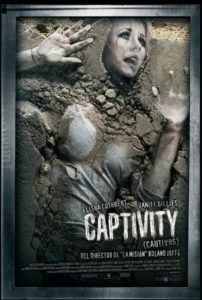 Twenty years ago director Roland Joffé was turning out seminal films like The Mission, for which he was nominated for the Best Director Oscar. Progressively, his quality of filmmaking dropped, his standards lowered, and now his letdown epitomizes with Captivity, a sleazy horror film sucking out the festering remains from what’s left of the torture porn subgenre. Outshining the movie is its doomed marketing campaign featuring advertisements with star Elisha Cuthbert in various stages of torture, posted around Los Angeles and New York. Each of the ads offered graphic images promoting the After Dark Films movie. Tasteless posters and billboards depicted frightened-looking Cuthbert silenced by a black glove with the word “Abduction” stenciled underneat; other posters followed the film’s progression, noting her character’s “Confinement”, “Torture”, and finally “Termination”. Angry ad victims complained, and Lionsgate, the distributors, asked that the posters be taken down. Rightfully so, I say—no one should have to endure even the suggestion of watching this movie.

Captivity attempts to involve the viewer in a drawn-out torture scenario, with Cuthbert’s character Jennifer Tree, a famous model, playing the victim. Jennifer is a lonely model-type we feel sorry for, because her life is so very rough tolerating photo shoots and swanky nightclub fundraisers. We watch from uncomfortable point-of-view shots as Jennifer is stalked by a faceless shadow. Seeing her through a digital video recorder wherever she goes, we almost enter Peeping Tom territory, except without all that brilliance inherent to Michael Powell. Here, we never really get to know our villain, possibly because we’re meant to identify somehow with him. Joffé’s camera suggests that we are the voyeur, watching Jennifer as her drink is drugged and she slowly passes out, seeing only a leather glove here and there, and then finally it covers her mouth.

When Jennifer awakens, she’s in a kind of cell, complete with bed, television, a vase of flowers, and a rack of clothes. The TV plays clips from her own interviews as a model; there’s also an advertisement displayed featuring her photo. Her captor seems to know everything about her, mostly because he watches too much TV. All at once, gas fills the room. When she awakens, she’s tied to a dentist-type chair. A large man with a black hood, black trench coat, and black leather gloves plays a video featuring another woman in Jennifer’s current position. The torturer, on the video, turns a knob and gives the other victim an acid shower. Jennifer’s torturer turns the knob for her and everything suddenly goes black. Jennifer awakens in her cell, once again shaking off her drugging, only to discover the previous stunt was just to scare her. The drugging occurs again and again, each time the torturer subjects her to some awful scare-tactic atrocity, drugs her, and she wakes up later in her cell. I lost count at ten, but I’m sure Jennifer’s drugged-up-and-scared-and-drugged-count approaches at least twenty.

Cuthbert’s role is mostly talking to herself, until her character finds she’s not the only prisoner. Gary (Daniel Gillies) is on the other side of the wall. The two communicate only because their captor allows them too, as he likes to sit back and watch his prey. Jennifer and Gary form a silly bond too quickly, so that even though they know they’re under constant surveillance, somehow having sex seems like a good idea. (Note: If ever held in a sicko’s torture chamber where you know you’re being watched, and you meet a nice guy, wait until after escaping to explore a sexual relationship.) Cameras and TVs are everywhere in wherever Captivity takes place. From more point-of-view positions we see a TV playing home video of a drugged-up mother apologizing to her son for touching him. These are presumably flashbacks. The boy, probably the killer, unexpectedly stabs the mother and photographs her dead body with a Polaroid. Somehow the boy had multiple cameras, since the home video flashback sequence is riddled with intermittent cuts. The film later suggests a second party that might have filmed the murder, but even when that person is revealed in a subsequent home video flashback, the only conclusion is that there was a third party filming it all. It seems that Joffé forgot to consider who was making that video, because whoever they are, they needed multiple angles to sufficiently film this matricide.

The kidnapper is played by twitchy-eyed actor Pruitt Taylor-Vince, whose filmography is more than concerning. Here, he plays a torturer of innocent women. In Identity (2003), he played a multiple-personality-disordered murderer. In an episode of The X-Files entitled “Unruhe”, he played another murderer. And in an Emmy-nominated guest appearance on Murder One, he also played a murderer. Either this guy’s been typecast or he’s got some major issues.