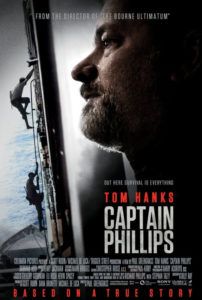 In April 2009, the container ship Maersk Alabama departed from Oman en route to Kenya with Captain Richard Phillips at the helm, hauling nearly one-third of its 17,000 metric ton cargo as relief supplies to Somalia. Well aware of recent advisories about the treacherous waters swarming with Somali pirates, Phillips issued strict orders to his crew of 20 to carry out security drills. Following strict protocols, pirate gates and doors to sensitive areas were locked, and repellant water curtain hoses were secured alongside the ship. Nevertheless, Phillips’ ship was boarded by four Somali pirates. While most of the crew hid in the engine room and rendered the ship inoperative, Phillips and his bridge crew contended with the pirates who penetrated the ship’s defenses. But the raiding party soon lost control of the situation and resolved to escape in a lifeboat with Phillips as a hostage and bargaining chip. As the pirates made their way to the Somali coastline, they were confronted by the U.S. Navy and Navy SEALS, and demanded millions in exchange for their hostages. The three-day ordeal ended with Navy sharpshooters killing three of the pirates and arresting the fourth. Captain Phillips, on the surface, was left unharmed.

Director Paul Greengrass brings this perilous story to life in Captain Phillips, a gripping and urgently made picture that delivers an exhaustive moviegoing experience, not to mention an incredible emotional wallop, particularly in the final scene. The screenplay by Billy Ray (Breach) was based on Phillips’ own account, co-written by Stephan Talty, in the memoir A Captain’s Duty: Somali Pirates, Navy SEALs, and Dangerous Days at Sea, the story of an Average Joe caught up in a terrifying hostage crisis. In that sense, the film resembles Greengrass’ docu-drama approach in his 2002 film Bloody Sunday, about the 1972 shootings in Northern Ireland, or his 2006 release United 93, which reconstructed the real-life hijacking and heroic uprising on the ill-fated 9/11 aircraft. Like those films, Captain Phillips isn’t romanticized, and, more importantly, resists taking a political stance on the incident as the director’s other films have in the past. Here’s a daring reconstruction in which the presence of any otherwise typical Hollywood formulas is forgiven because, in fact, the events actually occurred.

Tom Hanks plays the eponymous merchant mariner, and the star’s general amiability and immediate presence help make Captain Phillips an unassailable figure. Early on, Hanks shares a scene with Catherine Keener, appearing as Phillips’ wife at their home in Vermont. In an excellent display of the understanding achieved only after years of marriage, Mrs. Phillips drops her husband off at the airport and says an unsentimental goodbye, though he’s obviously having trepidations about his mission, the threat of pirates, and the lack of security on commercial freighters. On the other side of the world, in Ely, Somalia, impoverished young African men carrying rifles are impelled by bandit leaders to take to the sea and claim a prize for which they can demand a ransom. The pirate leaders, who describe themselves as fishermen, select their crewmembers from a crowd, all desperate for work. Once the selection is made, they board two skiffs and head onto open water to catch their haul.

Very much a tale of two captains, the film kickstarts when, in the middle of Phillips’ security drills, their radar picks up two skiffs on an intercept course with his ship. Through binoculars Phillips can see they’re pirates, and he even manages to repel the initial assault. But during a second push, the severe pirate leader Muse (Barkhad Abdi), who has killed a wayward comrade to prove his bravery to the others, manages to get his crew onboard the Maersk Alabama, including the barefoot teenager Bilal (Barkhad Abdirahman), at edge Najee (Faysal Ahmed), and apprehensive navigator Elmi (Mahat M. Ali). We watch as Phillips tries to guide Muse away from his crew, keeping calm and doing whatever he must to ensure their safety. But Muse insists, “I’m the captain now.” This statement doesn’t feel true until later when, after Phillips has been taken hostage, Muse captains the lifeboat, reassuring his hostage, “Everything’s gonna be all right.” Despite Phillips’ fate being a matter of historical record, nothing about the situation feels all right—not even after the Navy SEALS (headed by Max Martini) arrive to negotiate.

When applied to his aforementioned historical recreation titles, or even in pseudo-real-world fare like Green Zone, Greengrass’ cinema verité style has the advantage of putting the audience in the action and making the film seem “more real” when realism is the desired effect. In the director’s actionized spy-thriller entertainments, The Bourne Supremacy and The Bourne Ultimatum, his shaky-cam method proves rather distracting and at times harmful toward our comprehension of a given scene, relying on superficial techniques like a wobbly frame and fast cuts to replace actual thrills. In Captain Phillips, cinematographer Barry Ackroyd’s gritty image and unsteady camerawork, drastically reduced from Greengrass’ earlier uses, flawlessly balance with the film’s authenticity to fuse the viewer with the story. Christopher Rouse’s rapid-fire editing also cross-cuts not only between the two captains, but later between the Navy and the hostage situation, yet also keeps this complicated state of affairs exceptionally clear. For the duration of the film’s 134-minute runtime, there’s never a moment where we doubt or question what we’re seeing.

Captain Phillips isn’t another chivalrous Hollywood tale about a gallant white American emerging from the threat of dark-skinned, third-world foreigners. Greengrass manages some deeply rich moments between Phillips and Muse, suggesting an indistinct kind of sympathy for Muse’s desperate sense of responsibility as a captain. Abdi, a first-time actor like his fellow Somali costars, lends the performance unexpected layers. However, Hanks’ turn as the titular character is a masterstroke and certainly one of the best performances in his career next to Cast Away, Forrest Gump, or his half-dozen roles in Cloud Atlas. He isn’t playing a hero in the traditional definition; rather, Phillips is a survivor, enduring an unthinkable set of circumstances with two faces: one with the composed disposition he must show the pirates, the other filled with fear. When Phillips is finally released in the picture’s last scene, Hanks gives a display of wordless shock and trauma that have an unspeakable emotional effect. As Captain Phillips ends on this note, it leaves the viewer finally able to release the film-long tension that’s built up without a moment of reprieve, and this evacuation of emotions can result only in an outbreak of tears and exhaustion.

More impressive even than Hanks’ arguably career-best performance is how Greengrass sustains such pressure and seemingly palpable tension throughout a film, even though the majority of the audience knows how it will end. Captain Phillips doesn’t make us wonder if Phillips will survive; it asks how he will survive and what horrors he’ll have to endure before he’s free. Greengrass overwhelms his audience with authentic physical details in a profoundly impressive display of verisimilitude. What’s more, watching the lovable Hanks apply his humanist persona to a volatile situation is fascinating and involving, and his performance is the film’s immediate standout attribute. And yet, on every level, from the purely technical to the dramatic dynamic between characters, the film is brilliantly realized. Greengrass puts you through the trauma and leaves you almost as shaken as the film’s protagonist when it’s over. Captain Phillips is easily the director’s best work to date, combining his verité instincts with material both accessible and apolitical, and in turn, delivering an intense and unforgettable true story of survival.