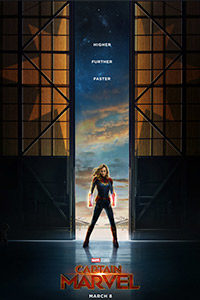 About midway through Captain Marvel, the titular hero Carol Danvers, played with energy and charm by Brie Larson, speaks to a member of the Skrull, an alien race making its first appearance on Earth. The scene takes place in a country house, where the Skrull makes references to “jazz hands” and annoying neighbors who come over to borrow sugar. Somehow, the lizard-faced alien is familiar with such Earth-specific references. But when someone threatens to put their foot “where it doesn’t belong,” the Skrull is confused by the saying. Where will they put their foot, he wonders? It’s baffling that a humanoid from another planet knows the concept of jazz hands or the outmoded practice of borrowing sugar from one’s neighbor, yet he cannot decipher a threat of bodily harm. Seemingly inconsequential, incongruous details and Huh? moments like this accumulate in the script and threaten to unravel the first female-centric entry in the Marvel Cinematic Universe. With a story credited to five writers and a screenplay credited to three, the film feels underwritten in areas and scattershot in others. And in general, it doesn’t have the usual surface polish one anticipates from a Marvel production. To be sure, though Captain Marvel arrives with high expectations for what it represents both on and off the screen, it underwhelms in its sheer averageness.

Two of the credited writers, who co-authored the script along with Geneva Robertson-Dworet, also directed. Anna Boden and Ryan Fleck, the filmmaking duo behind Half Nelson (2006) and Mississippi Grind (2015), make the leap from indies to blockbusters here. But the result feels like a necessary puzzle piece to the forthcoming Avengers: Endgame, not unlike the way Captain America: The First Avenger (2011) was an obligatory precursor to The Avengers (2012). Perhaps Marvel Studios and its president Kevin Feige focused their energy on perfecting the larger crossover efforts, like last year’s superb Avengers: Infinity War, and so Captain Marvel didn’t receive the usual close attention and care of other titles in the MCU—it certainly feels that way. The bread-and-butter aspects of the MCU that viewers might take for granted, such as a strong focus on characterization and cohesive storytelling, stumble here at the script level, leaving Captain Marvel to feel like a disappointment. It’s not that this is a bad movie. At times it’s very funny and fast-paced. There’s an unexpected twist or two. It has a basic spectacle appeal. But there’s not much to the central character. 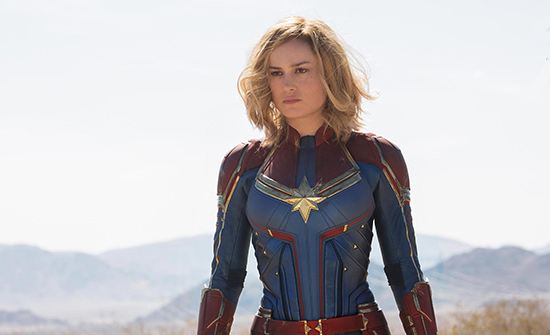 Similar to many Marvel superheroes, Captain Marvel borrows from an established DC Comics icon, Green Lantern, in that both characters were U.S. pilots who, after a crash, join a group of intergalactic space cops. Although the Captain Marvel character was created in 1968, the film borrows many of her traits from a recent iteration in the comics penned by Kelly Sue DeConnick, including the character’s star-laden costume to her rebellious attitude. When the film opens, it’s on the technologically advanced Kree planet Hala, where our hero Vers (Larson) suffers from amnesia, yet she trains under Yon-Rogg (Jude Law) to become a bona fide member of the Kree’s Starforce. Fragmented images flood her mysterious dreams, suggesting that Vers had a past on another planet—one vaguely reminiscent of Top Gun. Yon-Rogg warns her that emotions and dwelling on the past are signs of weakness, and to gain approval from the Kree overseer, known as the Supreme Intelligence, she must control herself. But rather than submit to the notion that emotions prevent women from doing the same quality of work as men, Vers eventually proves that her emotions are her strength. Things accelerate when Vers is separated from her other comrades during a mission to stop the Skrulls, a shape-shifting species known to infiltrate and take over other planets.

Soon enough, Captain Marvel turns into a kitschy, ‘90s-era comedy more interested in nostalgia than developing its hero. In her pursuit of the Skrulls, she ends up on Earth, here dubbed planet C-53, which is described as “a real shithole” by the Kree—a remark reminiscent of Donald Trump’s view of other countries. She finds herself in Los Angeles in the mid-1990s and teams with S.H.I.E.L.D. agent Nick Fury (Samuel L. Jackson) to stop the Skrull leader Talos (Ben Mendelsohn) from a worldwide takeover. The plot has an Invasion of the Body Snatchers quality given the Skrull’s ability to mimic the appearance and DNA of anyone they see. Her amnesia, combined with the throwback setting, makes for a predictable amount of both fish-out-of-water and flashback-to-the-‘90s humor. The screenplay relies on countless references from the era, including humor about the slowness of AOL internet and CD-ROM load times, a nod to Blockbuster Video, and countless alternative rockers (Garbage, Hole, Nirvana, etc.) on the soundtrack. One of the big fight sequences near the climax is set to No Doubt’s “Just a Girl”—a choice that emphasizes the film’s rousing feminist intentions, albeit in the most unsubtle way imaginable.

Over the course of the film, Vers learns that she was originally an earthling named Carol Danvers, and she’s been imbued with untold powers that, even by the final scenes, never become clear or well-defined. The same goes for the character. Carol Danvers is an uncertain personality full of pluck and quips, but she remains caught between the flashes of her former self in her dreams and the hero she has the potential to become. She’s a hero that, not unlike this film within the greater MCU continuum, feels out of place and in need of situating amid off-screen contexts to fully appreciate. Her past is vague at best, captured in a series of all-too-brief snippets of her memory, and her future will play a crucial role in the next entry, Avengers: Endgame. She spends the duration of Captain Marvel in a state of uncertainty, serving up a shallow relief rather than the strong personality that so many Marvel characters are. And though her former Earth friends Maria Rambeau (Lashana Lynch) and Dr. Wendy Lawson (Annette Bening) help bring some dimension to the character, she’s never an in-depth personality—she’s someone defined by what other characters say about her, as opposed to what she does. Only by the final scenes does it seem as though Carol Danvers understands herself, but before we learn more, the film has ended. 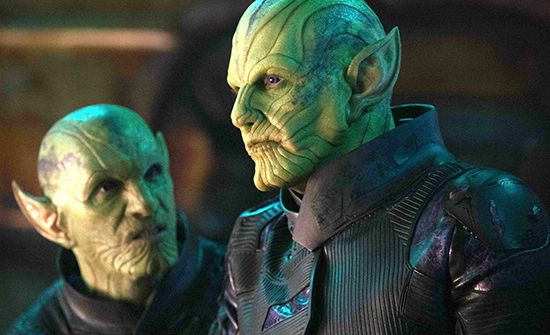 Larson does well with the character as it’s written, but the talent of this Oscar-winning performer far exceeds the limited emotional range of Carol Danvers. Still, Larson is affable enough that her screen presence goes a long way to make up for the deficient writing. Though, she has excellent chemistry with a digitally de-aged Jackson—a flawless demonstration of the effect (the appearance of Clark Gregg’s de-aged Agent Coulson is less successful). There’s also a cute cat named “Goose” who steals its every scene and provides some of the biggest laughs. Mendelsohn also does much with his complex villain, making him funny and empathetic. Visually, Captain Marvel is one of the least striking entries in the MCU and only slightly better looking than Thor: The Dark World (2013). Uninspired designs for the Supreme Intelligence, for instance, are painfully forgettable and cheap-looking. Boden and Fleck have trouble creating clear, effortless action, as the editing is a little choppy and hectic, leaving the film to feel not quite as top drawer as other MCU titles. Pinar Toprak’s score also fails to establish a memorable theme for the character, whereas the use of a few brief notes from Alan Silvestri’s score for The Avengers inspire.

Many have claimed that Captain Marvel is a film more interested in what it represents than what it is. Admittedly, the film wears its politics on its sleeve—a quality that’s not inherently a bad thing. For instance, Spike Lee is unabashedly political in last year’s BlacKkKlansman, but Lee also knows that a political statement in a film means little without three-dimensional characters to engage our emotions and invest us in the drama. There are scenes in Captain Marvel that do not occur naturally in the story, so they feel like forced statements, such as the No Doubt song—whereas others have been handled with a measure of elegance. An effective twist during the second act resituates our perspective to see perceived criminals and “terrorists” as living beings that do not deserve to be discarded. In a fascinating and unexpected turn, the Skrull become sympathetic and displaced immigrants, while the Kree fanatic Ronan the Accuser (Lee Pace) would prefer to wipe them out of existence. Elsewhere, the final bout between Carol and the real enemy is also a perfect demonstration of a woman who refuses to play by the rules established by men. Even so, it’s not difficult to see that Wonder Woman (2017) made more of a feminist impact by simply telling a compelling story and not overemphasizing the point.

Whether Captain Marvel is successful in its attempts to assert Carol Danvers as a strong female character demands some consideration. If by “strong” you mean physically powerful, as well as capable of flying and shooting energy beams out of her hands, then sure, Carol Danvers is a strong character. However, she’s not strong in the sense that she’s well-defined or follows a personal code. She’s not a dynamic character—she’s brave, sometimes even a rebel; she’s curious about her past; and she trusts her instincts, even if she sometimes makes mistakes. She’s admirable but not engaging. That characterization doesn’t amount to much, nor does it give her much room to grow, besides filling in informational gaps in her past. That she spends much of the film in a state of flux, caught between her past and future, is not very commanding or inspiring. Thus, the issue might be one of structure. Had we followed Carol from pilot to space cop to Captain Marvel, the journey might have been more involving. Unfortunately, the lackluster writing and serviceable production diminish the basic thrills we expect from the MCU, making Captain Marvel a letdown, if only because of its vast potential. It remains diverting, and that’s all. At the very least, the film boasts a touching tribute to the late Marvel Comics legend Stan Lee, including his best cameo yet.