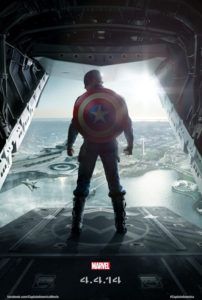 When Marvel Studios merges their standard comic book stories with another established genre, the result usually speaks to the vast range and potential of superhero adventures in general. Thor, for example, contained elements of both Shakespearian drama and fantasy epic, even with its “comic book movie” standing. And where Captain America: The First Avenger was a tried-and-true World War II actioner filled with dutiful heroes and a villain with a Nazi-red cranium, its sequel, Captain America: The Winter Soldier, ventures into espionage thriller territory—complete with deadly assassins, encrypted files, internal moles, but also, in proper superhero movie form, a grand scheme for world domination. Moreover, The Winter Soldier stands alone, as opposed to The First Avenger’s status as a building block to The Avengers, and refreshingly contains enough intrigue to entertain non-fanboys with its twists and turns, grounded action scenes, political insight, and surprising character depth.

For the uninitiated, Captain America: The First Avenger turned true-blue American hero Steve Rogers (Chris Evans) from a 95-pound weakling into a 240-pound super soldier. Tasked with delivering a can of whoop-ass to the Nazis’ science-fictiony offshoot HYDRA, Rogers succeeds only to be frozen in the ice for 70 years. Unfrozen in the present day by S.H.I.E.L.D., he’s displaced in spite of joining a band of quarreling superheroes in The Avengers, and along with them saves the world from an alien threat. Heroism and much public adoration aside, Rogers feels out of place in modern society when The Winter Soldier picks up. He’s a “freedom” preaching patriot in a cynical world where—in the age of information, digital footprints, and satellite tracking—freedoms are sacrificed in the name of security. For Cap, this proves to be a culture shock and the fundamental problem with S.H.I.E.L.D., as overseen by his boss Nick Fury (Samuel L. Jackson). A new S.H.I.E.L.D. initiative plans to launch three “helipad carriers” to hunt down threats before they happen, and the disillusioned Cap wants nothing to do with how the agency is “holding a gun to everyone on Earth and calling it protection.”

Not even Fury wants the helipads launched until he can investigate their programming further. But Secretary Alexander Pierce (Robert Redford), head of the World Security Council in charge of S.H.I.E.L.D., argues that “To build a better world sometimes means tearing the old one down.” Pierce’s statement sounds questionably villainous, decidedly so after an international assassin called The Winter Soldier takes down Pierce’s opposition, Fury, and then sets his sights on Captain America, Black Widow (Scarlett Johansson), and anyone who helps them—in this case, ex-paratrooper Sam Wilson (Anthony Mackie), who dons mechanical wings to become low-grade Avengers member The Falcon. And as this mini-Avengers team investigates who’s behind what appears to be a conspiracy, they discover that not only is The Winter Soldier the Cap’s thought-dead friend Bucky Barnes (Sebastian Stan), but he’s part of a larger plot involving the return of some familiar enemies from The First Avenger —namely Dr. Arnim Zola (Toby Jones) and Zola’s HYDRA clan. 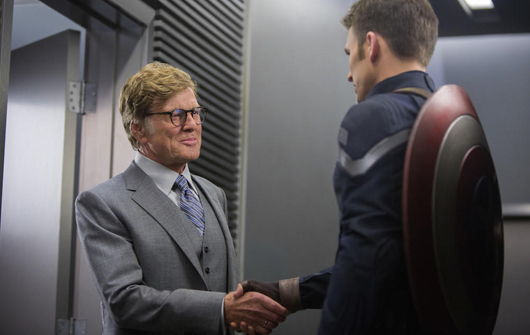 Structurally, the film’s first 90 minutes play like a slow-burning spy yarn in which the occasional shootout or high-energy fisticuffs heighten the paranoid tension, while the last act revolves around a full-blown spectacle of CGI effects and superhero action. A number of car chases are effectively shot and breathlessly exciting. Along the way, editor Jeffrey Ford cuts unsparingly, resulting in an action scene or two excessively chopped so that the viewer only gets the impression of what’s happened, but doesn’t actually see it. In other sequences the editing lessens, to be exact in the impressive bout between Cap and the metal-armed Winter Soldier, the enhanced strength and speed of the combatants delivering a wistful showdown. Brothers Anthony and Joe Russo direct, an unlikely choice for a Marvel adventure given the directors’ previous output on the film Welcome to Collinwood and You, Me, and Dupree, and one episode of Arrested Development. Certainly director Joe Johnston’s efforts on The First Avenger boasted a more striking production design and visual sense overall, but the Russo brothers have a more involving story to tell.

Screenwriters Christopher Markus and Stephen McFeely, who wrote The First Avenger, unintentionally tapped into a real-world parallel as Cap and Black Widow seek to uncover a major cover-up. Once they find evidence, they resolve to unveil decades of top secret data to the public, mirroring how Edward Snowden transmitted classified National Security Agency files online about a year prior to the film’s release. Does The Winter Soldier mean to venerate Snowden as a hero? Or was this association merely a coincidence? Paranoia, information control and containment, and technology that turns against its creators are major themes in The Winter Soldier. Black Widow acknowledges as much when, standing before a supercomputer, references War Games (1984) with the quote “Shall we play a game?” Regardless of being 90-years-old with a cultural gap of seven decades, Cap has actually seen War Games and gets the reference. Other references he doesn’t understand. One of the film’s more charming gags is when Wilson recommends that Cap listen to Marvin Gaye’s Trouble Man album. Cap takes out a small notebook and jots down the recommendation next to entries like “Nirvana”, “Star Wars”, and “Steve Jobs”—Cap’s cultural To Do list.

In moments like this, Evans adorns Rogers with a self-effacing yet virtuous personality, his boyish modesty refreshing next to the larger-than-life personalities of Tony Stark and The Mighty Thor. He’s perfect as a genial, idealistic Captain America, and it’s arguably the best performance Evans has given. Behind every smile is a sense of pain, behind every fight won the feeling that it’s meaningless, but he continues on nonetheless because it’s the “right thing to do”. Evans and Johansson share a few flirtatious moments that make us hope something more permanent is between them. To be sure, Johansson alone once again shows her Natasha Romanoff as a complicated character and not just a pretty face; here she’s forced to reconcile how, much like Cap, she has no place in modern society. Meanwhile, Redford goes against his long-enforced personal aversion to blockbusters to play the governmental flipside of his hero-against-conspiracy characters in All the President’s Men or Three Days of the Condor, making the most of his status as a screen legend. On the sidelines, Frank Grillo plays a particularly nasty and intimidating henchman.

Those who, like myself, saw The First Avenger as more of a step toward The Avengers than a film unto itself will find The Winter Soldier incredibly satisfying. Of course, it ends by setting up a planned third Captain America film and with a post-credits scene that hints at characters and events from the upcoming Avengers: Age of Ultron, but nevertheless, it works on its own. Quite simply, it’s a blockbuster about strong characters in relevant situations, all in an entertaining package. The vulnerability of this singular, black-and-white character in a world defined by shades of gray is a dramatic force that few other Avengers characters could achieve, and the filmmakers take their time re-building the character to invest the audience on an emotional level—as opposed to the attempted pure-thrills of most superhero fare. In channeling the paranoid spy yarns of the 1970s, Marvel has achieved one of their best, most engrossing titles in terms of pure storytelling. When so many comic book movies rely solely on expensive FX and mindless escapism, this one has much more to savor.