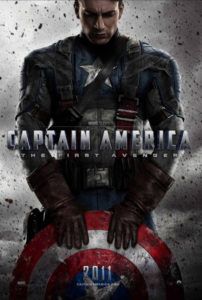 Marvel Entertainment and Paramount Pictures’ Captain America: The First Avenger marks their franchise’s final building block toward next summer’s The Avengers, a massive comic-style crossover where movie icons converge to form a team of world-saving superheroes. This unprecedented and ambitious goal has delivered some stellar components thus far, beginning with Iron Man in 2007 and continued most recently with this summer’s Thor. And until now, Marvel has done a wonderful job of forming each new addition into its own autonomous entity, fully developed and rounded without being merely another piece of the Avengers construct. This film, however, feels more like a preamble to The Avengers, as the title suggests, complete with unresolved character arcs and an arguable anticlimax that leaves audiences wanting far more than your average blockbuster would traditionally allow.

But if Captain America’s primary fault resides in its incompleteness, then so be it. There’s plenty else to enjoy here, even if structurally the story amounts to little more than a prolonged character introduction to the titular hero. Director Joe Johnston (The Wolfman) and production designer Rick Heinrichs (Sleepy Hollow) imbue an abundance of throwback style for this World War II-set yarn about American super-soldiers and Nazi occultists. Bookend modern-day scenes seem pointless except to explain why the hero shows up in The Avengers, and so the film remains at its best when establishing how Steve Rogers (Chris Evans), a 90-pound weakling from Brooklyn, transforms from pipsqueak to a chiseled mass of muscle and patriotism. The trouble is, how he gains his powers and earns his costume make up the most exciting parts, whereas screenwriters Christopher Markus and Stephen McFeely don’t spend as much time as they should showing us how he uses them.

High production values and Johnston’s eye for the era’s romantic wartime iconography steal the show in early scenes, where Rogers is repeatedly denied entry into the U.S. army because of his frail body. Observing the young man’s bravery and desperation to do good, scientist Dr. Abraham Erskine (Stanley Tucci) selects Rogers for a top-secret experiment, overseen by Col. Chester Phillips (Tommy Lee Jones, perfectly cast), to make a super-soldier with accelerated speed, strength, and healing abilities. At first, CGI renders Evans into a short, frail weakling; after, Evans trained and reshaped his body into a comic book musculature—both are equally impressive displays. As the story progresses, Rogers falls for a girl, Agent Peggy Carter (Hayley Atwell), and politics get in the way to reduce Rogers, now dubbed “Captain America”, into a propaganda figure to sell war bonds and inspire national pride (but luckily, the film avoids any saturated pro-America propaganda itself). But Rogers, knowing what it’s like to be picked on from his pipsqueak days, dreams of taking down the ultimate bullies: The Nazis. 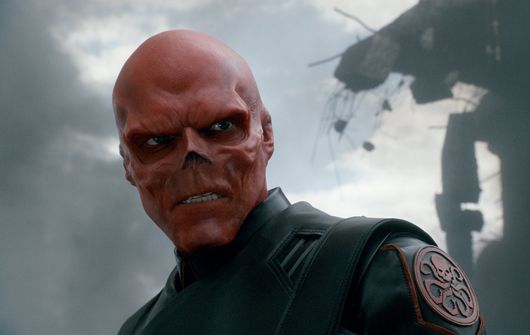 But Nazis aren’t nearly twisted enough for superheroes! Undermining those small-minded fascists is their independent science division, HYDRA, whose leader Red Skull, played by Hugo Weaving (who, under some slick looking makeup, combines a James Bond-esque villain with his best impersonation of Werner Herzog) breaks free of Nazi rule and plans its own takeover. Red Skull harnesses the power of the Cosmic Cube (see the post-credits sequence from Thor for further explanation), a MacGuffin of infinite energy, with hopes of world domination. With the help of inventor Howard Stark (Dominic Cooper), Iron Man’s dad, Cap gathers himself a fancy boomerang-shield and adopts a motley crew of borderline anonymous cohorts (including Neal McDonough, Derek Luke, Kenneth Choi, J. J. Feild, and Bruno Ricci) to stop the HYDRA threat, which happens, unfortunately, in short order.

The filmmakers have fun rewriting history with futuristic gadgets and highly stylized vehicles, all with past-meets-future touches that recall Sky Captain and the World of Tomorrow, as well as another Johnston film, The Rocketeer. Throughout, the special FX deliver such top-notch visuals as we’ve come to expect from Marvel productions. But at the height of when these elements should come into play—during Cap’s raid on various HYDRA hideouts—the film breezes over them in an underwhelming taking-down-the-bad-guys montage. Before you know it, Cap and Red Skull are having their inevitable faceoff, which concludes with suspicious open-endedness. A flash of light. A shot of space. Apparently the fight is over. What just happened? Who can be sure?

Though present in comics since 1941, Captain America has never had the dramatic weight or popularity of Spider-Man or the X-Men; Steve Rogers simply isn’t a dynamic character. But he’s a heroic one. As disapproving as this review may seem, Captain America remains an admirable summer blockbuster and easy piece of entertainment. With another twenty minutes and a more wowing finish, though, it could have been more satisfying as a whole. Nevertheless, superhero movie fans will find themselves in bliss, taken by the somewhat surreal, certainly atypical notion that Hollywood would bankroll a comic book movie that’s almost entirely period piece. To see Captain America in a WWII backdrop battling Red Skull on the big screen is every fanboy’s dream, and Johnston delivers the goods. The experience won’t feel complete, however, until next summer. That unfortunate detail leaves this relative “episode” feeling like an obligatory step towards something bigger and better. One can only hope The Avengers lives up to expectations.