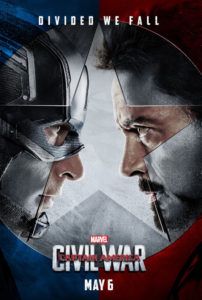 A cinematic superhero crossover to be reckoned with, Captain America: Civil War could have easily been a third Avengers film, given its dozen or more superhero characters; what’s more, it contains rather weighty themes of revenge and how to deal with the sometimes tragic consequences of superhero actions. Under the clear idealism of Chris Evans’ titular Cap, the film tunnels through an emotional core to discover more than just rousing superhero action (although there’s plenty of that, too). In fact, it’s superhero-against-superhero action, creating a whole film out of the best parts of The Avengers when the inner-squabbles between Earth’s Mightiest Heroes turned to blows. Among the best entries in the Marvel Cinematic Universe thus far, the entire production of Civil War is a testament to the Marvel film factory, from its breathless set pieces to its sharp exploration of several characters, all within an intricate plot. Directors Anthony and Joe Russo, who helmed the gets-better-every-time Captain America: The Winter Soldier, show incredible confidence in their filmmaking, resulting in a rare superhero film of entertainment and substance on a huge scale.

Arriving on the heels of another superhero-versus-superhero title, Batman v Superman: Dawn of Justice, Marvel’s film proves it doesn’t require a dour tone to deliver a comic book spectacular with gravitas. Nor does every action scene require pitch darkness and rain. Initially, Warner Bros. wanted their DC mash-up to debut on the same day as Civil War. Marvel wouldn’t give up the date, and perhaps out of uncertainty about their muddled film, Warner Bros. soon shifted their release to over a month earlier. A good thing, too, since the critical and fan reception of the former has been largely negative to abysmal, whereas Marvel’s latest confronts critics in fans but only in good ways. Indeed, writers Christopher Markus and Stephen McFeely (MCU writers since Captain America: The First Avenger) incorporate—perhaps unintentionally—an echo of the current political climate, where ultra-polarized parties can’t stop fighting long enough to solve any real problems, or think of the consequences of their in-fighting. And yet, the scripters imbue the material with plenty of levity during the 146-minute production, which somehow breezes by and feels light as a feather, despite some heavy stuff happening onscreen.

Civil War was adapted from the limited 2006-2007 comic book series of the same name written by Mark Millar and penciled by Steve McNiven, one of the best comic storylines this critic (and former comic aficionado) has ever read. Just as Iron Man (2008) launched a bold new era of superheroes and The Avengers (2012) synthesized multiple heroes into an incredibly fun and engaging extravaganza, the adaptation of Civil War feels like a watershed moment in the MCU, both from a story perspective and in terms of pure filmmaking. Winter Soldier donned a ‘70s spy-thriller cover, Ant-Man was a heist comedy, and Guardians of the Galaxy was a sci-fi fantasy, but the strength of Civil War‘s narrative far outweighs the need to apply a preexisting genre. However, an in-film reference to The Manchurian Candidate wasn’t by accident; like John Frankenheimer’s 1962 classic, Civil War features a brainwashed character dealing with the emotional downfall of his condition. And like that film, it’s also paranoid, conceptually frightening, and challenging at every turn. 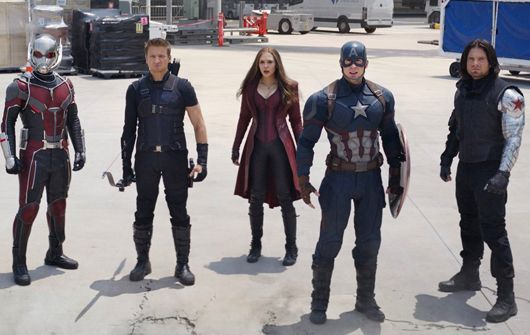 At the end of Winter Soldier, Captain America and his friend Sam Wilson, aka Falcon (Anthony Mackie), began looking for Cap’s old friend Bucky (Sebastian Stan), a former mind-controlled HYDRA assassin on the run and trying to remember his earlier self. In the meantime, a series of public incidents (most prominently those in Avengers: Age of Ultron) has led world governments to conceive the Sokovia Accords, a document headed by the dogmatic Secretary Ross (William Hurt, reprising his role as the governmental nut from The Incredible Hulk), stating all super-beings are restricted from using their powers unless ordered to do so by the United Nations. Feeling a grave sense of responsibility for lives lost in Sokovia, Tony Stark, aka Iron Man (Robert Downey, Jr.), signs away his superhero rights and asks others to sign as well. He’s joined by the synthetic person Vision (Paul Bettany), the military man War Machine (Don Cheadle), and shockingly Black Widow (Scarlett Johansson), the latter of whom seems to see both sides of the argument, but refuses to fight the impending tide.

Captain America doesn’t see registering or restricting his super-human heroism as a positive change; he views it as putting a committee in charge, possibly subjecting the Avengers to specific political agendas. He finds sympathizers in Falcon, the unpredictable Scarlet Witch (Elizabeth Olsen), back-out-of-retirement Hawkeye (Jeremy Renner), newly recruited Ant-Man (Paul Rudd), and eventually Bucky—though it was Bucky’s alleged activities in the first-half of Civil War that make any counterargument to the Sokovia Accord impossible. Those who refuse to sign and use their super-powers anyway become wanted; they’re soon tracked down by Ross and thrown into a floating prison in the sea. Inevitably, as Cap tries to protect his friend Bucky from those who would take him out, the ideologies implode, and friends face one another on the battlefield. From there, the story becomes more complicated with the inclusion of Daniel Brühl’s mysterious character Zemo, who schemes to get closer to Bucky for reasons unknown.

Although the presence of Zemo should not be overlooked (Brühl makes a nefarious, tragically influenced villain), the most nuanced performances belong to Evans and Downey, as one might expect. Despite his character’s all-American frontage, Steve Rogers has been increasingly disenchanted by the modern world, his ‘40s idealism rocked by harsh doses of today’s cruel reality. Evans carries that pain under the surface with a just-detectable sadness beneath his unpopular optimism, and Johansson’s role furthers that sadness with her character’s similar duality. Downey offers Stark the first moments of genuine emotion we’ve seen from the ever-quipping character for several Marvel films, deepening his conviction and showing a more responsible, weighed down, and wounded character. Since both Cap and Iron Man are devoted to the ideologies concerning superhero registration, the depth of the team members who join forces with them are enhanced through association—though many of them may have only one or two scenes to shine. Still, the roles deepen even further by the final fight, inciting audible gasps at a late-film development that few will see coming, because it’s a horrifying revelation more than a twist. 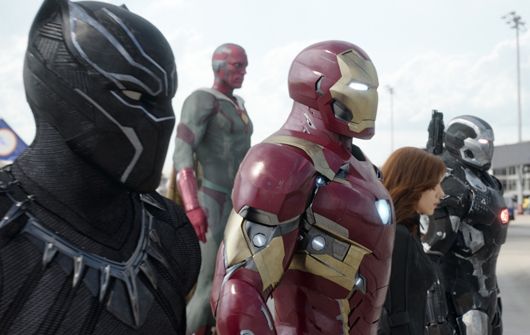 Most crucial to the story in terms of new Marvel characters appearing in the MCU is Chadwick Boseman’s T’Challa, aka Black Panther, whose African home Wakanda is the source of vibranium, and who gets his own solo film in 2018. When his father is slain, presumably by Bucky, T’Challa seeks revenge, but he’s not so blinded by his rage as other characters. Also appearing is youngster Tom Holland’s Spider-Man, the character brokered from Sony in a landmark deal. Though the teenaged web-slinging hero played a pivotal role in the comic storyline, it’s lessened here (somewhat of a letdown to the comic series’ readers, but no less welcomed. Holland shines in his few scenes. Though, this marks the third onscreen iteration of Spidey, and it’s hard to say yet whether Holland will surpass Tobey Maguire, though he shouldn’t have any trouble outperforming Andrew Garfield (we’ll find out for certain when Holland’s solo film Spider-Man: Homecoming debuts in 2017). The film also contains a fine supporting cast: Marisa Tomei makes her first appearance as Peter Parker’s quite young Aunt May; John Slattery and Hope Davis appear as Tony Stark’s parents; Martin Freeman has a distractingly small role as a task force commander working with Secretary Ross; Alfre Woodard, John Kani, and of course Stan Lee appear as well. There’s also a nice romance developing between Cap and Sharon Carter (Emily VanCamp), the former S.H.I.E.L.D. agent assigned to keep tabs on him and Peggy Carter’s niece.

Each action set piece—with the exception of the shaky-cam opener set in Lagos, featuring Winter Soldier’s Frank Grillo as the villain Crossbones—looks amazing and showcases impressive choreography, stunt work, and special FX. This is all standard for the MCU, of course. When Bucky or Cap strikes someone, and that unfortunate person goes flying across the room, the audiences feels it as the poor sap crashes into a wall and leaves a dent (or flies right through said wall). Most impressive is the six-on-six battle at an airport, where the film’s engorged roster of superheroes clash in a wowing sequence. Here we see supporting players like Ant-Man (Rudd is as jokey as ever) and Spider-Man (also very talky, which Falcon points out) showcase their abilities in surprising ways. Fortunately, the potential for collateral damage has been mitigated in this rumble, allowing viewers to lose themselves the sheer spectacle of watching our favorite onscreen heroes do battle with one another, without risk of the needless death that incited the entire film. Only The Avengers outperforms Civil War in terms of earthbound size and scope.

After the dust settles and our heroes have begun to lick their wounds instead of inflicting more of them, we’re left with much to consider about the role of super-powered characters in the MCU. It’s nice to know the filmmakers are weighing these ideas in a serious way. These superheroes inhabit a world in which people die; in that sense, it’s very realistic in spite of the inclusion of inter-galactic gemstones, gamma radiation mutants, and alternate spatial realms. The survivors of superhero violence have some very strong feelings about what’s happened to their loved ones. With any luck, some tense post-film debates will take place among viewers, because Civil War doesn’t provide a “right answer”, nor does it pick a side. Locking up superheroes who refuse to sign a piece of paper seems dangerous, because without them, a villain could do harm to countless innocents. On the other hand, how does the public reconcile when hundreds or even thousands are left dead after the events of The Avengers: Age of Ultron? Human beings need someone to blame when something bad happens, and super-humans are not immune to this. Captain America: Civil War creates a filmic conversation about this theme, and amid some remarkable escapist awe, leaves us thinking about its effect on our heroes in a purely dramatic way.