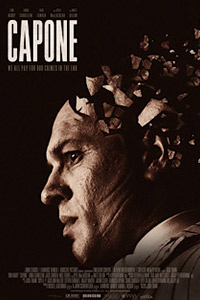 Tom Hardy’s penchant for borderline conceptual performances undoes Capone, an account of the Prohibition-era gangster’s final days. Hardy has made a name for himself with body transformations and occasionally unintelligible voices, and sometimes his commitment results in a tour de force performance (see Bronson or Mad Max: Fury Road), though more often the outcome proves to be an ambitious misfire (don’t see Legend or Venom). Playing the Chicago crime lord, Hardy inhabits a character decaying from the neurosyphilis he contracted as a teenager. He’s paranoid, deteriorating, prone to violent outbursts, and soils himself more than once in the film’s 104-minute runtime, which, under these conditions, feels like a three-hour endurance test. Watching the film is like sitting in a hospital room with a dying patient and eagerly anticipating their moment of sweet release. But unlike those last cherished hours with a loved one, we have no affection for Al Capone. He remains deeply unpleasant—more a shell of a man than a three-dimensional character. Just look at the poster, which shows Capone’s head disintegrating to reveal nothing of substance inside. It’s the perfect representation of Capone. Kudos to the marketing department.

Not unlike the titular character’s sharp decline following his 11 years in prison for tax evasion, Trank experienced a similar downfall in the 2010s. His directorial debut, Chronicle in 2012, supplied an inventive genre mash-up that landed him the chance to direct a major Marvel property for Twentieth Century Fox—along with rumors that he would direct a Star Wars film. But when he publicly clashed with Fox over Fantastic Four (2015), he earned a reputation as a “difficult” collaborator. Since then, the buzz about Trank has disappeared, and he’s been quietly working on Capone, a film that could be seen as his perspective on being ousted by mainstream Hollywood.

The independent production opens in 1947, the last year of Capone’s life, on the former crime boss’ tacky Florida estate accented by faux-Roman statues. Rotting from dementia and loss of bodily control, the 48-year-old Capone, here called “Fonzo,” looks about three decades older. The character’s last flickering moments of mental cohesion have gone the same direction as his legend, into a realm of indignity and humiliation that no longer resembles human life. He’s an assemblage of bodily failures: he urinates red-tinted infection into his pajamas, empties his bowels in bed, empties them again at a meeting with the FBI, hacks into a bucket, and may even ruin carrots for the near future.

With Capone’s body crumbling, most of the story takes place in his mind. The number of scenes in the here and now have been far outnumbered by those involving daydreams, hallucinations, memories, nightmares, and ghostly visitations. Except, unlike Robert DeNiro’s characters in similarly themed remembrances, Once Upon a Time in America (1984) or last year’s The Irishman, there’s no narrative cohesion to these mental images. Instead, Capone features long sequences of the character wandering around in his mind, grunting (his preferred method of communication) sounds of confusion and occasional recognition. The film employs some striking imagery along the way—such as a small boy with a golden balloon or Capone crawling through a pile of dead bodies—but the imagery doesn’t come with an associated emotion. There’s little idea of what these images mean to Capone, and the screenplay doesn’t allow the character to articulate himself outside of senseless muttering. Elsewhere, Trank’s screenplay confuses reality for illusion, if only to misdirect the viewer. Note the pointless sex scene that introduces Johnny (Matt Dillion), who must travel from Chicago to visit Capone in Florida. As it turns out, Johnny is dead. So did Capone dream up this introductory scene? Trank’s screenplay becomes so dependent on tricking the audience with Capone’s fractured mind that he sacrifices his film’s story logic and dramatic potential. 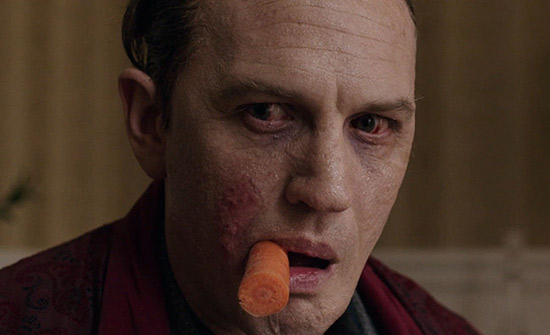 On the periphery, Trank has assembled an impressive supporting cast and technical crew. Linda Cardellini plays Mae, Capone’s wife who must watch her husband fall apart. Though Trank never grants the character an internal life, Cardellini’s presence lends Mae some pathos. Kyle MacLachlan appears as Capone’s doctor, who alternates between helping his patient and assisting the FBI. The authorities hope to uncover where Capone stashed $10 million, but his dwindling state prevents him from remembering the exact location. Although this “Where’s the money?” question drives much of the story, it’s difficult to care if either Capone or the FBI uncover its location. The same goes for answers about Capone’s illegitimate son, Tony (Mason Guccione), who periodically calls the house and remains silent. At least the film has been expertly shot by cinematographer Peter Deming, whose visuals, along with those overseen by production designer Stephen Altman, convey a believable period milieu.

Hardy’s makeup and overwrought performance do less to convince the viewer. Immersed in his impersonation of William Hickey from National Lampoon’s Christmas Vacation (1989), Hardy never disappears into his role. Al Capone always looks like Tom Hardy under caked-on makeup and a bad wig. His eyes, too, look downright vampiric, recalling the abortive attempt to make Johnny Depp blue-eyed to play Whitey Bulger in Black Mass (2015). It’s a performance marked by delirium and slack-jawed expressions of confusion, and the dialogue consists mostly of forced grumbles (“You sound like a dying horse,” Dillion’s character tells him). To be sure, Capone might be a grotesque masterpiece, where the body is a source of horrible abjection. And even though most of this proves unintentionally funny, there’s a genuinely effective sequence where the cracked Capone stands up during a home screening of The Wizard of Oz and sings “If I Were King of the Forest” in absent-minded confusion, finding some measure of recognition in the Cowardly Lion. It’s the highlight of the film, far more so than the extended sequence where Capone shoots down his entourage with a gold-plated Tommy Gun—Trank’s attempt to create his own “Say hello to my little friend!”-type scene.

But even if Hardy’s laughable performance wasn’t another of his misguided experiments—which, even in their failures, prove admirable for his commitment to their stunt-like quality—Capone would still be an intolerable mess. It plays like the last act of a larger Al Capone biopic, one that has already established a complex relationship with the character. But Trank hasn’t taken the steps necessary to create empathy for this hunk of human degeneration, and his series of flashbacks and hallucinations do little to establish the tragic intent. Moreover, Trank never invests us in basic story details, such as Capone’s fate or the location of the hidden loot, leaving us thoroughly unengaged. The filmmaker prefers to make jokes about Capone shitting his pants or having his cigars replaced with carrots to preserve what health he has left. Watching the film is like seeing a medical process performed; you look with equal parts revulsion and curiosity, but no degree of dramatic or emotional connection to the base sights on display.