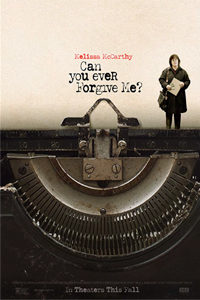 A prototypical release from Fox Searchlight, Can You Ever Forgive Me? explores a subject on the margins, yet it does so with a tastefulness and safeness that caters to mainstream audiences. Based on Lee Israel’s 2008 account of her criminal adventures involving forgery, fraud, and theft, director Marielle Heller’s Oscar-baiting project boasts a superb dramatic performance by Melissa McCarthy. Many critics and commentators have remarked that the usually raunchy comic performer has revealed a new facet of her talent, but those of us familiar with McCarthy’s role on Gilmore Girls know her range. She’s capable of playing broad characters in Bridesmaids and Spy—and a dozen other forgettable comedies in which she was typecast into superstardom—but rarely does she receive enough credit for something like her presence in 2007’s underseen The Nines. Perhaps her performance as Israel, an introverted and curmudgeonly cat lady who somehow proves endearing, will show audiences that McCarthy can do more than be the loud, crude, foul-mouthed presence in her comedies. Then again, Israel isn’t too far from McCarthy’s usual role: she drinks too much, swears like a sailor, and dismisses social decorum. Her so-called friends frequently describe her as an “asshole.” So why does she seem so loveable?

The film opens in 1991 when the Manhattan-based author struggles with a nasty case of writer’s block after publishing three modestly successful biographies (about Tallulah Bankhead, Dorothy Kilgallen, Estee Lauder). Worse, her agent (Jane Curtin) shows no interest in helping Israel acquire an advance for her next project, a book about vaudeville comedian Fanny Brice. Unable to pay the bills and only half-heartedly continuing her research, Israel stumbles on a letter typed by Brice in the archives. She takes it to a local bookshop to have it appraised. They could give her more for jucier content. So she takes one look at her sick cat, her apartment disgustingly riddled with flies, and quickly resolves to beef-up the existing letter. After selling it, she discovers a niche market that pays big bucks for personal correspondence written by famous authors. Rather than a temporary solution, however, it becomes her sole source of income. She gravitates toward witty and queer literary icons, either altering or altogether forging over 400 letters from names like Noël Coward, Dorothy Parker, and Lillian Hellman. In the collector market, she fetches hundreds of dollars for a single letter.

Chalk it up to the screenplay by Nicole Holofcener and Jeff Whitty that Can You Ever Forgive Me? manages to feel both edgy and safe in the same instant. Take the presence of Richard E. Grant, playing Lee’s unreliable but only friend Jack Hock, a reckless, homeless, and drug-addled gay man whose promiscuity is only matched by his love of pissing people off. It’s a turn that recalls Grant’s essential performance in Bruce Robinson’s Withnail & I (1987), where he played a debauched drunk on the ultimate bender. But Grant somehow becomes that banal crowd-pleasing trope of the gay best friend here, a character present in mainstream fare like My Best Friend’s Wedding or Mean Girls, albeit with more cocaine. Even at the height of his base behavior—in the midst of an ill-advised housesitting gig that ends in tragedy—he remains somehow incorrigible. Refreshingly, however, the two central queer characters never feel part of a film trying to exploit them for their sexuality.  She’s a lesbian, he’s a gay man, and that’s just who they are. They’re also an odd couple in a non-sexual relationship, and their friendship is sweet because it’s complicated and uneasy.

With that in mind, Israel’s criminal enterprise remains the least compelling aspect of Can You Ever Forgive Me?—her misanthropic and cynical worldview is far more entertaining. Take her stance on Tom Clancy, whom she decries for earning millions on “right-wing propaganda,” or her complete dismissal of New York’s elitist literary scene in general. Her behavior, pleasantly antisocial, also reveals uglier layers to her personality. For half of the film, the scenes in Israel’s apartment show an unkempt space of clutter, assorted papers, old typewriters, and bottles of booze. Only when she finally has enough money to pay for an exterminator do others (attempt) to enter her apartment, yet all but Jack are stopped by the smell, the source of which is gag-inducing. It’s around this time that the film begins to treat Israel less as a delightful rebel and more as someone genuinely troubled; it’s also the moment that gives McCarthy’s performance a new dimension beyond an alcoholic with a chronic inability to hold her tongue.

After her pleasant debut, The Diary of a Teenage Girl (2015), released by Sony Pictures Classics, Heller demonstrates that she’s a capable filmmaker who has no distinctive style, aside from those commonplace in a mini-major release. Here, the film’s brown color palette and straightforward editing choices capture the more distinctive 1990s setting, a pre-gentrification New York that still had independent bookstores on every corner, and gay hangouts were somewhat fringe. Those who lived through it, or are versed in the 1980s era of Woody Allen filmmaking, will recognize it. Predictably, Heller redeems Israel’s lowest moments with her teary-eyed speech in court at the climax, making her actions seem not so awful or, you know, criminal (ultimately, her forgeries led to six months of house arrest, some community service, and mandatory participation in Alcoholics Anonymous). And in a throwaway aside at the end, the film takes a cue from Orson Welles’ F for Fake by questioning the so-called experts who authenticated and sold Israel’s letters. Can You Ever Forgive Me? makes for an unlikely story of redemption, one that leaves its audience oddly appreciative of the artistry it took to carry out a fraud.