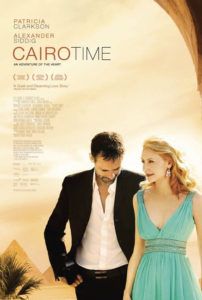 More a travelogue than a drama, Cairo Time is a quietly romantic piece from Ruba Nadda, a Canadian filmmaker of Syrian descent. It features handsome location shooting in Egypt and gives viewers a sense of the city more than its characters or story. We see busy streets always filled with people, colorful shops, ornamented cafés and mosques, the empty but gorgeous surrounding desert, and, of course, the pyramids of Giza, which are visible from almost anywhere in the city. But Nadda tiptoes around her subjects, both the city and characters, preferring to examine from a safe distance so that we might understand without ever really engaging.

The story follows Patricia Clarkson’s Juliette, an American magazine writer who arrives in the Egyptian capital to visit her husband, Mark (Tom McCamus), a United Nations officer delayed for the rendezvous because of trouble in Gaza. Instead, Juliette is met by Alexander Siddig’s character, Tareq, a retired U.N. official who has been asked to act as her guide until Mark arrives. For several days the sophisticated Tareq politely guides Juliette about the city in aimless wanderings, their conversations rarely voyaging outside of polite conversation. And yet, underneath their respectful association lingers the suggestion of perhaps something more. Juliette cannot help but be hypnotized by her surrounding, both in backdrop and immediate company.

Nadda’s approach works, in that as viewers we understand the basics, and in a way, the basics are all we need to know. Her screenplay keeps dialogue to a minimum, preferring to make statements through restrained emotions and understated commentary. There’s a definite criticism, for example, of the way the city’s women are treated and expected to behave. One day Juliette takes a walk by herself and finds a buzz of insistent men swarming around the sole Western woman by herself on the street. Later Juliette raises an eyebrow over the lack of education among Cairo’s young women. And she’s surprised at the men-only café where Tareq plays chess, asking “What do the women do?” Other things, he explains. They have a slight laugh later when she announces her intent to open a women-only café in Cairo.

Unless you know anything about Cairo, or the politics of the region, some of Nadda’s attempts at nuance will be lost. Several slight allusions are made that almost address important issues, but do not. Like Juliette, Nadda meanders around the city capturing this or that impression, and seems to have perfected the art of indirection, which is employed until the final frames. What Nadda captures so well, however, is the magnificence of the city. Cinematographer Luc Montpellier brings a languid pace amid pleasant visual landscapes; the audience is gracefully walked through busy streets and sometimes dangerous markets, but never truly grasps either the characters or their surrounding city. After the brisk runtime of just under 90-minutes, the experience feels temporary and curtailed by its tenuity.

Comparing Cairo to two would-be lovers that roam about in the splendor and complication of the city itself was a lovely idea from Ruba Nadda. It’s a perception that’s both romantic and perhaps a little naïve—a less involving version of David Lean’s Summertime, where Katherine Hepburn goes to Venice, Italy, falls in love, then returns home. The spare quality of the picture would almost give the film some meaning if Nadda’s intentions weren’t so oversimplified. But Cairo Time feels too much like minimalism lost somewhere inside its own indistinctness. It’s beautiful to look at, but when it’s over, the beauty quickly fades without something to bond our emotions with the picture.