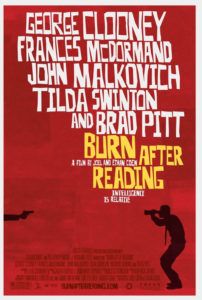 Please don’t misinterpret Burn After Reading as satire, though it toddles into the intelligence community and finds little intelligence to speak of. Rather, the comedy, from the writer-director team of Joel and Ethan Coen, takes itself as seriously as its characters take themselves. Which is very seriously. Consider the music composed by longtime Coen collaborator Carter Burwell, how in tone it seems to score a political thriller. And the Coens’ formal presentation avoids any deliberate signals that traditionally denote a farce, which this film surely is, and a riotously funny one at that. Populated with cartoonish types driven by oddly human desires, the film offers characters each more selfish, shallow, cold-hearted, and devious than the last. But the Coens aren’t making some misanthropic observation about humanity; rather, they’re just telling an elaborate, quite adept joke—the punch line being that these schemers are wrought by absurdist stupidity. Experts in such fare, the Coens have never before been so cynical toward their protagonists, and accordingly, so cruel in the construction of their fates.

Nincompoops all, the characters in this dark charade of witless dreamers and plans-gone-wrong enliven the screen with their collective ineptness: John Malkovich plays the ever-annoyed Ossie Cox, a CIA analyst who, instead of allowing himself to be demoted, quits to write his memoirs. He’s annoyed because no one seems to appreciate his intelligence, particularly not his wife Katie (Tilda Swinton), a cast-iron bitch if there ever was one. She plans to leave Ossie for Harry Pfarrer (George Clooney), a paranoid ex-secret serviceman with little more on his mind than exercise and intercourse. And Harry gets around, hooking up with women for casual sex through an online dating service, where he meets Linda Litzke (Frances McDormand), a physical trainer at Hardbodies Gym and obsessed with redefining herself via plastic surgery. Still, Linda’s boss (Richard Jenkins) loves her just the way she is.

Problems begin when Linda and her dufus co-worker Chad Feldheimer (Brad Pitt) find a copy of Ossie’s memoir discarded in a locker room and decide to blackmail him for it. Rather than going into any detail as to how these unrelated characters converge from that point, it’s enough to say that Burn After Reading illustrates the truths behind Murphy’s Law—everything that can go wrong invariably does, and when it concludes, the film does so with the Coens’ affinity for pitch-perfect endings. All the characters are tied like loops on a slackly-laced pair of shoes; as the picture progresses, we can see the Coens pulling the strings tighter and tighter until their story winds into an airtight knot.

Structured without a wasted moment, the outcome renders the entire picture meaningless. Even so, we’re never removed from our involvement. Observe how carefully each role has its purpose, aligned inside a groove that’s followed until its predestined conclusion. We trail along in the pseudo-spy yarn as willing participants, and when it unravels, that it circles back around and ties up every loose end is wonderful—for the Coens’ and their talent for etching out a grand design. It’s a touch of mastery that the Coens create human characters, perfectly real with all their ridiculous flaws, in some cases tragic, and amass them together for a daft, violent, comic tale.

The Coens never shy from violence, and they set-up brutal scenes in the last act not for the squeamish, comparing to the most virulent in their career: Think the wood chipper in Fargo, the unparalleled “Danny Boy” sequence in Miller’s Crossing, or Anton Chigurh’s reign of terror in No Country for Old Men. Without ruining any details or shocks, suffice it to say the ruthless poetry of the Coens remains intact. Strange that these scenes never feel exploitative or off-key, despite their graphic nature. As bleak as this film’s finale might be, it’s comedic, and punctuated by the disinterest of its ever-monitoring CIA, headed by an unconcerned suit portrayed with deadpan indifference by J.K. Simmons.

Reflecting on the cast simply leaves one breathless, as rarely are so many great actors in a single film. Pitt is unbelievably funny, committing to inanity as Olivier commits to Shakespeare—this is a performance that will have people talking for years down the road. Clooney’s two most animated, enjoyable roles are now both with the Coens (this, and O Brother, Where Art Thou?). And McDormand is just perfect, per usual. The screen seems to glow a little more than it should with all the talent glimmering before us, adding a welcomed level of star-struck awe to the production.

Burn After Reading is the Coens’ first original screenplay since their underseen (but stunning) 2001 noir effort The Man Who Wasn’t There. It reminds us how, through a pageant of original work over the last twenty years, they’ve become the dynamic duo of cinema, capable and innovative beyond compare. In setting up a spy thriller that, given the idiocy of its characters, just-so-happens to proceed like a comedy, the Coens’ best humorist qualities emerge after years of slumber, now well rested and ready to play.