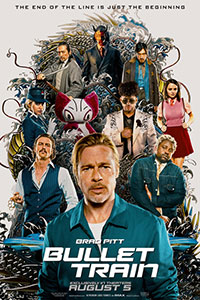 Bullet Train is proof that a star-studded cast can distract from a movie’s faults—mostly. If someone other than Brad Pitt starred, this review would read much harsher. But Pitt brings his considerable charm and presence to a nothing role as a hired criminal on Japan’s high-speed Shinkansen. He travels from Tokyo to Kyoto along with a passenger list of (primarily non-Japanese, conspicuously so) professional killers played by Brian Tyree Henry, Aaron Taylor-Johnson, Joey King, and plenty more familiar faces and surprise cameos. Given the pulpy concept and wacky execution by director David Leitch (Atomic Blonde, 2017), it’s surprising that screenwriter Zak Olkewicz adapted Bullet Train from a novel—Kotaro Isaka’s Maria Beetle from 2010. The result feels more like Guy Ritchie applied his aesthetic to a manga. At 126 minutes, the movie is overlong and drags in the final stretch, but there’s enough mindless action and playful energy here for Pitt’s admirers to enjoy. Just don’t expect this zippy yarn crammed with ironic humor to deliver anything remotely original or be memorable beyond its duration.

The setup recalls Smokin’ Aces (2006), Hotel Artemis (2018), Gunpowder Milkshake (2021), or the John Wick series—movies that take place in a secret underworld of ruthless wetworkers and mythic crime bosses. Walk down the street, and every third person is a hired assassin. Bullet Train introduces each character with onscreen titles, flashing their name in glowing neon English letters and Japanese characters. They have handles like The Wolf and The Hornet, and each thinly drawn killer comes with an elaborate backstory told in a flashback or random cutaway. Most of them are riding the bullet train because a ruthless and mysterious Russian crimelord, The White Devil (whose reveal is worth the wait), who murderously took over the Yakuza years earlier, arranged for them to be there. Still, Bullet Train spends about half its runtime off the train, expounding on the chequered pasts of its various criminal passengers—dispersed amid as many distinct cars as featured in Snowpiercer (2013).

Pitt plays a hitman, codenamed Ladybug, who accepts his first job after a long hiatus and some much-needed counseling. Behind thick-rimmed glasses and a bucket hat, he has a well-meaning and open face—an odd quality for a trained killer. He’s also kind of a dope, combining his combat skills from Mr. and Mrs. Smith (2005) with his hapless energy in The Mexican (2001). He refers to everyone as “dude” and “bro,” and his “biblical” bad luck results in plenty of blunders, making us wonder how he’s survived this long. In his newfound peaceful state of mind, which has him talking in therapy clichés such as “hurt people hurt people” and “let this be a lesson about the toxicity of anger,” he wants to avoid violence. So it’s all the funnier when he accidentally kills the opposition or tries to zen his enemies out of conflict. His mission, passed down by his handler (voiced by Sandra Bullock), requires him to board the bullet train, obtain a briefcase loaded with money, and step off at the next stop. But, of course, it doesn’t work out so smoothly, as several other hired killers have competing or concurrent missions. 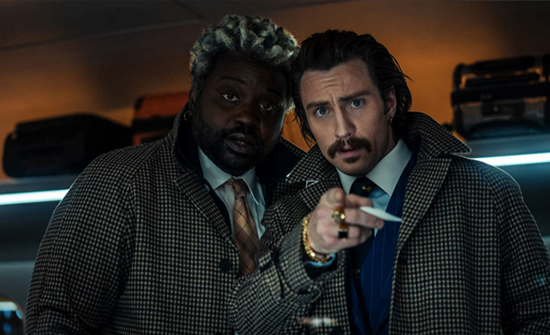 Stealing the show are a pair of British brothers named Lemon (Taylor-Johnson) and Tangerine (Henry), who bicker like children and take pride in their wood chipper body disposal skills. In his pinstriped suit and gold chain, Lemon comes from the same old-school gangster academy as Michael Caine in Get Carter (1971), albeit spliced with Jason Statham’s hard-boiled demeanor. Tangerine relies on his quirky love of Thomas the Tank Engine as a method of judging character. Although they’re ruthless and intense, the brothers have an endearing bond that grows throughout and represents the only emotional tingle in the movie. Elsewhere, Bullet Train features a manipulative and young female assassin called The Prince (King) who pretends to be a schoolgirl, though her backpack contains a handgun and bomb-making materials. Andrew Koji plays one of the few Japanese characters dubbed The Father, and he’s determined to avenge an attack on his young son. The great Hiroyuki Sanada also makes an appearance as The Father’s father. Several other big names appear minor roles, but they’re worth discovering for yourself.

Leitch directs with the same cartoonish glee he delivered in Deadpool 2 (2018) and the same over-the-top action from his Fast and Furious spinoff, Hobbs & Shaw (2019). A former stunt coordinator, Leitch knows how to make the hand-to-hand combat intense, but the fighting and gore often have a CGI quality that makes everything appear artificial and weightless. Maybe it’s because everything outside the train’s windows has a computer-animated sheen. Inside, cinematographer Jonathan Sela washes the slick and futuristic train in cool-looking accent lights. Regardless, the movie spends so much time cutting away to random asides that Sela and editor Elisabet Ronaldsdottir struggle to clarify the train’s front-to-back layout, which is unclear and surprisingly less claustrophobic than you might imagine. Still, some memorable set pieces take place on a library-quiet car or the Momonga kitten car for children (based on the real-life Hello Kitty car), and there are some amusing interactions between Pitt and a smart toilet. The smaller scenes prove most engaging, whereas the third act drags once the train starts speeding out of control in a special effects blur.

Although there’s not much to the story and the action is primarily standard Hollywood choreography, Bullet Train entertains with its bold colors, outlandish tone, and attractive stars. The movie’s talent is having fun playing broad caricatures engaged in ultra-violent mayhem—including dismemberments, exploding heads, gunshot wounds, and bloody vomit (indeed, it’s not for the squeamish). Plus, Leitch drops another notable cameo every few scenes to lend the proceedings an anything-can-happen quality. Alas, when the movie tries to conjure a message about good luck, bad luck, and accepting what fate has in store, it’s a tacked-on idea that doesn’t resonate. And when Leitch unnecessarily replays earlier scenes to clarify plot details or character motivations for the overwhelmed viewer, it suggests the filmmakers think their movie is more complex than it really is. Fortunately, Bullet Train is just diverting enough to keep your attention, mainly thanks to the joys of watching a goofy Pitt and his antic company.