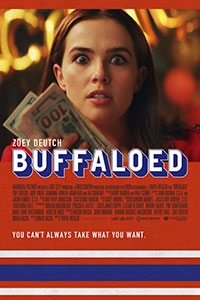 Buffaloed is the offspring of a threesome between The Wolf of Wall Street (2013), The Big Short (2015), and I, Tonya (2017). Like those films, this comedy hangs much of its appeal on the charismatic criminal at its center, here played by Zoey Deutch. Her character supplies expository voiceover and talks directly to the camera in flashy sequences that hope to lay bare a seedy underworld. Far down the ladder from Wall Street, the 2008 financial crisis, or even the cutthroat world of competitive skating, director Tanya Wexler’s film targets debt buyers. It’s an industry that already has negative connotations, and Buffaloed exaggerates the stereotypes with ample amounts of misguided information. Setting aside that its no exposé, the approach, aping better films, still works for the most part—largely because everyone seems committed to a rather effective copy of a proven formula.

Captained by Deutch’s mad-eyed, blustering role as Peg Dahl, the offbeat indie follows an ambitious young woman who looks for an angle to break into the Ivy League college scene. Instead of studying hard and applying for scholarships, though, she resorts to a series of illegal scams to raise her tuition. She starts by selling cigarettes in her high school parking lot, and then advances to forging scalped football tickets—a crime that lands her in prison. Upon her release, she receives a call from an aggressive debt collector (Brian Sacca, also the screenwriter), calling about a past-due account owed by her mother (Judy Greer). All at once, Peg realizes her financial troubles could be solved by collecting debts and soon lands a job at a local boiler room operated by Wizz (Jai Courtney). Her strategy of ”selling relief” makes her a top performer, but the shady and misconduct-laden work environment inspires Peg to branch off on her own in direct competition with Wizz.

The film takes place in Buffalo, New York—hence the verbing of the title—a city with a penchant for spicy wings and football. Everyone in town has Midwestern accents reminiscent of Wisconsinites, and there’s an undeniable accent discrimination at work here that robs its characters of integrity. Indeed, Buffaloed seems to laugh at the regional idiosyncrasies and stereotypical lower-class behavior on display, such as how the characters say “pop” instead of soda or hold a good casserole in high esteem. Similar to how I, Tonya tried to laugh at Tonya Harding even as the film censured its audience for laughing, Wexler’s film tries to grant dignity to these characters even as it mocks them. Peg, always a cut above the rest, avoids most of these stereotypes, but the supporting characters look like a roster of weirdos, ever the butt of the joke. Fortunately, Wizz and his company of ruthless, sleazy collectors are far worse.

For a film that targets the debt collection industry, Buffaloed gets a lot wrong. It describes collections as an “unregulated clusterfuck” and claims there are “barely any laws regulating debt collection”—that collectors can garnish wages and harass your family members about your bills. This was true twenty or thirty years ago, but not today. The U.S. collection industry is regulated by several federal laws and regulatory agencies, including the Fair Debt Collection Practices Act and the Consumer Financial Protection Bureau, and lawyers are quick to sue for any violation of state or federal laws. Moreover, Buffaloed lumps all debt collection companies into one abysmal whole. But third-party companies that collect on behalf of a hospital or bank generally take a kindly customer service approach, as they’re expected to maintain the creditor’s relationship with the customer beyond the recovery of the debt. Conversely, debt buyers, the shadier breed of debt collector depicted in this film, purchase the debt from the original creditor, and so they have no need to play nice. Buffaloed doesn’t bother making a distinction.

Then again, Buffaloed seems less outraged about its topic than The Big Short, and also less instructive (the postscript factoids about the average American’s debt aren’t all that surprising in our era of high deductible health plans). The film is more interested in poking fun at the blue-collar Buffalo culture, which is just a shade less redneck than Tonya Harding’s family. Whatever the flaws and derivations of its screenplay, Wexler delivers a fast-paced and playful 90 minutes, placing the weight of the material on Deutch’s shoulders. She’s best known for her appearances in Everybody Wants Some!! (2016), The Disaster Artist (2017), and a hilarious turn in last year’s Zombieland: Double Tap, and she’s deliriously entertaining here. Even if the story feels like a cheap knockoff, and an inaccurate one at that, Buffaloed offers a dazzling performance to admire.