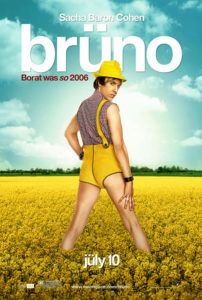 Funny how Brüno, the latest cinematic incarnation inspired by a character from Sacha Baron Cohen’s Da Ali G Show, proves to be daring, topical, and so revealing about American society, while also being so crude, outrageous, and shocking. What’s strange is that you don’t even realize this until leaving the theater, because, throughout the short runtime, you’re too busy laughing, even crying from the unrelenting procession of satirical, cutting edge humor.

Cohen dons a wispy, highlighted mane, an always tight and glittery ensemble, and a hearty application of cover-up for his role as the titular gay personality. Dejected from his Austrian television show, the extremely flamboyant Brüno comes to America with his assistant’s assistant Lutz (Gustaf Hammarsten) to become a world-renowned star. Desperate for fandom, he tries everything from acting to charity to suppressing his gayness to become a worldwide celebrity. Some of the footage has clearly been staged; some is ingenious improvisation beyond compare.

In one sequence, he interviews real, obsessed parents trying to make their babies into stars. Brüno asks these freakish pageant moms (and dads) if they’d be willing to expose their offspring to antiquated machinery, amateur chemistry, and liposuction. They would. What about posing their babies as Nazis or depicting them crucified? Yup, no problem. With any luck, following the movie’s opening, we’ll hear about how Social Services recovered these children from their horrible parents.

Somehow director Larry Charles captures the most uncomfortable situations imaginable and manages to get his star out alive. Just as he did in Borat and Religulous, Charles shoots interviewees diametrically opposed to the movie’s ostensible host. In fact, we begin to believe that Cohen must have a death wish. When he tells an Al Aqsa Martyr Brigade member that Osama Bin Laden needs a makeover, you have to question how the actor ever expected to come out of that meeting alive. These moments cause you to writhe in your seat in fear and awe of Cohen’s unbelievably ballsy intentions, how he fearlessly puts himself at risk and yet never breaks character.

Though it’s doubtful he’ll be able to go undercover ever again in any densely populated city, he’ll always have plenty of material in the Deep South, where “queers” and “foreigners” either get raised eyebrows, hearty boos, or chased out of town. Most of the movie’s second half takes place there. It might be unfair for Cohen to keep making a target of the South, but the production’s unrehearsed footage reveals some scary truths and speaks for itself. Consider when Brüno takes a hunting excursion with three camouflaged southerners lacking any sympathy for homosexuals—when their guest shows up naked at one of their tent doors at 3 a.m., confessing a bear ate his clothes, the setup ceases to be funny and becomes downright dangerous. While the prejudices within are hilariously appalling when exposed, it’s also heartbreaking that such intolerance exists, and yet Cohen keeps finding them below the Bible Belt.

The only risk involved for Cohen, besides physical harm, remains potentially feeding the very wrong stereotypes that his movie seeks to expose and therein mock. Brüno is so incredibly flaming, to the point of moving beyond exaggeration and into colorful caricature, that it might go over the heads of close-minded moviegoers. But just like Borat, some will appreciate Cohen’s irony-atop-of-irony, and some will scoff at the comedian’s boundless determination—the lengths he goes for a laugh, which, unmistakably, have no limit at all.

No matter the number of laughs on the first viewing, the movie’s reliance on shock value will lessen on subsequent viewings. Without question, Brüno will not be as successful in the American market as Borat was in 2006. An unfortunate prediction on my part. More than half the audience from our country—those who would restrict gay marriage at every turn and far too often fall back on age-old religious edicts to guide political decision-making—will avoid the movie simply because they’re anti-gay. Then again, it takes a particular kind of viewer to find a singing penis funny.