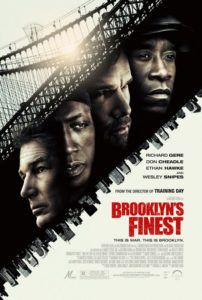 If the characters in Brooklyn’s Finest were half as interesting as the turbulent neighborhood they inhabit, then director Antoine Fuqua’s cop drama might’ve been worth the more-than-two-hour investment. As is, Fuqua and his screenwriter Michael C. Martin employ every cop movie formula in the book, as though the filmmakers had a police movie marathon prior to filming and decided to pilfer scenes from various classic cop yarns. Fuqua examines three loosely associated Brooklyn cops, each with a different position within the force, who each engage in cliché conflicts that we’ve seen played out in better films. The three cop characters have no discernable connectivity to one another, and when it’s over, we’re left scratching our heads, wondering if we missed how they were supposed to relate, if at all.

Fuqua’s Training Day star Ethan Hawke plays Sal, one of the three cops followed in the film. Sal is your standard underpaid policeman; he’s unfortunately also your standard Catholic. That’s unfortunate because, with respect to his religion, Sal doesn’t believe in contraception (and he apparently hasn’t heard of church-sanctioned coitus interruptus). He has two sons and two daughters with his wife, Angela (Lilly Taylor), who is now pregnant with twins. And on Sal’s pithy wages, he can’t afford to provide for his family the way he would like. What’s more, his house is riddled with mold and it’s making Angela sick. Hawke overacts in scenes where his character breaks down to a priest in a confessional, desperately asking for help; and the actor can’t quite pull off the unhinged tough-guy act when Sal cracks and decides to steal drug money for a down payment on his dream house, which he cannot afford. One wonders why Sal doesn’t just get the mold problem fixed and move on.

Also under pressure is Tango (Don Cheadle), an undercover cop with that ever-present conundrum which seems to haunt every undercover cop in movies: Tango had gone too deep undercover and, when asked by his superiors to betray and arrest his drug lord friend Caz (Wesley Snipes), he questions his loyalties to a police force that has forgotten him. His police handler (Will Patton) attempts to sweeten the deal by offering him a detective’s badge via an unsympathetic FBI agent (Ellen Barkin) who wants Caz off the streets. But when it comes time to make an arrest, Tango isn’t sure which side he’s playing for. Cheadle gives the best performance in the film, but it’s in a role that goes from morally perplexed cop to vigilante warrior all too quickly.

The third story involves Eddie (Richard Gere), a veteran cop one week away from retirement. His entire career consists of keeping his head down so he can go home to a now-broken marriage, which was probably ruined because of his extracurricular activities. In his spare time, Eddie enjoys drinking booze for breakfast, holding a loaded gun in his mouth, and visiting a prostitute (Shannon Kane) with whom he wishes he was more than just a customer. While training new recruits, Eddie is accused by a young idealist fresh out of the academy of playing it safe and having no backbone. After that, Eddie questions himself and decides to change his ways at the last possible moment.

None of these characters are particularly likable; one or two are downright contemptible. And that we’ve seen identical story and character types in the cannon of great cop movies before doesn’t help the film’s cause. What’s worse, though all three characters work in the same neighborhood, the connectivity between them is nil. Fuqua pointlessly reminds us that they’re all in the same proximity by having them literally bump into one another on the street, or pass each other by in the precinct. But their associations end with such random momentary encounters, the purpose of which remains elusive. Perhaps if the characters all played some unknown crucial role in each other’s lives, then the film might have more meaning, akin to 2005’s Crash (or any other character mosaic movie for that matter). But without the stories sharing some common ground beyond the superficial backdrop of cops on the rough Brooklyn streets, the film feels hollow.

Because of this lacking connectivity, Brooklyn’s Finest drags at a snail’s pace toward outcomes that are predictable from the moment we’re introduced to the characters. Fuqua is a talented director but always seems to attach himself to material that leaves the viewer feeling empty and uninvolved (see King Arthur, Tears of the Sun, et al.). His productions typically have a well-crafted look; here he ornaments his film with a city street atmosphere that feels real and dangerous. However detailed his aesthetic flourishes may be, they don’t make up for the substandard storytelling. Not even the impressive cast can compensate for the film’s broken narratives that meander about and never find a way of relating to their audience. As a result, what would usually have been just a mediocre film proves careless and frustrating.