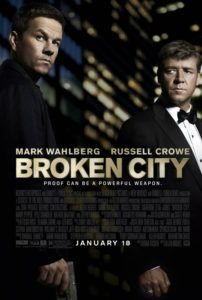 Though most of it was filmed in New Orleans, Broken City is a yarn about crime and political corruption in New York City. Directed by Allen Hughes—one-half of the Hughes Brothers team (minus Albert) that made Menace II Society (1993) and The Book of Eli (2010)—it features an impressive cast headlined by Mark Wahlberg, Russell Crowe, and Catherine Zeta-Jones. Everything about this movie sounds promising thus far, right? But then you must consider how 20th Century Fox released it in the January lull, historically a creative void where studios dump their garbage so as not to compete with the outbreak of potential Oscar winners dominating multiplexes. Wahlberg co-produced what thirty years ago might’ve made an engaging crime story in someone like Sidney Lumet’s hands, but today this material feels stale, overly sensational, and at times downright preposterous.

The story opens with a prologue wherein Det. Billy Taggart (Wahlberg) faces a possible trial for murdering a rapist, supposedly in self-defense. Just after being absolved, Taggart meets with NYC’s Mayor Hostetler (Crowe), who, regardless of believing Taggart is a hero, asks him to step down to avoid further investigations. Without much of an argument, Taggart agrees, which should give you some inclination of his guilt. Anyway, seven years pass, and Taggart has become a Private Investigator; he’s since cleaned himself up, stopped drinking and using drugs, and maintained a lifeless relationship with his indie movie actress girlfriend, Natalie (Natalie Martinez). One day, he finds his money problems are solved when Mayor Hostetler offers him $50,000 to spy on Mrs. Hostetler (Zeta-Jones), whom he suspects is having an affair with the campaign manager (Kyle Chandler) of his opponent in the upcoming election, Jack Valliant (Barry Pepper). Of course, it’s not just about the crooked Mayor spying on his wife; there’s also a shady property deal in which the Mayor is involved. When the campaign manager ends up dead, Taggart realizes he’s been used.

Through a series of predictable developments and uninvolving theatrics, characters behave in illogical ways, and eventually, we’re watching less for the story and more as spectators to the filmic equivalent of a train wreck. Take Commissioner Fairbanks (Jeffrey Wright), who accuses Taggart of being an accomplice to the campaign manager’s murder one minute, and then trusts Taggart as a shakedown strong-arm the next. Then there’s the far-fetched Mayor, whose shady behavior is so obvious that it’s impossible to imagine modern-day New Yorkers electing him. But Taggart’s inconsistencies are the most distracting, especially when he begins to fall off the wagon and things go sour with his girlfriend mid-film. There’s obviously some chemistry between Taggart and his assistant (Alona Tal), except nothing comes of it. He’s unlikeable, macho, and homophobic throughout the film’s first half. Then, in the second half, just after he learns some crucial information that could mean his advantage over the Mayor, Taggart stops to take a long bath. It’s a weird break in the movie’s momentum. Indeed, nothing much makes sense in Broken City in terms of character motivation, or even cinematic realism.

Wahlberg plays the kind of character he’s incapable of enhancing outside of a supporting role—a tough guy. In The Departed, he earned an Oscar nomination for acting hilariously one-note and abrasive in a few, brief scenes surrounded by three-dimensional characters. But put him in a badass leading man role, especially one without a sense of humor (see him in Contraband or Max Payne), and you get the dullest interpretation of that role. It becomes achingly obvious that Wahlberg is trying to be cool, and it just doesn’t work. Then again, put him in a movie where his masculinity becomes a self-debasing inside joke (see Boogie Nights, I Heart Huckabee’s, or Ted), and he’s outstanding. Here, Wahlberg’s auto-pilot performance is difficult to endure and becomes unintentionally funny, especially when he starts acting like a wreckless drunk, badly. Fortunately, the supporting cast is more interesting. Crowe, orange-tanned and chubby, is having fun hamming it up as a cartoonishly evil politician, whereas Zeta-Jones remains an underrated screen presence. Pepper and Chandler are standouts as the Mayor’s opposition.

After a while, you give up on this one, and all you can do is slump in your seat and wait for it to be over. There are two major factors that probably made Broken City so intolerably bad: 1) the screenplay by Brian Tucker is really just this awful, the plot at once too complicated yet too simple, and 2) editor Cindy Mollo performed a monumental hack-and-slash job to meet “acceptable” runtime constraints. Perhaps this isn’t fair, because the resulting film is such a mess that everyone involved is culpable for its downfalls. Except, most immediate is how fragmented and pieced together the story feels, hence singling out the writer and editor. Still, looking closer, you begin to realize nothing about this movie feels right. Maybe, just maybe, Hughes intended to make a sprawling three-hour crime epic with intricate subplots and well-developed side characters. But in this less-than-two-hours format, such components feel undersized or peripheral to the degree of becoming nonsensicalities. Not much of anything works in Broken City, making the title more than apt.