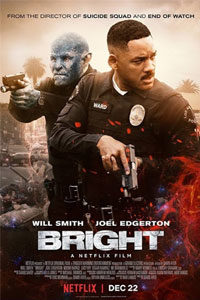 Bright marks the first blockbuster-sized effort produced by Netflix. Rather than acquiring the film through their usual bidding process, Netflix made the film for $90 million and released it exclusively on their streaming platform (except for a single theater in New York and another in Los Angeles). Not only is this tentpole-sized effort the most expensive Netflix original to date, it also boasts an impressive cast and all the frills of a Hollywood production. Behind the camera, director David Ayer reteams with his Suicide Squad (2016) leading man Will Smith for a genre mashup scripted by pop-culture guru Max Landis (Chronicle, Victor Frankenstein) synthesizing fantasy elements inside a gritty buddy cop scenario. Although Bright would undoubtedly play better on the immersive big screen, the limitations of a small screen presentation cannot be blamed for its overused tropes, familiar structure, and altogether lousy writing—to be sure, the film can only be described by comparing it to other, better material: a Tolkien-esque mythology ungainly married to Ayer’s string of L.A. cop movies.

In the film’s alternative, modern-day version of L.A., Orcs and Elves have lived among humans for centuries, separated only by their classes. At the top, Elves, with their shimmering hair and pale eyes, are an elitist class that divides their time between “running the world and shopping.” Humans sit comfortably in the middle, whereas Orcs, who have blue skin marked by an apparent melanin disorder, occupy an inferior social class associated with low IQs, lumbering physicality, criminal behavior, and heavy metal music. Orc prophecies, which foretell of a “Dark Lord” who will return, appear in the graffiti-sprayed ganglands of L.A., implying a complicated backstory, some of which is detailed in the film’s two-hour runtime. (Surely Netflix is planning sequels.) But actual magic proves rare in this blended world of fantasy and reality. In fact, federal agents (Edgar Ramírez, Happy Anderson) seek out magic-enabled individuals known as “Brights” for fear that they obtain a rare magic wand and could cause no end of destruction.

Viewers familiar with Alien Nation (1988) will recognize the basic setup, which itself was a genre-inflected take on the racially clashing buddy cops from 48 Hrs. (1982) and Leathal Weapon (1987): Weary street cop Daryl Ward (Will Smith) has a new partner, Nick Jakoby (Joel Edgerton), the first Orc ever to become a police officer. Ward isn’t sure where Jakoby’s loyalties lie, with his Orc heritage or his badge. Even though Jakoby is an outsider among his own kind, not to mention idealistic and honest to a fault, the otherwise exclusively human LAPD doesn’t trust Orcs and would prefer to have him ejected from the force. Ward’s superiors want him to find any plausible reason to have Jakoby fired, but the threat of bad publicity looms. An obvious parallel to race relations and civil rights issues pervades the material, although it’s not treated as a serious commentary. In one sequence, Ward lectures his daughter against prejudicial remarks, but the very next moment he announces “Fairy lives don’t matter” when he smashes one of the winged, zippy pests to death. 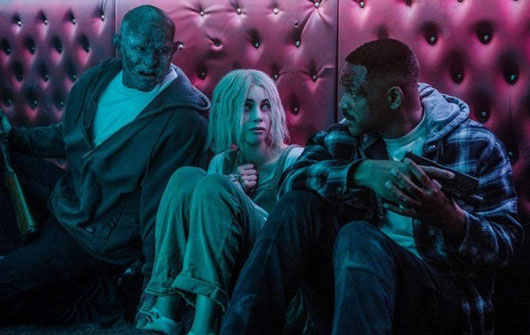 The plot kicks into gear when Ward and Jakoby discover a frightened elf, Tikka (Lucy Fry), with a dreaded magic wand, which is basically “a nuclear weapon that grants wishes.” An elvish group called Inferni, headed by Leilah (Noomi Rapace), hopes to resurrect the Dark Lord and needs the wand to do so. Elsewhere, several assorted factions—including dirty LAPD cops, latino gangsters, an Orc crew, and the aforementioned feds—want the wand for their own reasons. Ward and Jakoby spend much of the film in a series of bloody shootouts, chased through L.A. strip clubs and heavy metal venues, dragging along the virtually silent non-entity Tikka. While dodging one group only to find themselves in the clutches of another, our mismatched heroes learn to trust each other along the way. Not that the audience will care. Smith’s character is disagreeable and unpleasant, while the dull Jakoby character never allows Edgerton’s performance to penetrate the Orc makeup.

Bright is less interested in telling a story than world-building to establish a franchise. When Landis’ characters aren’t yelling “shut up” at one another, they’re constantly expounding the film’s detailed mythology. Even though everyone in the film lives in this world and should understand its rules, they spend much of the film explaining everything for the audience’s sake. Bright never really stops inventing new wrinkles and magic rules, much to the exasperation of the viewer. The exposition continues in the background as well, hoping to evoke a sense of wonder with the random appearance of a dragon flying in the night sky. But Bright‘s tricks remain obvious. For instance, humans will explode if they attempt to hold a magic wand, except for an ultra-rare human-Bright. (Guess who that might be.) And doom-laden references to the never-seen “Dark Lord” cannot help but recall Voldemort, and fail to pique our interest.

In Training Day (2001), Street Kings (2008), End of Watch (2012), and another half-dozen other films about corrupt L.A. cops, Ayer’s frantic, macho energy has proved more stimulating. His brand of cinema works on a visceral level, propelling his characters into a danger zone of gangs, guns, and street crime. Combining his usual material with fantasy elements doesn’t add much to the template, aside from some ambitious CGI action sequences and mythology worthy of Dungeons & Dragons. Bright is certainly an attractive prospect given the talent involved, but Ayer’s aggressive and ultramasculine perspective feels tired and, perhaps, outdated—for Smith, the performance seems like a callback to his poorly aged Bad Boys films. As for Netflix, they’ve had a banner year with smaller, more artful titles picked up on the studio circuit: Dee Rees’ race drama Mudbound, Noah Baumbach’s family dramedy The Meyerowitz Stories (New and Selected), and the best of them, Bong Joon-ho’s Okja. They should stick with showcasing films that might not otherwise get the audiences they deserve, and leave the Hollywood blockbusters to the major studios.