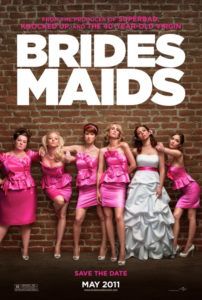 Aligning perfectly with Judd Apatow’s other heartfelt, raunchy comedies like The 40-Year-Old Virgin and Funny People, the vanguard producer’s latest comes from writers Kristen Wiig and Annie Mumolo, and brings the feminine perspective into Apatow’s usually male-dominated territory. At first glace, it appears to be your usual romantic comedy about female friends planning a wedding. Fortunately, as familiar as Bridesmaids may seem in terms of plot—how many “chick flicks” have there been about weddings?—it’s enriched by the writers’ exploration of three-dimensional characters, who just happen to be women. The movie doesn’t treat its female characters as exceptions to the absurd comedic rule that women aren’t funny, but for moviegoers devoted to that archaic idea, it will certainly prove them wrong.

Here the current SNL regular Wiig advances beyond the title’s implication and graduates from television regular to movie star, her performance so assured and likable that it’s bound to secure her another feature film lead role in the near future. Wiig plays Annie, who’s asked by Lillian (Maya Rudolph) to be her maid of honor. Friends since childhood, the two have gone in different directions. Lillian’s well-to-do fiancé (a silent Tim Heidecker) and newfound moneyed friends are much different that Annie’s down-to-earth, minimum wage style. Approaching rock bottom, Annie’s bakery business has gone under, she lives with weirdo bother-sister roommates, works a lousy job, her car barely runs, and she degrades herself as the regular booty call for a man who refuses to commit (Jon Hamm). In the face of all this, Annie feels upstaged by Lillian’s new friend and bridesmaid Helen (Rose Byrne, excellent as usual), an elitist with deep pockets and no end of sophistication.

Wiig, an expert at passive-aggressive humor, places Annie in a backhanded battle with Helen over who can conceive the best ideas for Lillian’s wedding. Of course, Helen’s outwardly graceful and modish touch trumps Annie, who chooses the wrong restaurant (leading to a gross-out food poisoning sequence) and singlehandedly screws up the bachelorette party. With Annie’s personal life in shambles, no wonder Lillian makes the switch halfway through the proceedings to have Helen take charge as the maid of honor. Meanwhile, Annie flirts with a nice-guy state trooper (Chris O’Dowd), whose sweetness is overlooked by the self-pitying protagonist. The other bridesmaids—Ellie Kemper and Reno: 911!’s Wendi McLendon-Covey take a back seat to Gilmore Girls’ standout Melissa McCarthy—are mostly oddballs, with the exception of McCarthy, who brings some emotional motivations to her eccentric character.

Recalling the struggle of Jason Segel’s character in Forgetting Sarah Marshall, Wiig’s character must find a way out of her rut, whereas her downward spiral consumes most of the film and becomes increasingly funny and affecting as Annie’s behavior worsens. Yet, despite the lows reached, Wiig remains strangely sympathetic, even in her worst moments. We may cringe at her poor behavior, but the actress never loses the audience’s compassion, no matter how bad she screws up. A memorable supporting actress in Extract and Paul, Wiig displays impressive balance between broad laughs and relatable emotions, her natural rapport with costar Rudolph setting tangible stakes in the conflict. Given the almost guaranteed commercial success of this film, chances are Wiig will move on from her sketch comedy roots and become better known as a movie star comedian. Here’s hoping.

Paul Feig, a television director most commonly associated with Arrested Development and The Office, delivers an unassuming production that allows its female stars to take center stage. Wiig may be the central component, but Byrne, Rudolph, and McCarthy also give scene-stealing performances to round-out the whole. And whereas typical wedding movies contain and impel all those ridiculous clichés about the sexes, Bridesmaids manages to be so refreshing by appealing to more than just a female audience. Even while it harbors formulaic turns, the approach will appeal to fratboys and rom-com crowds alike, while it maintains a touching concentration on friendship and never dives too far into the bawdy deep end.