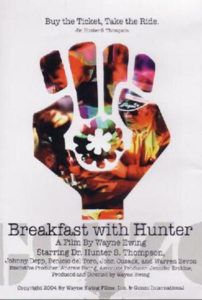 Wayne Ewing’s unfocused but fascinating documentary Breakfast with Hunter paints an affectionate portrait of the most radical writer in America’s history, the late Dr. Hunter S. Thomson. For devotees only, the doc offers intimate, if grainy footage of Thompson with friends and followers, giving an impression of the man himself versus an overview of his drug-infused antics and exploits over the years. What one takes away from the meandering footage of Thompson, is that despite appearances (always donning his signature cigarette holder, a variety of cranial gear, shorts, etc.) and notorious behavior, this is a man whose work should be celebrated. Disciples of Thompson’s writings or his brand of antics have much to savor here, whereas everyone else may have trouble relating to Ewing’s roving admiration.

Released in 2003, Ewing’s doc follows Thomson between 1996 and 1998, a time of career reflection for the founder of gonzo journalism. Celebrations ensue over the twenty-fifth anniversary of his landmark novel Fear and Loathing in Las Vegas, including appreciations from friends and colleagues, as well as followers like John Cusack and Johnny Depp. Footage from notable writers and key figures in Thompson’s life (everyone from George McGovern to Rolling Stone editor Jann Wenner) emerge to offer a kind word. Meanwhile, the book’s adaptation to film stumbles along without a solid script, though actors Depp and Benicio Del Toro are attached to star. And then Thompson finds himself arrested and fighting a bogus DUI charge from the Aspen police.

Ewing captures priceless arguments between Thompson and friends, his camera receding into invisibility as debates proceed beyond the realm where normal documentary subjects would ask, Can you shut the camera off? And perhaps such moments occurred throughout filming, but they’re not shown here. Ewing doesn’t want his audience aware of his production’s artifice; he wants us to experience personal moments with Thompson—as much as one can have a personal moment with Thompson, which, as it turns out, isn’t much at all. It becomes achingly evident that Thompson never tires of his own exhausting, acerbic ways, that his act isn’t merely an act but a lifestyle that never ceases. He simply is…

Consider the argument between Thompson and artist Ralph Steadman, where Steadman claims readers would have never bought Fear and Loathing in Las Vegas initially if it weren’t for his illustrations. The whole quarrel seems in jest on Steadman’s part, successfully producing a rise out of Thomson. Alex Cox and his co-screenwriter, however, were dead-serious when they arrived at Thompson’s Colorado “fortified compound” (dubbed Owl Farm) to propose that a scene from their never-to-be filmic adaptation of Fear and Loathing in Las Vegas feature Thompson’s character on a cartoon wave. Opposed to their animated approach to his writerly metaphor, Thompson won’t allow his book to be turned into some “Mickey Mouse” landscape based on Steadman’s art. A phone call later and Cox is fired from the project, making way for the frantic yet spiritually precise adaptation by Terry Gilliam (Brazil).

However, Ewing never ceases to portray Thompson with anything but esteem, a man surrounded by admirers and friends that support and keep him running. It’s as though those close to him have gathered to acknowledge that Thompson represents the last example of the true American rebel of the 1960s. His declaration that “the American Dream is really fucked” was never truer than it is now, as his death by suicide in 2005 parallels the country’s slow burn to self-destruction from a fuse that was lit decades ago. Realizing this makes Ewing’s highly personal behind-closed-doors production all the more meaningful to Thompson’s supporters.

For audiences unfamiliar with Hunter S. Thompson, his writings, his surreal mindset, Breakfast with Hunter should be prefaced by some historical overview. Start with the book Gonzo: The Life of Hunter S. Thompson written by Corey Seymour, Jann Wenner, and Johnny Depp. Follow that by readings of Hell’s Angels and Fear and Loathing in Las Vegas, then a viewing or two of Gilliam’s film (the other major Thompson adaptation, Where the Buffalo Roam from 1980, is best forgotten altogether). And after delving into Thompson’s work and past, make sure you’ve been entranced by his counter-culture allure. Only then will Ewing’s documentary come as a welcome love letter to one of America’s most important writers.

(NOTE: Wayne Ewing’s Breakfast with Hunter is not available in stores, but fans of either Ewing or Thompson are strongly encouraged to seek out this DVD on www.hunterthompsonfilms.com.)