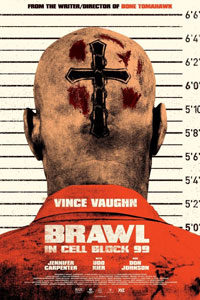 Brawl in Cell Block 99 opens with a marvelous sequence that describes its fearsome protagonist with sharp, precise observation. His head shaved and tattooed, an outstanding Vince Vaughn plays Bradley Thomas, a towering figure with a chequered past, far removed from the actor’s usual motor-mouthed antics. After getting laid off from his job as a mechanic, Bradley returns home early to learn that his wife, Lauren (Jennifer Carpenter), has been sleeping with another man. He orders her inside, and rather than administer the ugly spousal beating we might suspect, Bradley proceeds to tear apart Lauren’s car with his bare hands, smashing in windows and headlights with his fists, punching the rearview mirror, and tearing off the hood. A moment later, he is calm. He goes inside and proceeds to have a civil and sensitive conversation with his wife, asking how he contributed to her straying, and then he determines to fix their marriage, and even promises a better future with a child. The scene is as much about Bradley’s apparent love for his wife as his self-control, deliberate behavior, and frightening capacity for violence.

Moving at the measured pace of an arthouse film, the second feature by S. Craig Zahler suggests the sophomore director’s emergent style, following his incredible freshman effort in 2015 with Bone Tomahawk. Although capable of gory violence both shocking and disgusting, Zahler’s two films thus far unfold at a leisurely tempo, pushing forward with certainty and purpose, yet in no particular hurry. Both his debut and Brawl in Cell Block 99 run just under two hours and fifteen minutes, and both proceed toward a destination fixed early on, allowing the viewer to sit back and delight in the expert application of controlled form in a grindhouse scenario. To be sure, Zahler’s prison fight film affects a 1970s undercurrent of Tarantino-esque inspiration, beginning with the soundtrack with new songs by original soul and R&B legends Butch Tavares, The O’Jays, and Adi Armour.

Zahler draws influence from Tarantino’s same wellspring of ’70s exploitation cinema—those C-grade titles of transgressive themes, sleazy sex, and over-the-top bloody violence—and similarly, applies the discerning eye of a thoughtful filmmaker in his homage. What separates Zahler from the playfulness of other post-modern filmmakers like Tarantino is the seriousness with which he approaches his subject. His characters speak with callous stoicism, even in their more genre-inflected moments, delivering spare and colorful dialogue. When a crime boss offers his goons double-pay if they kill Bradley, the character replies, “Have him kick in for your funeral.” Zahler also owes a debt to the much more expansive tradition of hard-boiled prison films with his title, which nods to Don Siegel’s Riot in Cell Block 11 (1954). 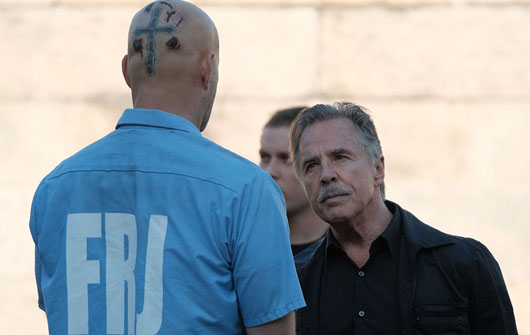 But the audience won’t see Bradley enter a prison for nearly an hour into the film, and the dreaded Cell Block 99 comes much later than that. After settling matters with Lauren, Bradley goes to work for his drug-dealing friend, Gil (Marc Blucas), delivering packages to various regular buyers. Lauren is several months pregnant, their marriage has improved, and they live in a comfortable new house. When Gil orders Bradley to carry out a pickup with a new band of Latino smugglers, the job goes bad, just as Bradley predicted, and he ends up with a seven-year sentence to a medium-security prison. Before he can settle into his prison routine, Bradley receives a visit from a creepy henchman (Udo Kier), who tells him that he now owes the smugglers millions for his part in botching the drug deal. They have kidnapped his wife and will do unspeakable things to the unborn child unless Bradley kills a fellow inmate—except, the target resides in another prison altogether, the maximum security Red Leaf, overseen by a cruel, cigarillo-smoking warden (Don Johnson).

Vaughn’s performance recalls his few early roles in Clay Pigeons (1998) or The Cell (2000), titles that required him to do more than talk fast and spout comic nonsense (his otherwise typecast onscreen persona since Swingers in 1996). Instead, Vaughn uses his stature to imbue the role with threatening gravitas, moving with meticulous intention and a sharp wit. Each of Bradley’s violent interactions with prison guards or other inmates serves his agenda, bringing him closer to his objective, which comes with a frighteningly brief deadline that requires immediate action (leading to a clever twist once Bradley arrives in the titular cell block). Much like the unforgettable finale of Bone Tomahawk, the violence in Brawl in Cell Block 99 is visceral and unrelenting (if occasionally rendered with cheap-looking makeup effects). Arms break like branches, heads cave-in like rotten fruit, and it all comes with a lowbrow quality that is nonetheless enhanced by Zahler’s poised, austere formal technique reminiscent of John Carpenter.

Benji Bakshi, cinematographer on Zahler’s previous (and next) film, uses medium shots that capture the action from a contemplative distance, while editor Greg D’Auria allows scenes to unfold in long, immersive takes. The approach is tactical, not unlike Bradley himself, and also steeps the viewer in every scene, each of them with a determined function in the narrative in an oddly highbrow way. Brawl in Cell Block 99 presents a number of such high-low contrasts: it blends arthouse mannerism with B-movie material; it offers Vaughn playing against type in a badass role; and it features a roomy length, marked by its almost reflective tone, but engrosses and remains exciting throughout. Zahler demonstrates his confidence—and consistency—as a new filmmaker, furnishing audiences with a gritty, primal film that contains artful sensibilities and substantive characters, but doesn’t skimp on the cheap thrills of revenge, prison fights, and a surprising number of crushed skulls.