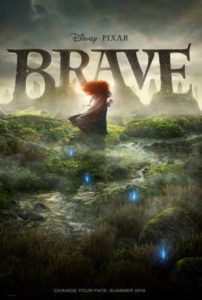 An enchanted story about a betrothed princess, a witch’s curse, and the changing of fate, Brave is a Disney-style storybook made by Pixar. Walt Disney built his legacy animating fairy tales into family-friendly spectacles, and in doing so he established a series of ‘happily ever after’ formulas ingrained into our understanding of the genre to this day. Pixar’s legacy, however, stands in the realm of visual and narrative perfectionism, where conventions are reworked or altogether originated. And so with this film, the Disney•Pixar corporate namesake has never been more appropriate. As much as Pixar’s film follows the conventional Disney storybook recipe, there are moments wherein the premier animation studio breaks convention; indeed, somewhere behind the scenes a Parisian rat has added a dash of smoked paprika and diced shallots to augment and ultimately deepen that standard Disney fairy tale recipe. What results is a familiar story told with impressive artistry and integrity, inside a deceptively simple treatment that hides its unconventionality behind its embrace of tradition.

Even the film’s main theme is about letting go of certain traditions to make room for all new ones. Set in the Scottish highlands long ago, the story follows Princess Merida (Kelly Macdonald) from her wee childhood as her mother, Queen Elinor (Emma Thompson), instructs her how to behave as a future queen should. But Merida, encouraged in part by her big lug father, the land’s great bear-slayer King Fergus (Billy Connolly), would prefer to go on adventures and become her own woman. When Merida reaches her age of consent, her parents announce her hand in marriage will be won by a prince from one of the three clans in their kingdom. Despite Merida’s fervent protests, Elinor refuses to budge and insists the ritual must commence out of tradition. Opposed to any such betrothal, Merida sets off on a row and comes upon a witch (Julie Walters) who will rearrange her fate with a spell. Merida was hoping to just change her mother’s mind, but the spell changes Elinor into a bear. Meanwhile, the clan leaders (Robbie Coltrane, Craig Ferguson, and Kevin McKidd) threaten war unless Merida follows through with their time-honoured custom.

This plot has elements of Aladdin, Beauty and the Beast, The Little Mermaid, and countless more. But determining that Brave is a Pixar film—and all that that entails—and not a Disney or Dreamworks production is simple: Consider how the film might have ended up in these other studios’ hands. Certainly the Scottish accents (here voiced by an excellent, almost all-UK cast) wouldn’t have been so thick, especially that of Merida. Remember in Dreamworks’ pseudo-Scottish How to Train Your Dragon how the protagonist suspiciously sounded like a modern teenager who used contemporary slang, while the movie’s adults used the easiest to understand Scottish accents? Macdonald’s accent is thick, but her enunciation is clear and sounds delightfully un-American. Moreover, Pixar’s film hilariously uses characters whose accents are so thick they intentionally can’t be understood. Imagine if Disney alone had produced the film; doubtful Merida would have been so independent. Think about Tangled, Disney’s “Rapunzel” story from 2010; even that sovereign female protagonist needed the help of a good strong man. Not so, here. Merida’s self-sufficiency requires no obligatory love interest to save the day.

Most importantly, the film contains a central relationship not between the princess and her prince; rather, Merida must reconnect with her mother, from whom she rebelled and in turn caused Elinor’s beastly predicament. To be sure, this story is about the bond between a daughter and her mother. So rare is a female protagonist in an animated film, but rarer still is a story about repairing a mother-daughter connection. After Elinor becomes a bear, her personality is still contained inside this furry, 7-foot-tall form; her awkward size offers physical comedy aplenty. But behind her animal appearance are tender, expressive bear eyes that try to communicate with her human daughter, and never resort to obvious puppy-dog cuteness (like the pet dragons in How to Train Your Dragon do). The curse has two days to be lifted, and in that time Elinor’s cartoonish eyes occasionally roll over into wild, black, unsympathetic animal eyes foretelling what she’ll become if the curse remains unbroken. Had Disney alone made this film, they would’ve probably just made Elinor’s bear form speak. Instead, Pixar’s long tradition of mute characters continues here. Alongside the Elinor bear, Merida’s three rambunctious brothers never say a word, yet their physical antics incite the film’s most laughs.

Not everything about the film works as seamlessly as other Pixar efforts, though; and one or two plot holes become distracting upon reflection. Long in development, Brave changed hands from its original director Brenda Chapman (The Prince of Egypt), to Pixar writer and artist Mark Andrews, and finally to Steve Purcell. All three directors receive separate screen credit. This is not to suggest that the film feels out of joint, but as the mood shifts dramatically throughout the film, some ideas are forgotten. Consider the witch, accompanied by an annoying and pointless talking crow; later in the story it becomes evident she’s been cursing Scottish royalty for centuries, but the film never addresses her motivations or resolves her presence as an antagonist. After she places the curse on Merida, she never appears again in the flesh. A smaller quibble concerns the folkish songs, sung by Julie Fowlis, which stand out like a sore thumb in this setting. The theatrical trailer for Brave features a gorgeous ballad performed in Old English; how wonderful that music would have been to lend this film further artistic integrity. In-between the songs is a score laden with bagpipes and drama by Patrick Doyle.

Of course, Pixar’s highest quality of excellence resides in their animation. This is a beautiful film rich with eye-popping color contrasts, expansive landscapes, and atmospheric and foggy night-time scenes. Lushly green highlands and dark forests are offset by phosphorescent blue wisps beckoning Merida closer to her destiny. The characters have a stylized look, but their expressions (the way Merida crinkles her nose when she giggles, for example) have such surprising human distinction to them. The animals, both Elinor’s bear form and the wicked bear Mor’du, move realistically and provoke some genuine feelings of fright in the climactic bout. But Pixar’s greatest achievement here is Merida’s hair, a bright blaze of oranges with layers of different curls, some bound tightly and others lesser so, all bundled together in a shambolic mess signifying the character’s signature tom-boyishness. The color and curls are so vivid and intricate that at times I found myself lost in the splendor of Merida’s hair.

There’s been some negative feedback about Brave that suggests the material is too conventional for Pixar—that the studio opted for a more classical and therefore less interesting story to tell, far removed from the inventiveness of their landmarks: Finding Nemo, Toy Story, Up, and WALL•E. I’m not sure those people saw the same film I did. Aside from its fairy tale characters and elements of folklore, Pixar has accomplished what they’ve always done by telling a story loaded with deep emotional relevancy and a set of universal morals that transcend traditions. More often than not, fairy tales are about reinforcing those timeless traditions, whereas this one does the opposite without promoting utter upheaval. Merida becomes a rare kind of protagonist, whose lesson tells a rapt audience that defying customs is okay, as long as we take responsibility for our actions and consider the ones we love in the process. Only through understanding can a necessary change be made. Not one Disney fairy tale before this ever boasted such a significant message. What, I ask you, is conventional about that?