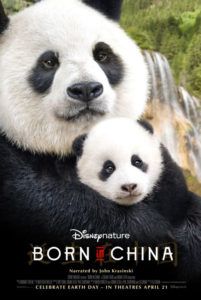 Born in China is the latest cutesy look at animals from Disneynature, Disney’s wildlife documentary offshoot. Like all Disneynature docs since their 2007 debut Earth, the film centers on parent-child relationships, with particular attention paid to aww-inducing babies. The name Disneynature says it all: it’s Nature with a lowercase “n” and Disney with a capital “D.” Animals have been anthropomorphized here in a way that humans, specifically the G-rated film’s targeted youngsters, can understand. Instead of an instructional documentary about wildlife and the natural world that accurately represents the harsh and unforgiving realities of Nature, audiences are forced to endure John Krasinski’s groan-inducing narration written by David Fowler, Brian Leith, and director Lu Chuan. Worse, when something harsh does happen, the film makes everything all right by suggesting a spiritual, decided not-Nature-based explanation.

It’s not merely that Born in China softens the inherent brutality of Nature to the filmic equivalent of a fuzzy animal calendar; that’s to be expected. But the film views its beautiful animal subjects through the lens of Orientalism (in the Edward Said sense), mysticism, and a faux story structure that has more in common with, well, a Disney animated film. To be sure, an unsubtle “circle of life” theme prevails, harkening back to the studio’s 1994 animated feature The Lion King and anticipating the planned 2019 “live-action” remake. But even Mustafa’s explanation to Simba about the natural order of the animal kingdom (“When we die, our bodies become the grass, and the antelope eat the grass. And so we are all connected in the great Circle of Life.”) has a harder edge than Born in China.

Of course, the doc looks amazing. Nature photographers received a rare opportunity to shoot in Central and Western China, capturing exceptional footage of elusive creatures in their natural surroundings. From a bamboo forest to the ever-changing climate in the snowy mountains, the film contains a wide range of lustrous sights and deserves a mild recommendation on the visuals alone. The writing and editing are more problematic. The “story” follows three distinct animal families: A panda named Ya Ya is deemed an overprotective mother of her cub, Mei Mei. “If she could, she would spend her entire life caring for her cub,” says Krasinski, relaying information from an apparent off-screen interview with Ya Ya. A golden snub-nosed monkey named Tao Tao, rejected by his parents in favor of his young sister, joins a band of fellow adolescents called “The Lost Boys.” And a rare snow leopard mother called Dawa provides for her two cubs while protecting her terrain from rival leopards.

The documentary draws comparisons between human and animal behavior instead of thoroughly exploring the species on display—an increasingly reductive approach that insists upon applying an Orientalist perspective. Consider when Tao Tao leaps and performs backflips, inciting Krasinki’s narration: “He’s training to become a Kung-Fu master!” (Ugh.) The film also adopts a Buddhist understanding of reincarnation, suggesting that a fallen leopard’s “soul” will be carried to its next host by a red-crowned crane—a much easier explanation for children who might otherwise be devastated by the animal’s meaningless death. Indeed, the filmmakers treat the Far East as a place of mysticism and wonder, lumping “Chinese culture” together with Buddhist beliefs in a way so young viewers may not be able to distinguish Nature from religion, or even Buddhism from the many cultural subsets in China.

Enduring Disney’s cute and fluffy view of Nature comes with the territory in their documentaries like Chimpanzee, Bears, or Monkey Kingdom. Even Born in China‘s silly editing that creates artificial tension by cutting back-and-forth between Tao Tao and a predatory bird can be overlooked (albeit with a grumble). But what sticks in the craw most is how the film depicts Nature through multiple filters that reshape the sublimity of these animals. This is a documentary for Western audiences that reinforces Orientalist distortions of reality, viewing Nature—majestic and fascinating though it may be—and the Far East as Others. If there’s a silver lining, it’s Disneynature’s willingness to donate a portion of every ticket to a worthy cause, supporting the World Wildlife Fund to help wild pandas and snow leopards. For that reason alone, it’s worth enduring 79 minutes of misleading narration and offensive mystification of Nature’s beauty.