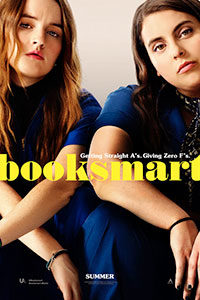 Every decade has its iconic coming-of-age high school movies that, as the years pass, deserve to be revisited for their observational humor and truth, regardless of the generation for which they were made. George Lucas’ American Graffiti (1973) looked back at the 1950s with nostalgia and launched the tradition of last-day-of-school teen party movies. John Hughes defined the 1980s, of course, with The Breakfast Club (1985) and Ferris Bueller’s Day of Off (1986), although his female-oriented pictures tend not to hold up to scrutiny (I’m looking at you, Sixteen Candles). The 1990s had Clueless (1995) and, to a much lesser extent, the troublesome Can’t Hardly Wait (1998). The 2000s had Ghost World (2001) and Mean Girls (2004), titles critical of high school’s cruel social hierarchies. Meanwhile, several filmmakers have put in their bid to define Generation Z with a coming-of-age teen comedy. And while Lady Bird (2017) may have taken that throne, it’s about a Millenial, whereas The Edge of Seventeen (2016) feels more like the open wound of modern teendom.

Booksmart, the directorial debut of Olivia Wilde, borrows components from many of the titles mentioned above to deliver an often hilarious teen comedy that, alternatively, is attuned to feminist identity, a rare thing in the genre of hard-partying, gross-out comedies involving teens, usually boys. Whereas earlier teen movies remain entrenched in cliquey stereotypes—the convenient definitions of the cool crowd, jocks, drama kids, mean girls, losers, and social outcasts—here’s a movie that suggests the lines between social roles are not so demarcated. It’s not exactly a revolutionary lesson. The Breakfast Club noted this over thirty years ago. “Each one of us is a brain, and an athlete, and a basket case, a princess, and a criminal,” wrote Anthony Michael Hall to their principal. But if teens keep putting themselves into such boxes, teen movies will keep trying to show them that these boxes are of their own making.

Booksmart was made in the tradition of the it’s-the-last-night-of-school-so-let’s-party mode of teen movie. Many have compared it to Superbad (2007), but Greg Mottola’s comedy was preoccupied with two virgin boys desperate to experience sex before college. This movie questions what happens when honor roll students Amy (Kaitlyn Dever) and Molly (Beanie Feldstein, younger sister to Superbad star Jonah Hill) realize their jealous devotion to academic excellence means they missed out on a world of social experience. The introverted lesbian Amy and the type-A overachiever Molly have worked tirelessly to ensure they’ll get into Ivy League schools. Their idea of a wild night is watching a Ken Burns documentary, creating fake IDs to use the all-night UCLA library, or experimenting with a stuffed panda bear. But their seemingly less devoted classmates, the ones who party, take drugs, and have sex on the weekends, got into the same schools. Upon learning this, Amy and Molly set out to see what they’ve been missing.

Wilde follows the friends on their desperate journey to cram years of social experience into a single night, accenting most scenes with repetitive use of slow-motion set to loud, thumping music (the overplayed “Nobody Speak” by DJ Shadow and Run The Jewels appeared on the soundtrack, and also two movie trailers before Booksmart). A good portion of the movie plays like a music video, and the approach becomes a little redundant and oppressive. Elsewhere, the playful direction allows for some absurdity, such as an animated sequence where Amy and Molly take a hallucinogen that makes them believe they’ve been transformed into Barbie-type dolls, which is less funny than it sounds. More amusing and random is the strange ability of a whacked-out girl, Gigi (Billie Lourd), to appear at various parties throughout the evening suddenly, or the scary revelation about a pizza delivery guy (Mike O’Brien) who gives the girls some good advice about not trusting strangers.

The screenplay, credited to four writers, was originally written in 2009 by Emily Halpern and Sarah Haskins, and subsequent rewrites by Susanna Fogel and Katie Silberman updated the material with modern themes. There’s an undeniable, even optimistic wokeness present in Booksmart that ignores the unfortunate reality that not everyone in high school is interested in social justice. However, the movie’s treatment of Amy and Molly is complex and rewarding, and the performances by the two leads offer hilarious and emotionally raw moments between the characters. This is a movie that understands the sometimes intense, delicate relationships that develop between two outcasts who have no one else. And when one or both parties start to experiment outside of their tight-knit bond, with crushes Nick (Mason Gooding) and Ryan (Victoria Ruesga), jealousy and resentment are bound to emerge. Fortunately, the screenplay carefully balances its mild raunchy humor with dimensional characters who defy the usual stereotypes.

Although Booksmart doesn’t break new ground or redefine the genre of teen comedies, its treatment of the material resonates enough that Generation Z will undoubtedly cling to the movie for years to come, especially young women. Dever and Feldstein find themselves in star-making roles, the former tackling the awkwardness of sexual uncertainty (followed by devastating embarrassment), the latter a bastion of physical comedy and female strength. Both Amy and Molly have their serious heroes from Michelle Obama to Queen Noor of Jordan, while both allow themselves to be the butt of several jokes. The movie distinguishes itself with these two performers in their respective roles, whereas the experiences and lessons learned during their R-rated antics seem rather commonplace in the realm of teen movies. Even so, the laughs are hearty, and the clichés are effective, making Booksmart a worthy entry in the canon.