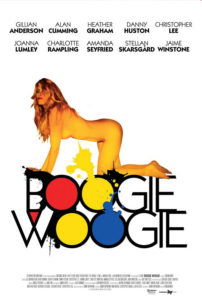 Boogie Woogie comes from the novel by Danny Moynihan, which aimed its satirical guns at the New York art scene in the 1990s. With the film, however, Moynihan redirects his sights onto the contemporary London art market, where unscrupulous characters buy and sell art with the same faux passion that they might display when selecting a new pair of shoes. As one character puts it, the industry is about the exchange of money, nothing more. Scornful depictions of buying, bargaining, offers and counter-offers, plenty of sex and drugs, and finally betrayal, make the film an all-inclusive milieu containing plenty of rotten people doing rotten things.

Moynihan adapted his own text into the screenplay, which was directed by Duncan Ward. The presentation takes a clear cue from Robert Altman’s ensemble films, but Ward doesn’t find a way of connecting the characters in that miraculous way in which Altman, or even Altman’s followers like P.T. Anderson, made it seem so effortless. Although the backdrop is littered with some of London’s finest works of modern art (thanks to the film’s pseudo-curator Damien Hirst), the flaccid satire taking place in the foreground doesn’t amount to much more than some evident critiques of the bourgeois and their ever-self-indulgent ways.

Artists, dealers, yuppie collectors, and those who aspire to make a name for themselves in the art scene populate the scenery. Every character has their own subplot, and most of them involve shady backhanded deals and love affairs that double as power plays. Having a star-studded cast, no matter how impressive the roster, doesn’t make the movie. And yet, Ward earns himself points by including a diverse cross-section of actors, most of them British. The best performance in the lot comes from Danny Huston as, yes, Art Spindle, a silver-tongued dealer who wheels and deals with nearly every other character. Huston steals his scenes with that disingenuous laugh, soothing voice, and smile like the devil himself.

Spindle’s assistant, Beth (Heather Graham), has aspirations of backstabbing her boss and opening her own gallery. She’s promised the financial backing to do so by Spindle’s top buyer, Bob Maccelstone (Stellan Skarsgård), her lover and business partner. Of course, Bob’s wife Jean (Gillian Anderson) doesn’t know about Beth, but she’s busy chasing after the hot new artist in town, Joe (Jack Huston, Nephew of Danny and Anjelica Huston). Beth finds herself new talent for her gallery in Elaine (Jaime Winstone), a lesbian video artist who records every moment of her sordid, impulsive personal life, even when she’s destroying her former friend (Alan Cumming). Meanwhile, the financially desperate Alfreda Rhinegold (Joanna Lumley, from Absolutely Fabulous) schemes with her mischievous servant (Simon McBurney) to sell her husband’s prized painting for millions. But her aged husband, Alfred (Christopher Lee), clings dearly to the title’s early Mondrian, being the only character in the bunch who appreciates art as art, as opposed to art as commodity.

The film can be as crude and transparent as its subject, with no end to the bad behavior and lechery, nor to the clichés abound. In addition to an art dealer named Art, there are also poodles named Matisse and Picasso, and a young innocent (played by Amanda Seyfried) who is nearly molested by industry scum, but learns her lesson when a piece of herself quite literally becomes a part of the art market. The satire is trite and overemphasized, with every character in the ensemble representing a rather palpable thematic device. Moynihan and Ward might’ve intended their unmerciful send-up to be funny, but instead, it feels brash and tasteless. And sometimes being brash and tasteless is exactly what makes great satire, except the outcome here is too drastic and obvious to be considered any kind of success.