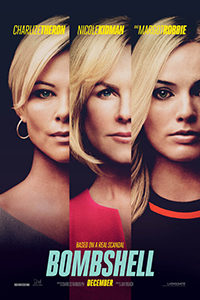 Bombshell asks that you root for women who stood up against sexual harassment in the workplace. That shouldn’t be too much of a challenge, right? If you didn’t already think inappropriate behavior at the office was wrong, there was the Anita Hill-Clarence Thomas scandal of 1991 to remind you, then the public discussion in the wake of #MeToo, both of which helped people realize how these violators operate within systems designed to protect them. The film tells the story of several Fox News anchors who, prompted by a lawsuit filed by Gretchen Carlson, stood together against Roger Ailes in 2016. More than a year before stories broke of Harvey Weinstein’s many accusers, Ailes was fired, and Carlson, along with Megyn Kelly and other victims, emerged as the heroes of their story. And yet, watching Bombshell leaves you with a sense of uneasiness. Though no one deserves to be sexually harassed, that doesn’t make it easy to be on the side of figures like Carlson (who called LGBTQ rights a “distraction” from real issues) and Kelly (who was fired from NBC for defending blackface Halloween costumes).

The film is the latest meta-infused take on a ripped-from-the-headlines story populated by A-list performers, an increasingly tiresome format since last year’s Vice. Its director, Jay Roach, helmed two such films for HBO already: In 2008, Roach directed Recount, about the voter irregularity scandal of the Bush/Gore election in 2000. A few years later, he made the political drama Game Change, featuring Julianne Moore as Sarah Palin and Ed Harris as John McCain. For Bombshell, Roach teams with screenwriter Charles Randolph, who won an Oscar for his work with Adam McKay on another film of this type, The Big Short (2015), which broke down the 2008 financial crisis in Layman’s terms. Their film about Ailes and the Fox News sexual harassment lawsuit features a cast that may be the year’s best, including Nicole Kidman as Carlson, Charlize Theron as Kelly, and John Lithgow as Ailes. There’s also Margot Robbie, Allison Janney, Connie Britton, Kate McKinnon, Jennifer Morrison, and another dozen or so familiar faces. The sheer star power makes Bombshell impossible to avoid, however distasteful a film about Fox News anchors may sound.

Roach borrows his style from McKay’s brand of irreverent, postmodern humor. This is a film where the characters break the Fourth Wall to explain complex issues, animated diagrams detail the hierarchy of the Fox News headquarters, and the cast disappears into winking performances of real-life figures. At times, the tone is satiric; elsewhere, it’s gravely serious. Through the ups and downs, there’s a subtle sense of humor about everyone employed at Fox News, just enough to avoid robbing them of their humanity as characters in the unfolding story. Bombshell knows its a film about women who have been called out for their racist and narrow views. And though Roach uses a brief clip of Kelly arguing that neither Santa nor Jesus could be black (which happened), it doesn’t make the problematic personality traits of Carlson or Kelly a problem. Still, there’s an undeniable commentary when someone at the cable news channel worriedly asks Kelly, “Are you a feminist?” as if they’re asking “Are you leper?”

Bombshell kicks off with Carlson talking to attorneys (Stephen Root, Robin Weigert) after she’s demoted from Fox & Friends for declining Ailes’ sexual advances. She details her experiences with on-air harassment and remarks from Ailes, such as “You’re sexy, but you’re too much work.” It’s an open secret about Ailes’ behavior, Carlson tells them, and many consider it a crass joke when he says, “To get ahead, you’ve got to get a little head.” When Carlson finds herself fired, the lawsuit is filed, and the announcement reverberates through the Fox News offices as other victims come forward. Eyes turn to every woman promoted by Ailes, including Kelly, who has just clashed with presidential candidate Donald Trump over his notorious “blood coming out of her whatever” remarks. The film reminds us that, not so long ago, Ailes quieted Kelly and others from criticizing Trump too harshly—a sacrifice that earns Kelly some justified scorn from her husband (Mark Duplass) for making Trump’s remarks somehow acceptable in modern political rhetoric. 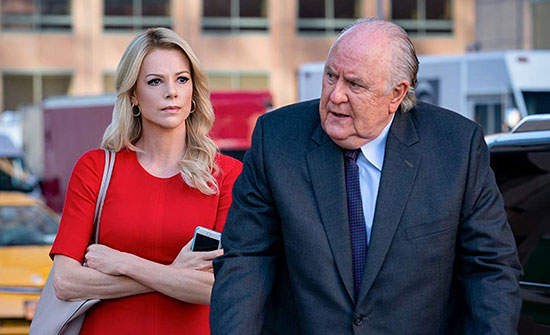 Along with the real story, Roach includes scenes “created for dramatic purposes” involving the fictionalized character Kayla (Robbie), a composite of several Fox News employees who fell victim to Ailes’ predatory scheme, so that we can see the behavior up close. Desperate to make it on the air, Kayla visits Ailes in his office, behind a door with electronic locks, where dozens of women before her have endured his advances. As she extols her passion for the network, Ailes asks to see her legs. “It’s a visual medium,” he explains. Watching the excruciating scene gives way to another, off-screen encounter, the result of which Robbie conveys in a pained confession to her coworker, Jess (McKinnon). Meanwhile, the inclusion of McKinnon’s character, a lesbian who must hide her sexuality, illustrates a workplace environment that would condemn her if she came out. The brief and spontaneous bedroom scene between Kayla, apparently bi-curious, and Jess, in the latter’s apartment strewn with Hilary Clinton posters, delivers the film’s most natural performances—perhaps because they’re not encumbered by capturing real people with well-known mannerisms.

Indeed, the first time you see Charlize Theron in full makeup as Megyn Kelly, her appearance and the perfect recreation of Kelly’s low, commanding tone of voice require the viewer to acclimate. It’s the sort of change that isn’t apparent at first glance. You will wonder if Theron has been enhanced with CGI, similar to the effects used on Robert DeNiro and Joe Pesci in The Irishman this year. After a minute or two, you come to realize that some fake eyelashes, a heavy dose of dark eye makeup, and a haircut do the trick, making Theron disappear into another chameleon performance. The result is aided by makeup artist Kazuhiro Tsuji, who won an Oscar in 2018 for transforming Gary Oldman into Winston Churchill for Darkest Hour.  The makeup used to render Kidman into Carlson is less successful, whereas Ailes has the look of John Lithgow in a fat suit. Regardless of surfaces, each of the performances is memorable.

Roach has made a film that cannot help but feel involving, filled with outrage about the behavior of Ailes and, by extension, Trump. As for the viewer’s ability to empathize with people like Carlson and Kelly, it’s admittedly a challenge. In the end, as the women stand up against Ailes, and he receives his comeuppance, it’s easy to cheer for their victory—even though the film uses the moment to engage in a stilted speech about the importance of speaking out against harassers, as if Bombshell were required viewing by your company’s HR department. Of course, no woman should have to endure such behavior, regardless of their political leanings or their views on the humanity of people with certain racial and sexual orientations. Even so, watching a film about Kelly standing up against Ailes, even though she backed down against the serial harasser now in the White House, makes the viewer feel a little ishy.