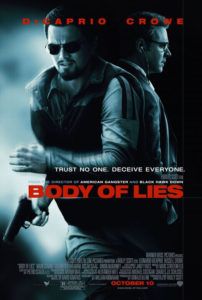 Body of Lies follows a central philosophy in which well-meaning antiterrorism approaches the very thing it seeks to destroy. Maintaining a tightly-knit yarn involving CIA spies, terrorist plots, and an exorbitant misuse of power, the result contains as much excitement as it does sharp contemporary relevance. Set at a breakneck pace, the film doesn’t slow, challenging the audience to keep up as it jumps from country to country, always staying ahead of its viewers in the way sophisticated moviegoers savor.

Rather than going into detail about the multifaceted plot, first consider the foundations of its characters: Leonardo DiCaprio stars as Roger Ferris, an agent fluent in Arabic who seemingly lives in the Middle East, caught between the ever-present threats on the ground and the voice instructing him from thousands of miles away. Belonging to Ed Hoffman (Russell Crowe), the voice in Ferris’ ear is nihilistic and selfish, determined to fight a war with technology when the enemy has disconnected all equipment. The two communicate almost exclusively by phone, the soldier Ferris on a cell, and Hoffman on an earpiece (always comically attending to some mundane family scene going on in the background).

In Jordan, Ferris makes contact with Hani Salaam (British actor Mark Strong), the resident intelligence chief whose plan to expose an Al Qaeda terrorist flooding Europe with bombings is the tactical placement of a mole. Not good enough for Hoffman, who despite agreements between Ferris and Salaam operates on his own accord without consideration of the consequences to his operative. While desperately trying to obtain Salaam’s trust, Ferris attempts to keep Hoffman back, losing credibility and possibly his life should Hoffman’s impatient decisions make it appear as if Ferris has broken his word.

The performances are as complex as the subject matter. DiCaprio delivers another in an impressive string of roles, adding weighted gravitas with burgeoning visual anguish in his eyes. Crowe reportedly packed on fifty pounds for the role of Hoffman, playing him as detached from both sides of his life, almost cartoonish in his deviousness and arrogance. These two name actors are given a run for their money by Strong, from Stardust and Sunshine, who, disappearing into the Jordanian role, offers a character both smooth and terrifying in his sense of strategy.

Given the actionized nature of this whirling spy story, visionary director Ridley Scott might be accused of making something more aligned with his brother’s career. But Body of Lies remains a coherent and mature thriller, versus the over-edited and occasionally mindless features of Tony Scott (such as Enemy of the State, Man on Fire, and Spy Game). Ridley knows when to tell a story with elegance and patience (Alien, Blade Runner), and when to turn up the volume (Black Hawk Down). And his stylized approach always tenders visual clarity, even amid shootouts and explosions when the camera is shaking about, sand is in the air, and gunfire rockets from all directions.

Adding the density we’ve come to expect from his work, screenwriter William Monahan adapted David Ignatius’ novel into a twisting and exciting text. If you’re unfamiliar with Monahan’s name, please make a note to yourself to track his career. His first credit came in 2005 with Scott’s wonderful Kingdom of Heaven, a massive and thoughtful epic only so on the Director’s Cut DVD, versus the neutered Theatrical Cut. And lest we forget Monahan is an Oscar winner for his bravado effort on Martin Scorsese’s The Departed. Monahan brings to the foreground a sense of energy and fleshed-out characterization, even while acknowledging the sad but sometimes necessary truth that the intelligence community bears a wealth of moral ambiguity.

Few actioners this fine harbor such acumen and narrative complexity, avoid becoming a clear message and still keep us involved. Somewhere between similarly-themed films like The Kingdom and Traitor, Scott’s picture lends meaning to the action, whereas the former was excessive violence and the latter approached melodrama. Asking bold questions about the consequences of retaliation and its prospective slippery slope, the film neither preaches about nor ignores the current geopolitical nightmare, and yet also manages to be incredibly entertaining.