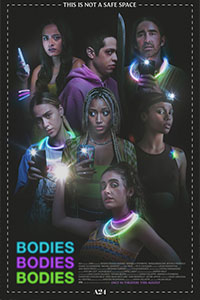 In an age when everyone’s putting up false fronts on social media, how do you trust anyone? You might ask yourself that question while watching Bodies Bodies Bodies, a slasher-style horror movie about a group of Generation Z friends trapped in a hurricane party whodunit. Glued to their phones even before their devices become the only light source after the power goes out, the characters communicate in Twitterspeak buzzwords, irony wrapped in snark, and performative outrage. Once the first corpse shows up, they replicate online behaviors by latching onto an idea and vilifying it without evidence. There’s no time for clear-headed thinking when you can easily call out someone else for “escalating” or “silencing” or declaring someone “toxic” or “ableist.” Based on a screenplay by You Know You Want This author Kristen Roupenian, the screenplay by Sarah DeLappe (a finalist for the 2017 Pulitzer Prize for drama) both reflects and critiques behaviors that could be seen as an amplified Twitter feud translated into a horror movie scenario. Although the surface looks like standard body count fare, the film feels fresh and of the moment.

So many horror movies today rely on unsubtle nostalgia and allusionism, evidenced in their outright replication or direct references to their antecedents. The last year alone contains several examples of horror standing on the shoulders of giants, often in a desperate attempt to reestablish old franchises for contemporary audiences. Halloween Kills continues from 2018’s Halloween, which gave the franchise the retconned sequel or “requel” treatment. The same is true of this year’s Scream, which sought to satirize the current state of horror, albeit unsuccessfully. Even something like Ti West’s X, a superb film not based on previous material, owes a massive visual and tonal debt to The Texas Chain Saw Massacre (1974). And so, perhaps it’s fitting that Bodies Bodies Bodies is distributed by A24, an indie production company often on the cutting edge of contemporary filmmaking techniques and attitudes. If the film doesn’t reinvent the slasher, it nonetheless deploys the genre framework to hold a mirror up to a particular contingent of rich kids who become monsters when the WiFi goes out.

Halina Reijn, a Dutch actor who recently turned to directing, makes her English-language debut with Bodies Bodies Bodies—a film whose logline reads like countless others of this ilk, yet its characters prevent it from feeling like you’re watching a variation on a tired theme. The typical tropes apply: an isolated estate; a mounting storm; a group of strained friendships that, when combined with drugs, alcohol, and no power, present one red herring after another. It’s riotously appropriate that Curtis Roach and Tyga’s “Bored in the House” stands out on the excellent soundtrack as the film’s anthem. The story follows Bee (Maria Bakalova, the breakout from Borat Subsequent Moviefilm), an outsider whose girlfriend of six weeks, Sophie (Amandla Stenberg), drives them to a gated mansion owned by the family of her oldest childhood friend, David (Pete Davidson). Sophie’s friend group plans to get wild once the storm begins, starting with a game of “Bodies Bodies Bodies”—a larping murder mystery where one of them plays a secret killer and the others try to expose the culprit. But once someone shows up dead for real, everyone’s a suspect. 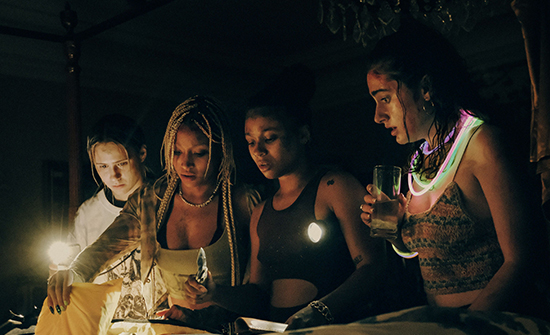 Could the killer be Sophie, a recovering addict whose friends resent her for not participating in a group text? After all, Jordan (Myha’la Herrold) warns Bee to “be careful” with Sophie, but then Jordan’s reasons may be selfish. However, maybe it’s Bee, the quiet stranger who outs herself as not one of their crowd by bringing zucchini bread to the hurricane party. Then there’s David, who seems like a ball of rage ready to burst, while his girlfriend Emma (Chase Sui Wonders) may be getting tired of David treating her like garbage. Alice (Rachel Sennott, terrific in Shiva Baby) seems like the least likely killer, given that she’s the loudest and probably an open book; however, she might be driven to murder after she learns that her friends don’t like her podcast. And what of Alice’s new Tinder find, Greg (Lee Pace), a conspicuous, Adonis-bodied weirdo about two decades older than everyone else? Also, we keep hearing about some guy named Max who disappeared after a row with David the night before—could it be him? The script deftly keeps the viewer guessing while it explores the characters in their sometimes catty, sometimes ridiculous, and often hilarious behavior.

Refreshingly, the film never overemphasizes its critique of Gen Z behavior or social media. Some critics have viewed its accurate portrait as a pure representation without commentary, and certainly, that’s a valid argument. There’s never a speech that calls out their overdependence on their phones or their social mediatization of their in-person interactions. But given the predicament in which these characters find themselves, it’s worth questioning whether the filmmakers have simply put a particular group of privileged twentysomethings into a whodunit situation, or if the filmmakers are using that situation to comment on the depicted behavior. Take the opening scenes, where Sophie and Bee make a roadside stop for some passionate kissing, and their affection is interrupted by a quick cut to the couple in the car, inches from one another, immersed in their respective phones. Bodies Bodies Bodies recognizes the current need to project emotional openness and empathy, even while our devices distract from making necessary and true personal connections.

This idea is captured by cinematographer Jasper Wolf’s handheld camerawork that, in the film’s latter half, with the hurricane at its worst, follows the characters around in the dark, illuminated by nothing more than a smartphone’s flashlight setting (and the occasional neon glowstick necklace). They grip their phones like a lifeline, despite having no service. Without it, their world would be total darkness and solitude. And the punctuated ending seems to comment on the behaviors that propelled this situation in a manner recalling Tucker & Dale vs. Evil (2011) or Knives Out (2019), making the film less a substance-less foray into slasher territory for Gen Z crowds than a statement about its target audience. Along with some prickly ideas about upper-class apathy, white feminism, and corrosive friend groups, Bodies Bodies Bodies is about more than its hyped-up marketing would suggest. In that respect, it feels less like a sensation machine and more aptly compared to A24’s Zola from last year, except with decidedly more dead people.

Chock-full of memorable deaths and extreme reactions to personal betrayals, Bodies Bodies Bodies is also ridiculously funny—mainly because the cast brings such pointed characters to life, heightened by various substances. Their grim party game cannot help but compel accusations, hurt feelings, and paranoia, all of which have a comic undercurrent. It’s as though the audience takes the role of the one sober person at the party, and then watches everyone panic and fall apart. Reijn works with her excellent actors to create characters who stand out from the unmemorable human fodder that usually accounts for slasher movie victims. DeLappe’s dialogue is at once cutting and subtle, barbed with harsh confrontations about secrets and stored feelings, yet precise without soapboxing its critique of the unchecked and destructive behavior on display. Bodies Bodies Bodies is at once a keeps-you-guessing whodunit and a sharp cultural critique, and it will only get better with a rewatch, after its last-scene revelation reframes everything that came before and reveals its true colors. This is inventive, fun, and wildly entertaining stuff with more on its mind than fulfilling a standard genre exercise.