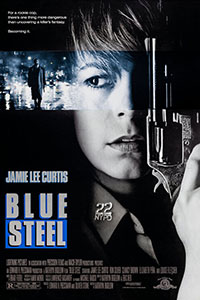 From the title sequence of Blue Steel, when the camera explores the vaginal cylinder chambers and phallic barrel of a handgun up close—in a similar tactic used by Julia Ducornau on automobiles in Titane (2021)—the film signals its interest in gender and identity. Kathryn Bigelow’s third film as director feminizes the traditionally masculine genre of the urban cop thriller, following a female rookie cop who, fresh out of the police academy, finds herself stalked by a lunatic Wall Street trader. Upon its release in 1990, the rise of feminist film theory and female police offers on the streets made the film a product of a moment, and it still proves ripe for analysis and deconstruction today. Bigelow reconsiders movies driven by masculine archetypes such as Dirty Harry (1971) or To Live and Die in L.A. (1985), deploying an inversion that, while intellectually challenging from a gender studies perspective, fails to achieve many of the hallmarks of a good thriller. Ultimately, Bigelow undoes her main character by bending the narrative to meet the demands of an overloaded gender contrast and genre critique, often in unnaturally stuffed and downright absurd ways. The result is a film that functions better as an academic case study than a compelling thriller with behaviors that make sense on logical or emotional grounds.