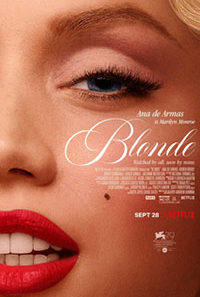 Director Andrew Dominik has made films about a notorious Australian criminal (Chopper, 2000); one of the American West’s most famous outlaws (The Assassination of Jesse James by the Coward Robert Ford, 2007); a group of viscous mobsters, hitmen, and scuzzy lowlife criminals (Killing Them Softly, 2012); and his next film is about Navy SEALs. Given that his work centers almost exclusively on violent men, it’s curious that he has made Blonde, a portrait of Marilyn Monroe’s objectification by the late Hollywood studio system and, by extension, American culture. Monroe was one of the twentieth century’s most recognizable icons, but she lived a hard life as an obscure object of desire. Dominik’s bleak look at Monroe shows the performer used, abused, chewed up, and spit out by the men in her life. In a way, it continues his career-long preoccupation, albeit by focusing on the receiver of male violence. Ana de Armas gives a convincing and sympathetic portrayal of Monroe, but the two-hour-and-forty-minute Netflix production ultimately makes the same points experimental filmmaker Bruce Conner made in his 14-minute short film “Marilyn Times Five” in 1973—that Monroe was a victim of voyeurism, and that the fetishization of her image only furthers the tragic legacy of her story.

The full 1,600-word review is currently posted on Patreon. Join Deep Focus Review’s Patron community, and you’ll receive exclusive access to this review and many others writings published on Patreon first.