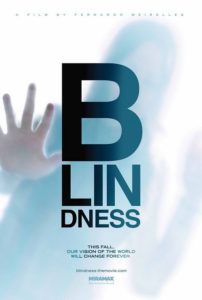 “Unsettled” best describes my feelings toward Blindness, both in the sense of how the picture affected me emotionally, and in terms of how the story plays out. Probing into the depths of humanity is never much fun, as we’re a savage race, but this experience will test even the most resolute viewer. Trials come from all realms of the grotesque, including rape, starvation, power-mongering, and murder, as well as a distracting array of filmic techniques used behind the camera. Grim, pretentious, brilliant, and awful all at once, the film undeniably provokes its audience, to what end remains the question.

The story begins small with one man (Yusuke Iseya) suddenly going blind at a stop light during morning rush hour traffic. Seemingly a Good Samaritan, another man (Don McKellar, also the screenwriter) helps the first, drives him home, and then reveals his true colors when he steals the blind man’s car. Things don’t get much better from an ethical standpoint as the film progresses. An optometrist (Mark Ruffalo) attempts to treat the blind man, but instead catches the apparently contagious sightlessness himself. The doctor and his wife (Julianne Moore), whose vision remains intact throughout the film, are soon taken by government escort to a quarantine zone established for those infected, which in days becomes hundreds.

You’ll notice I’ve avoided listing character names. It’s because there are none. The film is so intent on its symbolic message that it refuses to subject its characters to labels as insignificant as names. Once everyone is inside the abandoned prison that’s now their biohazard home, they’re placed in charge of food rationing, voting for leaders, and caring for themselves until the medical community can understand the contagion. For a while, Moore’s character plays the mother to them all, having the advantage of sight, which she keeps secret but people seem to know anyway.

She’s their Mother Teresa until further infected are admitted. Among new residents comes a tyrant (Gael García Bernal) who, backed by an exceedingly heartless army, takes control of the food, only distributing rations in exchange for valuables. And when all the jewelry is gone, payment is demanded via communal rape sessions. Banding together is a group of good-hearted individuals: Danny Glover plays an elder, gentle wise man; Alice Braga plays the cliché prostitute-with-a-heart-of-gold; and young Mitchell Nye plays a boy lost among the disorder.

An exceptional filmmaker, City of God and The Constant Gardener director Fernando Meirelles is unfettered in his manipulation of the cinematic apparatus, employing every tool at his disposal. We have whitewash saturations, whole scenes shot black with only the audio telling us what’s happening, and enough fuzzy, out-of-focus imagery to inspire one to close their eyes for a little normalcy. His free-form stylization of every frame seems to cater to his own artistic needs, leaving the audience with much to desire in this mishmash of art film and thriller.

Based on the novel by Portuguese author José Saramago, Meirelles’ film contains harrowing moments involving Moore’s endurance through the social abjection all around her, mopping up the horrors as she goes. His allegory, I suppose, discusses the depths to which humanity sinks under mass hysteria or sickness, incorporating a Jesus-like figure bringing order to the madness. Collecting all the trappings from Albert Camus’ The Plague, these ideas are not new, and are explored with heightened transparency. We’re subject to an obvious religious message suggesting that the blind are being punished by God for their sins, and only when happy community and family values reenter daily life will we be able to truly see.

From a certain point of view, particularly that of the artist, Blindness is an achievement worth appreciating in all its horrible glory. There is, however, a statute of limitations for how much artistic abuse a viewer should have to suffer from commercial cinema. And while nothing pleases me more than challenging moviemaking, the nature of this confrontation imbues so much suffering that the eventual resolution feels meager in comparison, even confused as to its vague meaning. Had the film put its audience through the gauntlet and secured them a clear compensation in the end, the result might be worth the trouble. But as is, there’s no need for viewers to subject themselves to such thematic and visual debasement.