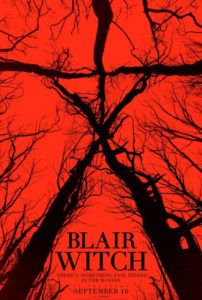 The Blair Witch Project paved the way for dozens of horror movies shot in the “found footage” subgenre, but the 1999 hit produced only one sequel, the best-left-forgotten Book of Shadows: Blair Witch 2 from 2000, which cashed in on its predecessor’s triumph with a blandly straightforward presentation. The original film’s writing-directing duo Daniel Myrick and Eduardo Sanchez attempt to correct that mistake by executive producing Blair Witch, a highly secretive project developed by the creative team behind You’re Next (2013) and The Guest (2014). As frequent collaborators, director Adam Wingard and writer Simon Barrett may be the most exciting genre filmmakers working today; nevertheless, their sequel proves disappointing for its dependence on the original’s template, while their innovations range from terrifying to nonsensical. A few neat ideas and effective jump-scares might entertain audiences, but the film feels like too little, and more than a decade too late.

Shooting in secret and, for the first few months, marketed under the name “The Woods,” Wingard’s film was eventually revealed to be Blair Witch at the 2016 San Diego Comic Con, just over a month before its release. Earlier this year, a similar strategy worked on the sequel 10 Cloverfield Lane, as no one knew a follow-up to Cloverfield was in production until a trailer debuted just a few short weeks before its release. It’s a strategy that keeps the impending release fresh in our minds, as opposed to the 12-month pre-release advertising process for most blockbusters today. A concentrated campaign remains genius from a promotional standpoint, and in the earlier example, enhanced an already superior film. In the case of Blair Witch, no amount of marketing can stop the film from feeling repetitive and, by the end, inconsistent.

Blair Witch finds Wingard and Barrett’s edge subdued, perhaps because, according to interviews with the filmmakers, Lionsgate reportedly wanted a rehash of The Blair Witch Project more than something altogether new. The plot hits all the same points: An investigatory trip into the vast woodlands outside of Burkittsville, Maryland—which, according to local legend, are haunted—leaves documentary filmmakers lost, only to be pestered by unseen tormentors, and eventually led to their demise. The pretense, this time, connects back to Heather Donahue, star of the original film. Her little brother James (James Allen McCune), also a documentary filmmaker, wants to know what happened to his big sister and believes she may still be alive. In this film’s continuity, apparently the footage from The Blair Witch Project was never recovered, because Jason and his friends aren’t frightened about venturing into the woods to find his sister.

Barrett inserts additional characters for an added body count. Among them, James’ would-be girlfriend Lisa (Callie Hernandez), as well as the coupled Ashley (Corbin Reid) and Peter (Brandon Scott). Local oddball fanatics Lane (Wes Robinson) and Talia (Valorie Curry), who claim to know the forest where Heather disappeared, join this foursome in an antagonistic role. Once the group enters the forest terrain, the scares, and false scares, begin after minimal buildup, leading to familiar warning signs: rock piles, stick figures hanging from trees, and creepy sounds in the night. But there are also some fascinating, if random, twists. A body-horror sequence may make you lose your lunch, while a head-scratching temporal element contains some haphazard logic. Fortunately, Blair Witch offers more of a glimpse at the titular culprit than its predecessors (think Quarantine or Grave Encounters), even though the conclusion has much of the same abruptness.

Though the budget has increased from the original’s $60,000 to Blair Witch’s $5 million, the production still looks appropriately DIY, aside from the inclusion of a few tech upgrades. Tiny personal cameras worn around the ear capture face-to-face shots, allowing for conversational reverse-angle cuts. The group also brings along a camera drone, which the film seems to build up as something special (until, that is, it gets stuck in a tree). Regardless of the usual shaky-cam antics that prevail in “found footage” material, the filmmakers give the key moments just enough clarity. Wingard and Barrett explored similar “found footage” material before in the more-interesting-than-entertaining V/H/S (2012) and V/H/S 2 (2013), contributing the most compelling segments to each anthology. Wingard excels at controlling handheld digital photography and bringing lucidity to otherwise incoherent framing. There’s even a kind of beauty in how Wingard uses wobbliness of handheld digital cameras, as evidenced on his underseen shocker A Horrible Way to Die (2010).

Months before the film’s release, the trailer for Adam Wingard’s “The Woods” looked creepy and horrifying, whereas the very notion of the Blair Witch seems overly dependent on brand recognition. Blair Witch follows that brand, except when it doesn’t, and in those instances the deviations are scary but do not align with the rules and mythology established by The Blair Witch Project. Had Wingard’s film not been associated with the 1999 film, its holes in plot and logic would be less gaping, and the entire experience would have been more palatable. Instead, we’re left asking questions and trying to resolve how, if at all, we should view these titles alongside one another. Although capably made and bound to produce moments of tension, dread, and shock, the film leaves the viewer unfulfilled, albeit in different but equally unsatisfying ways as the original.