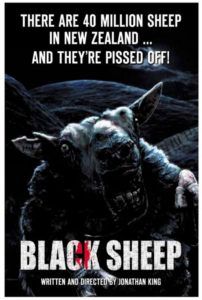 Who would have thought that in 2007, three (yes three) movies would offer zombie-esque creatures getting hacked up by propellers? In Robert Rodriquez’s half of Grindhouse, called Planet Terror, the undead were run down by a pursuant helicopter; the result required windshield wipers. In 28 Weeks Later, the infected were mowed down like so much grass, their infected blood spraying out like a broken sprinkler. And now, with Black Sheep, a half-man half-sheep creature is chopped from behind with an airplane propeller. And it’s gooey.

Thanks to Peter Jackson, a Kiwi himself, New Zealand always seems to be struck with massive plagues of aliens, zombies, and orcs. However, I don’t think they ever expected sheep as a principal threat. Keeping in line with Jackson’s early films, Dead Alive (known as Braindead in New Zealand) and Bad Taste, director Jonathan King sews humor and horror in a no-holds-barred splatterfest of ravenous sheep munching on unsuspecting human victims.

King’s movie is never more complicated than that, which is the problem. We could care less about the people—these virtually anonymous characters assigned to surviving their wooly pursuers. Given that he dedicates more laughs and camera time to the livestock, the humans come off as lamb feed. To ask us to care if so-and-so is devoured by sharp-toothed fluffiness is absurd.

Shot with great attention to the beauty of New Zealand’s expansive landscape, the movie opens on a picturesque farm, rolling pastures and all. Angus and Henry are brothers; fifteen years after their dad dies, Angus has taken over the family farm, while Henry, who lives in the city, has a horrible fear of sheep. Maybe it’s because when they were kids Angus skinned Henry’s pet lamb and jumped out of the dark at him, covered in blood, wearing its skin. Maybe.

Angus hasn’t followed his dad’s example of traditional farming techniques; instead, he’s moved toward the future, using genetically engineered sheep to enhance the stock. This fact attracts animal rights activists Grant and Experience, who steal proof of the inhumane testing at Angus’ facility. Resembling the Sumerian rat-monkey from Jackson’s Dead Alive, the catalyst for Black Sheep’s outbreak of crazed, bloodthirsty sheep is a mutated and hairless baby lamb. Its bite spreads amongst the sheep, slowly transmitting whatever evils Angus’ lab has concocted. Soon, the farm is plagued by hundred of rabid beasts. They’re cute but rabid. Given New Zealand’s 20:1 sheep-to-human ratio, the potential for a countrywide disaster is just on the horizon.

When Henry returns home to collect his 2 million dollar check and half of the family farm, he’s just in time to conquer his childhood fears by way of zombie sheep. He hides in the proverbial corner every time a cute little lamb gazes at him with its blank stare. Rightfully so, since it probably wants to eat his face. The film becomes a strange hybrid of Shaun of the Dead and The Island of Dr. Moreau, offering unkillable ovine and human-sheep hybrids sprouting from every nibble.

Somewhere in King’s film, I think there’s a message. Perhaps the angry herds represent a protest against the cruel testing of abused animals. Experience, the female animal rights enthusiast, refuses to eat meat and believes in nature’s spirituality—as one could guess from her name. Signifying the legitimacy of the animal rights argument, Henry, our hero, falls for her. Then again, activists are portrayed as morons that caused the whole mutant-sheep outbreak in the first place. So, perhaps, the film suggests animal rights advocates do more harm than good. In any case, if you’re still entertained after watching a lamb masticate on a human penis, the message won’t really matter.

Gore and blood supply the film’s main attractions, whereas humor and characters are secondary, if not wholly nonexistent. I should have been frequently amused at the numerous jokes, but I laughed only occasionally, and quietly. I should have cared when Henry’s friend is bitten and his foot becomes a hoof, but I didn’t. King’s humor attempts Peter Jackson’s Dead Alive tone, except without the oddball camera angles and slapstick to back it up. There is a bestiality gag or two. Sheep hilariously spring into the air to chomp down on unsuspecting necks. Even the occasional “baaah” is funny. But the laughs never overwhelm. Hardcore fans of brutalizing, bloody gore effects will be in bliss, as there are enough open wounds and miscellaneously chunky body parts flung about and being eaten to satisfy your sickest cravings for grotesqueries. Frankly, I like a little character development before watching cute animals devour humans in a frenzied attack.