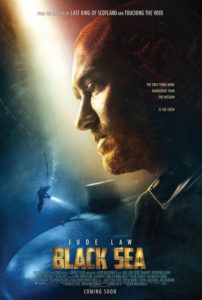 After several excellent documentaries in the 1990s and beyond, including the BAFTA winner Touching the Void (2003), director Kevin Macdonald garnered a lot of attention with his 2006 fictional film The Last King of Scotland. Since then, the Scottish filmmaker has made several solid programmers such as State of Play (2009), The Eagle (2011), and now Black Sea. Drawing from a variety of genres and conventions, the film contains elements of The Treasure of the Sierra Madre, The Wages of Fear, The Hunt for Red October, and even Moby Dick. Indeed, components of each title pulse through Dennis Kelly’s script, where an obsessed submarine captain leads a blue-collar crew of international scallywags into the depths of the titular sea for lost Nazi gold. Racked with claustrophobia, potboiler tension, and even a touch of class commentary, the effective result has been admirably made by Macdonald and deftly acted by his cast of international players.

Jude Law stars as Robinson, a sub captain who, having been sacked from his salvage company and long since dejected from the Navy, feels some heightened animosity toward The Man. His devotion to sub-marining cost him a family (seen almost exclusively in flashback) and now, at just the right moment when he has nothing left to fall back on, Robinson’s former colleague proposes something that could make many of their recently unemployed friends very rich. A German U-Boat from World War II sunk in transit from Russia to Germany while carrying millions in solid gold, and due to the subsequent disputes and politics surrounding land ownership in those waters, the U-Boat remains there. And so does its golden cargo. With financing from a wealthy and mysterious third party (Tobias Menzies), Robinson enlists a minimal crew, half British and half Russian men, all experienced in underwater salvage, all with no choice but to take part in Robinson’s mission. But once they’re underway in an old jalopy-of-a-sub, Robinson announces equal shares for all. That’s when matters get complicated.

David Mamet’s Heist reminds us that love makes the world go ‘round. “It is love,” says one of that film’s characters. “Love of gold.” When millions in unclaimed gold is on the line and traditional morality has been all but jettisoned, desperate people like those in Black Sea behave by different rules. Here, the crew quickly realizes that fewer shares mean a larger portion of the pot for those left standing, and suddenly murder becomes an option. Fortunately, the film doesn’t devolve into a sub-based whodunit, though that strain, along with many others, is evident as Black Sea progresses. Of course, there’s the submarine setting, which comes with all the usual submarine movie trappings—nothing that hasn’t been seen in earlier sub fare (radar blips, pressurization, unexplained leaks, claustrophobia, etc.). Another trope involves a class struggle both on and off the sub: some British men believe the Russians deserve a lesser share, whereas Robinson’s impetus for accepting the mission is more rooted in sticking it to The Powers That Be. Robinson’s fixation on this idea continues to grow, and he becomes more and more like Captain Ahab.

Whenever a film sets up a situation with so many potboiler elements in play, it’s almost impossible not to feel the strain on the characters, especially when the characters are so well cast. As a result, Macdonald’s actors give more to their roles than Kelly provided in his script. Wiry and with eyes like a frightened rabbit, Scoot McNairy (Monsters, Argo) is typecast as a weasely, claustrophobic company man sent along on the mission as an observer to represent the investor’s interests. Fraser, an expert diver and resident rabble-rouser, is played by Ben Mendelsohn (Killing Them Softly, The Place Beyond the Pines), who’s also typecast. Mendelsohn always plays the most despicable character on the screen, and he fulfills that role here too—a slimy, duplicitous, amoral sort. Bobby Schofield plays Tobin, an 18-year-old innocent brought along if only to keep him off the streets. Karl Davies, Michael Smiley, and David Threlfall round out the modest ensemble, while Jodie Whittaker appears as Robinson’s ex. They all boost a relatively predictable film beyond its basic description.

But even though the events in Black Sea could be called formulaic, Macdonald has nonetheless crafted an entertaining thriller. He may not delve beyond established realms, but he delivers a competent production. Modest special FX, mostly CGI, render the underwater sub scenes, but it’s inside the sub that interests us most. English B-movie lenser Christopher Ross (Eden Lake) makes excellent use of cramped spaces, rusty interiors, and varied lighting sources, leaving the film with a vigorous and gritty visual palette. But the driving force behind Black Sea remains Law’s convincing performance as a rugged, slightly mad, but wholly sympathetic captain. Not so long ago, Law was the pretty-boy behind Inman, Dickie Greenleaf, and Gigolo Joe; now he’s transformed that persona into the rugged everymen like Sherlock’s Watson, Dom Hemingway, and Captain Robinson. Law’s intensity carries the audience every step of the way, and his surprising working-class appeal, now that he’s older and more rough-around-the-edges, enhances the film’s minor social commentary about the lengths one is willing to go to get ahead.