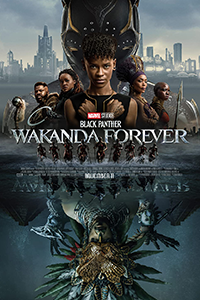 Chadwick Boseman’s tragic death in 2020 leaves a profound sense of extratextual mourning throughout Black Panther: Wakanda Forever. The sequel has the impossible task of following 2018’s original, which broke new ground for Black representation and onscreen empowerment, while also giving the MCU some awards credibility (it earned seven Oscar nominations and won three). Of course, the audience grieves for T’Challa, King of the highly advanced African nation of Wakanda, after his character dies offscreen in the first scenes. Afterward, the familiar Marvel logo appears, and instead of various other Avengers superheroes, Boseman’s icon permeates the logo’s montage, allowing the audience to share in a moment of collective grief. But our tears are less for the character than the actor who played him. Boseman died when he was just getting started, and every time the sequel talks about T’Challa’s death, we cannot help but think of the actor. And while returning director Ryan Coogler and his co-writer Joe Robert Cole (The People vs. O.J. Simpson, 2016) craft a fitting tribute in the opening scenes that reverberates Boseman’s passing and legacy from start to finish, there’s a whole lot of movie to consider besides its funerary themes.

For starters, Wakanda Forever feels overlong at 161 minutes. Although nothing is inherently wrong with a giant-sized runtime—Endgame (2019) lasted about a half-hour longer yet breezed by—this story meanders, drifting from one plotline to another without the urgency of its predecessor. The film also has a case of sequelitis, complete with another thrilling car chase featuring Okoye (Danai Gurira), another antihero-antagonist who’s determined to fight colonizers and protect his people by launching preemptive attacks, another secret kingdom deciding whether to reveal itself to the world, and another main character less compelling than the strong women on the periphery. The story centers on Shuri (Letitia Wright), who weighs how to move forward in her brother’s absence. When faced with matters of succession and a new threat from the bottom of the Atlantic, Shuri must determine whose example she will follow—that of T’Challa or Killmonger (Michael B. Jordan). Along the way, Coogler and Cole adhere to some familiar MCU structural tropes, while the film becomes bogged down by too many subplots and too much world-building inessential to this story.

Similar to Dr. Strange and the Multiverse of Madness, an underdeveloped McGuffin in the form of a teenage girl propels the narrative. In this case, Riri Williams (Dominique Thorne), a brilliant MIT student, has built a device that allows the US government to scan for vibranium at the bottom of the ocean—even though the space metal was previously thought to be a Wakanda exclusive. Since T’Challa’s passing, world powers have tested the country’s strength by trying to seize Wakanda’s top resource. But the fearsome Queen Ramonda is a cunning and bold leader in her son’s absence, defending her country with all the considerable force Angela Bassett can muster. But the existence of Riri’s machine prompts Namor (Tenoch Huerta Mejia), the ruler of Talokan, an undersea kingdom populated by blue-skinned Mesoamericans, to attack. Talokan also thrives on vibranium, and Namor’s people want Riri dead to stop any further tracking and preserve their secrecy. So Namor confronts Ramonda and Shuri, issuing them an ultimatum: help keep the world’s colonizers in the dark about Talokan, or Wakanda will become their enemy. 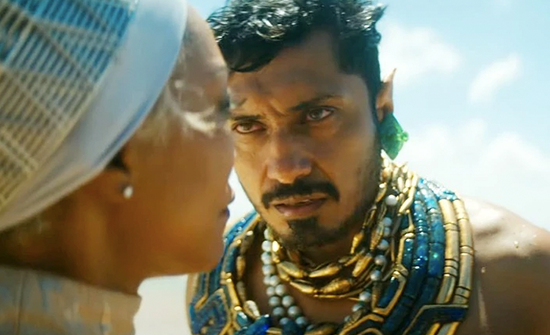 Coogler and Cole reach the globe-trotting scale of Black Panther, weaving multiple storylines into their screenplay. In Wakanda, the elders protect themselves from a Talokan attack by taking refuge in the mountains with the Jabari tribe, headed by M’Baku (Winston Duke). Agent Ross (Martin Freeman) returns to calm the CIA’s suspicions about the Wakandans, attracting the attention of his ex-wife, Director Valentina Allegra de Fontaine (Julia Louis-Dreyfus). Okoye loses her rank in the Dora Milaje after the Talokans capture Shuri and Riri, and Ramonda must enlist Nakia (Lupita Nyong’o) for an underwater rescue. With Shuri in captivity, Namor—one of the oldest Marvel Comic characters, even predating DC’s Aquaman by a few years—expounds his nation’s backstory. In Coogler’s hands, Namor’s mythology dates back to 1571 in Yucatan, when his people developed the supernatural ability to breathe underwater to avoid Spanish colonizers. Namor is a near-immortal mutant offspring with winged feet, known among his people as the serpent god named K’uk’ulkan, and Mejia, making his screen debut, gives the character an intense presence. Overall, Coogler delivers a superior concept and realization of an underwater culture next to the goofy treatment of Atlantis in Aquaman (2018), including the Talokan’s themes in Ludwig Göransson’s score. Even so, the screenplay never bothers with pesky conversations about depressurization from the ocean depths; it’s more interested in Talokan water bombs and siren songs, which make for nifty offensives in their climactic battle against the Wakandans.

Coogler navigates Wakanda’s loss, Talokan’s elaborate mythology, and someone new to don the Black Panther suit as Wakanda’s protector. But like the movie before it, Wakanda Forever’s eventual hero remains the least dynamic part of the movie next to the supporting cast. Bassett evokes emotions from traumatic heartbreak to fierce pride in her wonderfully theatrical acting style, making one wish her part had more screen time. Gurira and Nyong’o carry much of the dramatic weight as well. The exception is Thorne, who doesn’t have much to do. Riri’s lack of backstory and character development proves disappointing, and Coogler uses her as a plot device—to such a degree that other characters call her “the scientist” instead of by her name. Riri will eventually headline in the Disney+ series Ironheart—named for the Iron Man-style suit she builds—but for now, her inclusion plays more like a building block for the larger Marvel universe than an essential component to Wakanda Forever. However, had Coogler added a few minutes to give Riri some dimension, the film may have felt shorter overall by better investing us in the character and imbuing her scenes with some immediacy.

Watching Wakanda Forever, the production’s vast size, including cinematographer Autumn Durald Arkapaw’s massive shots of Wakanda and Talokan, shimmers in digital glory in the MCU house style. Coogler handles the Talokans with a thrilling sense of discovery, particularly when Okoye faces down Namor’s top lieutenants, his brutal cousin Namora (Mabel Cadona) and the towering Attuma (Alex Livinalli). Mercifully, Coogler allows Wakanda Forever to be character-driven and doesn’t resort to wall-to-wall action, giving his characters time to process the various action set pieces throughout. Still, as admirable as the film’s characters, conceptualization, and international superhero politics may be, much of the middle section drags. By the time of the extended battle sequence in the last half-hour, I found myself squirming from restlessness in the CGI chaos. In the grander scheme of the MCU, Wakanda Forever feels like one of those obligatory components designed to grow and build the franchise rather than stand alone. Of course, the sequel was never going to be as good as Black Panther, but the film allows its characters and the audience to process the death of T’Challa and Boseman with some catharsis.