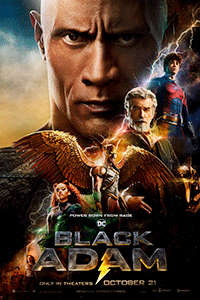 No one thought Black Adam, starring Dwayne Johnson, would be a nuanced character study about an ancient champion in modern times. And not surprisingly, it isn’t. Yet, who could have predicted the movie would lack charisma and character or rank among the worst of the DC Extended Universe? Johnson reteams with Jaume Collet-Serra, director of last year’s abysmal Jungle Cruise, for a generic shut-your-brain-off-at-the-door experience devoid of compelling heroes and overflowing with laughably dull dialogue. The movie differentiates itself from other comic-book fare with its central antihero, Teth Adam (Johnson), who’s willing to kill anyone in his way. But not even Adam’s punchy attitude can rescue this movie from its generic execution. Given Johnson’s involvement as a producer and the generally positive tract of DCEU releases in recent years (Birds of Prey, The Suicide Squad, etc.), it’s somewhat shocking that Black Adam didn’t turn out better. But its muddy visual style and emphasis on long CGI fight scenes over character development leave the experience hollow.

The Black Adam character first appeared on the comic book pages in 1945, created by Otto Binder and C.C. Beck as a nemesis for Captain Marvel (who would later be known as Shazam). Confusingly, Adam has the same abilities as Shazam and was granted his powers by the same ancient wizard, also named Shazam (Djimon Hounsou). And if that’s not enough “Shazam” for you, note that like Adam’s heroic counterpart, when he says “Shazam,” lightning strikes to bestow or remove his powers of flight, super-strength, and lightning blasts. But where Shazam alternates between an adolescent boy and a beefed-up man’s body, Adam returns to a slightly less buff version of himself when he doesn’t appear in superhuman mode. The big-screen movie arrives on the heels of Shazam! (2019), one of the better Warner Bros./DC titles because it destabilized superhero movie tropes with ironic humor. But Black Adam doesn’t have much to differentiate it besides its purported willingness to push the limits of its PG-13 rating—one of the reasons Johnson has been pining to play the character since the mid-2000s.

Much of Black Adam’s backstory is shared in voiceover by a tomb raider, Adrianna (Sarah Shahi), who is determined to find an ancient power that can help her home country, Kahndaq. Five thousand years ago, the power of six demons were contained in the crown of Kahndaq (the resident MacGuffin), forged by a power-hungry king to enslave the country. A young slave boy resolves to become a hero to ensure freedom for all. Empowered by the Counsel of Wizards, he became Teth Adam and stopped the evil king, but he disappeared immediately after. In modern times, Khandaq is once again oppressed, except now it’s by Intergang, a futurist band of imperialists with no clear political motivations. Adrianna seeks the crown to keep it away from Intergang, but when confronted, she releases Teth Adam from his magical prison. When he wakes up, Adam faces Intergang mercenaries and helicopters, all of which he dismembers and renders ashen with no more effort than to note, “Your magic is weak.” This might all seem gloriously badass, but Johnson’s character is devoid of a personality beyond his self-seriousness. It’s also never explained why he has a perfect American accent and speaks a language (English) that wouldn’t be invented until about 3,500 years after he disappeared. 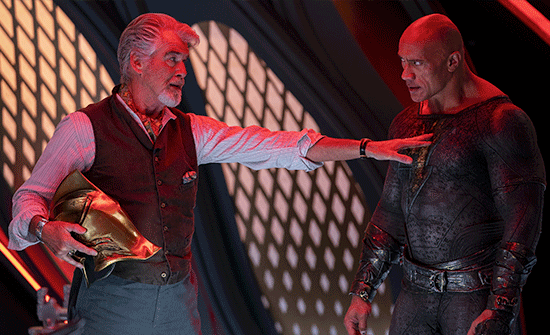 In any case, Adam’s arrival prompts Amanda Waller (Viola Davis) to enlist the Justice Society of America, a band of world police led by Hawkman (Aldis Hodge), a commanding presence who never receives a moment of backstory. He’s accompanied by the resident Dr. Strange, named Dr. Fate (Pierce Brosnan), who sees the future and tosses spells of light. Hawkman brings along two newbies to the team: There’s the wind-throwing Cyclone (Quintessa Swindell), who alludes to her origins in a vague reference to being kidnapped as a teen, in a concerning if unexplored allusion. And there’s also Atom Smasher (Noah Centineo), a sort-of-funny goofball with the power to embiggen himself, a talent inherited from his older uncle (Henry Winkler)—the similarities to Ant-Man are unmistakable. Alas, none of these characters have fleshed-out personalities or origins; they’re simply comic-book icons inhabiting roles in a hunk of intellectual property. Together, they take their souped-up jet—which emerges from beneath the grounds of an elaborate mansion à la the X-Men—and head to Kahndaq to confront Adam, a “Class-A Rogue Metahuman,” according to their scale.

The screenplay (credited to Adam Sztykiel, Rory Haines, and Sohrab Noshirvani) contains a few passing zingers about U.S. imperialism when Adrianna questions why the Justice Society suddenly cares about Kahndaq when, for years, they have ignored the threat of Intergang. But since these political dynamics are barely explored, the remarks have little weight. Instead, Adrianna and her teenage boy Amon (Bodhi Sabongui) plead with Adam to stop Intergang and become Kahndaq’s hero. Meanwhile, whatever attempts there are to give Adam personality arrive in relation to the skateboarding Amon, who tries to teach Adam how to brand himself as a superhero in several fish-out-of-water scenes that aren’t so much funny as barely smirk-worthy. Our only investment in Adam is through Amon’s belief in him. But matters become complicated when Hawkman reveals Adrianna’s version of Kahndaq’s history is a myth, and Adam isn’t the savior she thinks he is—rather, his rage nearly destroyed Kahndaq, hence his imprisonment.

Collet-Serra is a skilled filmmaker (see House of Wax or Orphan) who resorts to aping Zack Snyder’s visual style here. Slowing down the frame rate mid-battle? Check. Heroes striking an iconic pose? Check. Mood over character development? Check. And when in doubt, use a needle drop, such as the predictable inclusion of “Paint it Black” by the Rolling Stones. (Because his name is Black Adam, get it?) Along the way, the director tries to imbue the serious tone with some laughs, including a scene where Adam replicates the famous standoff scene from The Good, the Bad and the Ugly (1966), something he just witnessed on television. Lorne Balfe’s generic score accompanies the scattershot action, shot by cinematographer Lawrence Sher in yellow and brownish hues, along with copious amounts of unconvincing CGI. In particular, the climactic scenes, featuring Adam and the Justice Society teaming up against a demonic villain who looks like a cartoon devil, harken back to a period of early 2000s superhero cheese.

Black Adam contains little joy or wonder, just underdeveloped super-beings and a script obsessed with reminding us that Black Adam is not a conventional hero. The obvious theme of Adam’s status as hero or villain is painfully woven into the banal dialogue. “Kahndaq needed a hero,” Adam says in a moment cut for a trailer. “Instead, it got me.” Elsewhere, Hawkman seems quick to judge Adam as “no hero,” thinking in polarized terms of good and evil. But the movie questions which we should be rooting for, Adam or the imperialist Justice Society. Indeed, the movie constantly reminds us that if Adam’s a hero, he’s unconventional, as evidenced when he tosses goons over his shoulder to their death. But Adrianna suggests that the Kahndaq people “need to be free,” and Adam is the “true champion” to make that happen. This ongoing debate runs the theme into the ground until it becomes tedious. In the end, the line “I guess we’ll find out, won’t we?” hints that more of Black Adam will come, and the debate will continue, hopefully with more subtlety.

Unfortunately, Johnson’s talent is underused in Black Adam, playing a stone-faced character that robs the actor of his exceeding charm and reduces him to a blunt object with attitude. Adam’s eventual use of sarcasm and softened personality arrives far too late in the proceeding to win over the viewer. Johnson is best when he’s putting his knack for comedy to work, and the filmmakers seem more concerned with having Adam inhabit superhero poses than making the experience, you know, fun. Instead, Black Adam introduces too many new characters and doesn’t take the time to make us care about them. Hodge and Brosnan were well-cast and might have made worthy characters. But we’re left without a clear understanding of their powers or personalities (though, it was a pleasure to watch Brosnan walking around the Justice Society jet in an ascot and silk robe, spouting lines about potential futures). Generally, Black Adam feels underdeveloped, overstuffed, and clunkily executed—a disastrous result when the price tag is a reported $200 million. Here’s hoping that when Johnson’s character eventually meets Zachary Levi’s Shazam, the result has more personality.