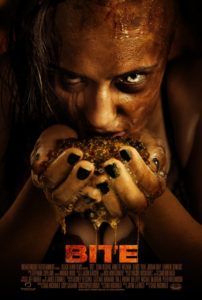 My favorite scene in Bite, director Chad Archibald’s gooey body-horror gross-out, is when Kirsten (Denise Yuen) stops by to visit her friend, Casey (Elma Begovic). Kirsten lets herself into Casey’s apartment, which she discovers is layered with slime, strange webbing, and freshly laid eggs growing who-knows-what. You see, over the course of several days, Casey has slowly been mutating into an insect-human hybrid, and her apartment has become a frightening scene. This also means Casey hasn’t been checking her smartphone. When Kirsten enters Casey’s newly formed nest, she’s less concerned about the amber-hued excretions on the walls or the sacks of eggs dripping off the dining room table. Kirsten wants to know why Casey hasn’t answered her texts.

It’s a laughable, stupid scene, and it illustrates how the filmmakers grossly misjudged this and other moments in Bite. Scenes like this are not exploited for the potential humor in Kirsten’s reaction and initial obliviousness to the horror she should be feeling. It’s played straight, and in fact, it’s never an issue that Kirsten, and several other victim-characters in Bite, enter Casey’s apartment often more concerned about whatever lame excuse the screenwriters have concocted for them to visit. Archibald conceived the story but Jayme Laforest penned the script, and very little about the scenario or characters makes logical sense or proves self-aware. Not that much in a movie about a woman who turns into a bug-thing should make sense, but somehow David Cronenberg made a masterpiece out of a similar scenario in his 1986 remake The Fly, so the concept of a logical transformation movie isn’t impossible.

The movie opens when Casey, set to marry Jared (Jordan Grey) in a couple weeks, flies down to Costa Rica with her friends Kirsten and Jill (Annette Wozniak) to celebrate her few remaining days as a bachelorette. There, a local talks of a nearby swimming hole most tourists aren’t aware of “with water so clear you’ll feel like you’re walking on the sky”. The girls get directions (their map consists of several arrows pointing upward; kudos to the prop manager for a minimum amount of work), and when they arrive, they seem enchanted by an average swimming-pool-sized grotto with mucky water. As the title suggests, something bites Casey. She doesn’t know what is was that bit her, because she can’t see more than a few inches deep in this supposed paradise spot. But the bite leaves a nasty mark and soon grows into an oozing boil.

The early vacation scenes are shot home-video style, shaky and hard to follow, while later on cinematographer Jeff Maher keeps the remainder lensed with well-lit, medium-shot distance. Back home, Casey regrets staying out with a Costa Rican local who bedded her, then stole her engagement ring and clothes. She might even be pregnant. After all, she feels nauseous and can’t keep food down. Meanwhile, Casey’s landlord-mother-in-law (Lawrene Denkers) applies cruel pressure for Casey to finalize plans for the wedding, which is in a week, but somehow Casey hasn’t chosen a dress or picked a caterer yet (a distractingly unrealistic detail for anyone in the audience who’s been married). Anyway, her future mother-in-law owns the building in which Casey and Jared both live—just a few doors down from one another in fact.

Before long, Casey begins to change as a result of her bite. She becomes a clicking, twitchy Brundlefly, but without the charismatic personality. She sleeps an entire night in the bath tub, under water no less; her skin forms a layer of slime; her boils get worse until her skin turns orange; her hair falls out; and after about ten minutes of screen time, she’s spitting acid and has a tail/stinger. The movie’s structure invites everyone mentioned so far in this review into Casey’s apartment on a one-on-one basis, at which point she kills them, turning them into food for her eggs—inside of which isn’t something monstrous, just a winged, wasp-sized insect. The winged nature of her “babies” begs us to question the biological life cycle of the organism, most specifically, we wonder what bit Casey in the first place, since it wasn’t a fly-like bug underwater in the non-grotto. But questions of logic have no place in this low-budget, low-ambition genre fare.

Bite is the kind of movie that wouldn’t exist if its characters didn’t make such terrible decisions. The filmmakers string together a bunch of random ideas they had, never stopping to consider if any of it made sense. When Casey’s oozing boil pops on Jared while they’re making love, that should have required a trip to the emergency room. In fact, you could make a drinking game out of Bite, requiring a shot for each instance a character should have called for emergency services but didn’t. Worse, Archibald hasn’t conceived even the thinnest layer of social commentary or cautionary warning for the proceedings. Given his obvious affinity for Cronenberg, you would think adding substance to his body-horror would be a creative obligation, but this is not so. His characters behave in nonsensical, unbelievable ways, often doing whatever it takes to find themselves in Casey’s apartment, where they become her prey. And while the practical and special FX used to create Casey’s monstrosity are often impressive, they’re the showcase for an otherwise dull and meaningless slime-fest that doesn’t feel the least bit inspired.