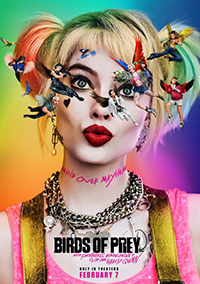 Birds of Prey, and the Fantabulous Emancipation of One Harley Quinn could only be better than its predecessor, the abortive Suicide Squad from 2016. Warner Bros. has been scrambling in the last few years since David Ayers’ scornworthy mess that appeased no one. They hired James Gunn to write and direct a new “reinvention” of the Suicide Squad brand, due in 2021. They also gave its star, Margot Robbie, another shot at Harley Quinn in this spin-off of a spin-off, complete with her own team, the Birds of Prey. A few degrees of separation away from their origins in Batman mythology, the all-female group of Gotham City antiheroes boasts a roster only comic enthusiasts will recognize, while Quinn remains appropriately center stage. After the character’s debut on Batman: The Animated Series in the 1990s as the Joker’s battered court jester and paramour, Quinn has since developed into a fan favorite, a charming and tragic figure in her on-again-off-again codependency with the Clown Prince of Crime, and her sometimes-renegade and feminist presence. Her first sort-of-solo feature has all the psychotic humor and candy-colored glee you would expect from a Harley Quinn movie, and it’s made all the more palatable by Robbie’s entertaining performance and the production’s self-consciousness as the latest female-centric entry in the superhero genre.

Warner’s post-Nolan DC Comics output has resulted in mostly disappointments and monumental misfires, save for their titles centered on women. In fact, the status of the DC Extended Universe as a continued franchise remains in question, since they’ve failed to manufacture the same synergy amid intellectual properties as their Marvel competition. Zack Snyder’s lifeless Man of Steel (2013) and Batman v Superman: Dawn of Justice (2016), followed by the doomed crossover Justice League (2017), hold less interest than their spin-off titles, and the studio has all but officially given up on additional Justice League crossovers while committing to solo projects—such as last year’s Joker or next year’s The Batman. But where the unbearable machoness of Suicide Squad and the CGI-heavy Aquaman (2018) threatened to render DC material obsolete, their stories about women remain the only worthwhile films in that universe, such as it is. Wonder Woman (2017) broke all sorts of box-office records for female superheroes and films directed by women (Patty Jenkins), supplying a long-awaited screen version of the iconic Amazonian. Birds of Prey might not give youngsters someone to aspire to, but it’s R-rated antics and themes of sisterhood have been capably delivered by director Cathy Yan.

In my review of Suicide Squad, I described Ayer’s use of Harley Quinn as “little more than a scantily clad sex object.” Prancing about the screen in leather panties and fishnet stockings, Quinn was seen grinding on stripper poles and serving as a creepy-sexy psychopath and doormat for the Joker. She needed some liberation, not only from her historically abusive loverboy—played by Jared Leto in the 2016 movie and, mercifully, altogether absent here—but from the reductive treatment by the testosterone-obsessed writer-director, Ayer. Robbie, doubtless using her post-Oscar clout after 2017’s I, Tonya, serves as a producer on Birds of Prey and seems to ensure a richer, less demeaning role for herself. Screenwriter Christina Hodson allows not only Quinn but the entire cast of female characters to stand up for themselves and each other, fighting against the men who objectify them, bully them, or take credit for their work. They’ve also got each other’s backs, whether it’s saving a friend with a well-timed bullet or offering a teammate a hair tie to keep her locks out of the way during a massive brawl. 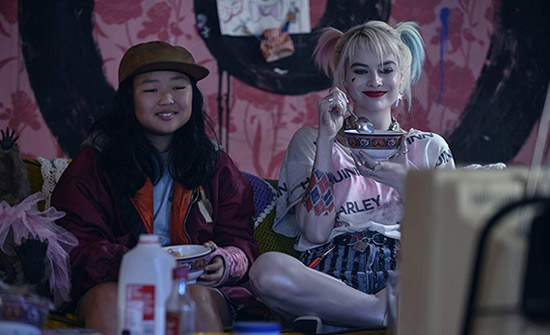 Although I haven’t seen Yan’s first feature, Dead Pigs from 2018, and therefore cannot draw any conclusions about the development of her aesthetic, she approaches Birds of Prey as if directing Spiceworld (1997) by way of Deadpool (2016). From the opening’s animated sequence that details Harley Quinn’s backstory as a psychologist with a Ph.D., who was wooed and corrupted by the Joker, to the zippy club scenes that show her wallowing in alcohol and joining a roller derby team after their off-screen breakup, Yan’s approach has a cartoonish and playful quality. Played by an unleashed Robbie, Quinn talks to and winks at the camera, telling her story with all the self-awareness of Bugs Bunny. She’s not necessarily an unreliable narrator, but she’s inconsistent, jumping around in time and delivering a story structure befitting a hyperactive 10-year-old who just finished a dozen Pixy Stix. This is most evident in the first half, as Quinn unravels the elaborate plot that brought the titular team together, complete with flashbacks, flashforwards, and random asides. The most delightful flourish, however, is Quinn’s relatable journey to acquire the perfect breakfast sandwich.

After blowing up the Acme Chemical Company where her clownish identity was formed, thus “publicly updating her relationship status” to Gotham’s underbelly, Quinn becomes the target of crime boss and general wacko Roman Sionis, aka Black Mask (Ewan McGregor, clearly having fun). She seems to attract the cuckoo type, as Sionis is little more than Joker by another name, in the same way that Tommy Lee Jones’ Two-Face in Batman Forever was simply Joker Lite. Sionis and his knifey henchman Victor Zsasz (Chris Messina) want a valuable mob diamond, the resident MacGuffin, and they agree to spare Quinn’s life so she can acquire it. Instead, she forms alliances with several other women, each with a beef against Sionis or Zsasz: There’s Black Canary (Jurnee Smollett-Bell), a singer in Sionis’ nightclub with a vocal prowess that can shatter eardrums; the Huntress (Mary Elizabeth Winstead), an awkward badass hell-bent on avenging her family with a crossbow; Renee Montoya (Rosie Perez), a Gotham detective tired of playing second-tier to a sausage fest of cops; and Cassandra Cain (Ella Jay Basco), a teenage pickpocket who lifted the diamond in question from Zsasz.

The proceedings may seem at times scattershot, but that’s the nature of the beast—the protagonist is, after all, a warped mind both aware of her own mental maladies yet unable to help herself. It’s a testament to Yan’s choice of cinematographer, the Darren Aronofsky and Spike Lee favorite Matthew Libatique, and the editing team that the movie is visually coherent. Touched with neon and fluorescent colors, there’s intentional chaos here, but it’s captured with cohesion best seen in the climactic battle in an abandoned funhouse (defunct toy factories and closed-down carnivals—the obvious nesting grounds for clown-based criminals). Alas, Yan bombards the viewer with a nonstop soundtrack. Sometimes her choices are inspired if pointed, such as Joan Jett’s “I Hate Myself for Loving You” or Heart’s “Barracuda,” but then we must also endure the grading audio of Ram Jam’s “Black Betty” and an unfortunate cover of “Hit Me with Your Best Shot” by Adona. Birds of Prey also features a brief dream sequence where Quinn performs “Diamonds Are a Girl’s Best Friend” in a double-reference to both Gentlemen Prefer Blondes (1949) and, in a meta stroke, McGregor’s performance in Moulin Rouge! (2001)—it might’ve been the most enchanting sequence in the movie if it weren’t chopped to bits before being altogether abandoned. 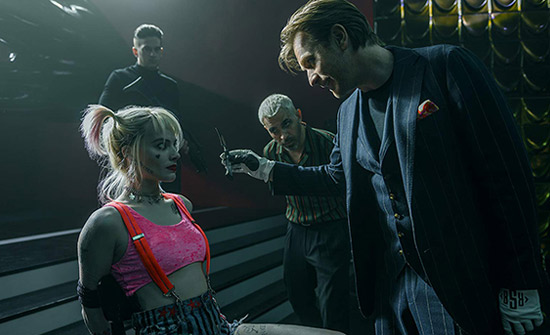 At least the production pulls no punches in regard its R-rated content, which is another downfall of the PG-13-rated Suicide Squad. Harley Quinn and her female cohorts are a foul-mouthed lot, from their generous use of “fuck” to their penchant for leg-breaking violence. After her breakup, Quinn resolves to get a pet, an adorable laughing hyena, and fends off unwanted advances from the creepy illegal animal dealer by feeding him to the beast. A long and silly fight sequence in a sprinkler-soaked jail ends when Quinn shoots a goon point-blank in the head. The finale is also excessively gory, shockingly so. The adult material isn’t necessarily a plus, but it’s good to see mild risks taken in the otherwise riskless superhero genre. It also allows Birds of Prey to explore several #MeToo undercurrents in their full seediness, as our heroes rally against their mistreatment by various men. Sionis is the worst of them—he enjoys humiliating women in his nightclub, and his lair’s walls are adorned with graphic bondage art (his literal black mask seems to be an extension of his taste for sexual violence). Moreover, both he and Zsasz get a kick out of tying up women and torturing them, a fate Quinn narrowly avoids.

Birds of Prey employs many of the same visual tricks as Suicide Squad, such as cartoony onscreen titles to introduce its characters, but Yan has more control over her film than Ayer did over his. Actually, she takes its over-the-top quality to fun extremes and manages to make even the wildest moments, where dozens of characters fight in cornucopia-colored spaces somehow watchable. Above all, it’s a joy to see Robbie do her thing, whether she’s dishing out a wonderfully choreographed scuffle or performing her lines with “poi-fect” delivery. And much like last year’s Hustlers, Yan showcases a cast of women without sexualizing them or turning them into ogle-worthy characters. Quinn is the inverse of other female superheroes—who are either scantily clad or gazed upon by the camera—in that she has a girlish, nonsexual quality (“It’s like a sleepover!” she says as the teammates arm-up to prepare for battle, “we should order pizza!”). She’s like the demented little sister the audience never had, and to that extent, she’s somehow endearing in all her madness.