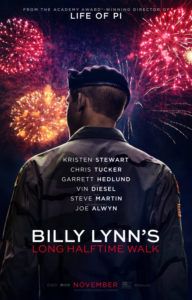 Ang Lee is an experimenter. Few directors test the formal limits of filmmaking as often as he does. Some of his experiments become rousing successes and innovative uses of the filmic medium, such as Life of Pi or Crouching Tiger, Hidden Dragon. Others, such as Hulk or Taking Woodstock, show a filmmaker willing to take technical or narrative risks, even as his choices limit his picture’s ability to connect with its audience. His best films are those probing dramas in which he considers a group of intimate characters from a specific point in time: Upper-class Connecticut families in the 1970s in The Ice Storm; Chinese spies during the Japanese occupation in Lust, Caution; or Sense and Sensibility, in which a group of sisters tries to find love despite their culture’s rigid class system. Whether any given Lee film belongs in the former category of an interesting failure or the latter of an intimate character study, his films are always fascinating and admirable.

And so, each new picture remains an event, even one as underwhelming as Billy Lynn’s Long Halftime Walk, which invokes a strong sense of technical experimentation onto his otherwise thoughtful dramatic structure. Based on the 2012 best-seller by Ben Fountain and adapted for the screen by Jean-Christophe Castelli, the story takes place over a single day in 2004 and follows the Bravo Squad, U.S. soldiers home from Iraq. Among them, fresh-faced Billy Lynn (Joe Alwyn), a 19-year-old from a small Texas town, has received notoriety for an act of heroism caught on video by a reporter’s camera. The present-day scenes involve Bravo Squad preparing to be honored during a Thanksgiving Day halftime special in Dallas. It has all been arranged by the soldiers’ agent (Chris Tucker), who’s trying to secure them a movie deal.

Much of the story involves flashbacks from Lynn’s perspective. He remembers the “worst day of his life” on the battlefield when his wartime mentor (Vin Diesel) died before him, and he was forced to take a life in hand-to-hand combat. He remembers returning home and talking to his sister (Kirsten Stewart, the best performance in this film), who questions U.S. motives in Iraq and wants her brother to leave the infantry given his obvious moments of PTSD. Meanwhile, the Cowboys’ detached billionaire owner (Steve Martin) tries to show his patriotism by including Bravo Squad in a disgusting halftime display of American exceptionalism, gaudy pop-music performers, and rampant jingoism. And through it all, Billy’s fellow soldiers support him, led by their rigid and coolly derisive Sgt. Dime (Garrett Hedlund).

To tell this story, Lee wanted to immerse his viewers in its authenticity. In an unprecedented choice, he and his cinematographer John Toll shot the picture in 3D using a high-frame-rate digital camera. Peter Jackson used a similar effect on The Hobbit: An Unexpected Journey, shooting in 48 frames-per-second (fps) instead of the traditional 24 fps. Lee shoots at a whopping 120 fps, which is meant to put more information on the screen by reducing the flicker between frames. Of course, we’re talking about digital cameras, so technically there are no “frames” in the sense of film stock; rather, we have the illusion of frames. And so, Lee hopes the additional frames will create an added veracity to his picture, even while some say the human eye cannot detect that level of visual information. The trouble is, most movie theaters are not equipped to present Billy Lynn’s Long Halftime Walk as intended; only a handful in the entire U.S. house the ultra-expensive projection equipment required to display the film in 120 fps. Meaning, most viewers will not see the film as it was meant to be seen (I am included on that list, as the film was presented in 24 fps in my screening).

One begins to wonder the point of shooting a film in a manner that the majority of your audience cannot see it. If fact, beyond most theaters not showing Billy Lynn’s Long Halftime Walk in 120 fps, many aren’t even offering 3D, as the film isn’t about superheroes and doesn’t have mass appeal. Nevertheless, given the intense lighting Toll used to accommodate his catch-every-detail cameras, the remaining film has an odd visual quality, like a home movie. Moreover, Lee asks his performers, who were forced to go without traditional makeup because the high-frame-rate cameras would show it in detail, to look directly into the camera for several scenes. Rather than confronting and thus engaging his audience with this tactic, Lee’s approach is awkward, and some of his actors (Alwyn, Tucker) can’t quite pull off the intended intimacy.

At the center of Billy Lynn’s Long Halftime Walk remains a somewhat engaging consideration of how different people view the idea of a soldier or war itself—some from the safe distance thousands of miles away, others from the front lines. Lee takes on every position, from Billy’s anti-war sister to a Cowboys cheerleader who’s more interested in the idea of dating a soldier than actually getting to know Billy. The film’s rather didactic, multi-perspective quality recalls Lions for Lambs in that sense. Along with Lee’s curious technical choice, the film overall has several distinct elements that never come together to form a satisfying whole. As Lee has learned in the past, an experiment doesn’t always work the way you want it to. Even so, we should be grateful that he keeps trying new things in alternative ways, as his willingness to test the medium’s technical limits sometimes results in something groundbreaking. Just not this time.