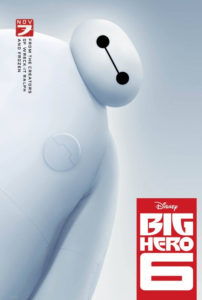 An amalgamation of cultures, the futuristic setting of San Fransokyo may stand out more than the entire storyline of Walt Disney Animation Studio’s adventure Big Hero 6. Based on a lesser-known Marvel Comic, the film’s central metropolis boasts a Golden Gate bridge with temple fans, cherry blossom trees lining its hilly streets, neon lights abound, and wind turbines floating above the fictional city. It’s a wondrous fusion of East-meets-West. Co-directors Don Hall (Winnie the Pooh) and Chris Williams (Bolt) imbue every frame with some fascinating background detail to keep our eyes occupied. And after being outshined by the adorable animated short Feast—a dog’s-eye-view tale about a pup whose love for food is only outmatched by his affection for his master—that precedes it, Disney’s first animated Marvel property feels perhaps too familiar and only-just-serviceable in its storytelling.

Nevertheless, there’s plenty to enjoy in this tale of superhero robotics. The story opens on 14-year-old Hiro Hamada (voice of Ryan Potter), a robotics prodigy who wastes his talent on mini-robot fights. The whiz kid’s elder brother Tadashi (Daniel Henney) convinces him to join his robotics school, but to join Hiro must impress the school’s head, Professor Robert Callaghan (James Cromwell). And when Hiro demonstrates his new invention, a mind-controlled microbot comparable to nanotechnology, he’s welcomed to join. But at his presentation, a devastating fire takes not only his microbots but Tadashi’s life. Fortunately, the three credited screenwriters deal with the subject of Tadashi’s death in such a way that children in the audience will come out without emotional scars. And after Tadashi’s death, Hiro finds his late brother’s balloon-like medical-bot creation, Baymax (Scott Adsit), to assist with the grieving process.

Physically bulbous awkward and slow, Baymax’s personality reminds us of the android Data in early episodes of Star Trek: The Next Generation, where his emotional understanding requires development and lots of explanations to get through basic tasks. It’s a common but effective dynamic. But Baymax’s flat voice, robotic responses, and inflatable presence often produce ironic and physical humor. Elsewhere, a dark figure in a kabuki mask has somehow taken control of Hiro’s microbots and has some dastardly plans. Hiro suspects the villain killed Tadashi and stole his microbots, so he wants vengeance. After upgrading Baymax with armor and karate skills to make him a formidable superhero, Hiro enlists Tadashi’s friends for help. Each uses their science know-how to turn themselves into a superhero: wheel bound Go Go Tomago (Jamie Chung); laser-armed goof Wasabi (Damon Wayans Jr.); chemistry airhead Honey Lemon (Genesis Rodriguez); and stoner-like, dragon-obsessed fanboy Fred (T.J.Miller).

To be sure, Disney has tapped into their Marvel properties in more ways than just adapting the comic source material. The discovery section of the plot cannot help but resemble Tony Stark figuring out his robotic suit of armor in the first Iron Man, nor can the eventual formation of the “Big Hero 6” team and their struggle with teamwork help but recall The Avengers. It’s the interactions between Hiro and the lovable Baymax that make us laugh and pull at the heartstrings, however. One hilarious sequence features the robot with a low battery, which causes him to act drunk. Other adult-centric moments of humor arise as well. And yet, the script is brought down by all-too-common lines like “I know, right?” and “You got this” that are the dullest form of communication in today’s slang. Moreover, rampant predictability sours the plotting. When, early in the film, it’s explained that to shut down the medical-bot Baymax, Hiro must say, “I’m satisfied with my care,” you just know there will be a teary moment in the climax where Hiro will be forced to repeat that line.

Despite common threads running through Big Hero 6, the city of San Fransokyo remains enthralling and the story diverting enough for disposable entertainment. After The Incredibles and a dozen live-action Avengers-verse movies though, the film can hardly compare. The animation looks sharp, with character designs more cartoony and somewhat generic to reflect the comic book origins. But the busy environments of San Fransokyo are where the audience will lose themselves in the images. The filmmakers employ them to excellent effect in a number of fast-paced chase sequences that showcase a diverse array of surroundings. Still, the film’s cultural mashup and accessible story are bound to create a huge worldwide hit for Disney, and why not? It’s enjoyable and, ultimately, harmless in an affectionate way that both younger audiences and their parents will appreciate.