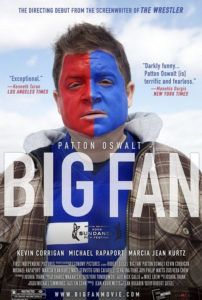 Paul Aufiero loves the New York Giants. Without his football team, he doesn’t amount to much. He’s portly and middle-aged, and he lives at home with his mother. She yells at Paul for calling into his favorite sports talk radio station under the name “Paul from Staten Island” in the middle of the night. He works the night shift as a parking garage attendant and spends his works hours toiling over his laboriously preconceived rebuttals to his talk radio call-in enemy, an Eagles fan named “Philadelphia Phil”. But when he makes those calls, Paul feels alive for a minute of airtime.

Robert Siegel, writer of The Wrestler, makes his directorial debut with Big Fan, an indie movie and character study about the most overblown level of sports fandom. Though the structure seems to represent a drama, hidden inside Siegel’s movie is a comedy—a very, very dark comedy. In fact, you may not even realize the movie is trying to be funny until the finale. Despite this tonal elusiveness, the presence of stand-up comedian Patton Oswalt as Paul suggests that the movie isn’t merely a psychological drama about an obsessive sports enthusiast. While Oswalt, who’s amazing here, joins the growing list of comedians who are trying their hand at dramatic roles, his performance is carefully designed for the audience to laugh at how (shockingly) infatuated his character really is, in the end taking it to absurdist degrees.

For example, Paul and his only friend Sal (Kevin Corrigan) tailgate during the Giants’ games, watching from the parking lot on a small television, knowing that their presence in the parking lot means certain victory for their team. One evening, Paul and Sal notice their idol, the Giants’ top defensive star Quantrell Bishop (Jonathan Hamm), filling up at a gas station. They decide to follow him into Manhattan into a strip joint; eventually, they muster enough courage to greet the player. But when Paul lets it slip that they’ve been following Bishop all night, the player unloads a beating on Paul and puts him in the hospital. Bishop is suspended pending the investigation, and Paul’s favorite team is left without their star linebacker dangerously close to playoffs.

The central question of Big Fan is what happens to someone when they’re betrayed by their hero? Most of us would find a new hero. Not Paul. He resolves to claim amnesia, even if it troubles him so. Paul’s sleazy lawyer brother wants to sue Bishop for millions, but Paul refuses, not wanting to harm the integrity of the player nor negatively influence the outcome of future games. For Paul, being a fan is his entire existence; it’s self-sacrificial. Much of the movie is spent with Paul realizing this truth though several long sequences where we do nothing but watch Oswalt walk down the road pensively, or ride the bus pensively, or sit in his room pensively. Introspection only works in movies to a point, and then it becomes boring.

Slowly, Paul’s world is challenged. He has confrontations with his family, where ultimately he chooses the Giants over them. He loses everything for the sake of his fandom. But somehow, it doesn’t feel like he loses enough. The audience never feels as though Paul has sacrificed anything, because Siegel makes it so abundantly clear early that Paul despises his family. If only Siegel would have made better use of Sal. Paul brags to Sal that his on-air monologues just come to him, and Sal envies him, wishing he could rant like that. It would have been interesting, since we’re watching Paul crumble anyway, to see what Sal would’ve done if he found out about Paul writing his speeches in advance. Alas, Sal and Paul remain ever-stable friends—their only argument concerns root beer.

We can imagine that people like Paul exist out there, so that aspect of the story seems believable. There are, however, some common sense issues that make the story hard to believe: The police say that there were no witnesses against Bishop, so they need Paul’s testimony, otherwise charges will be dropped. Though Paul says he doesn’t remember what happened, the movie never acknowledges Sal’s presence at the night club. Did the police talk to him? Is he covering up too? The point is never addressed, as though Sal was never there, except he was, and the movie never explains how he avoided giving his eyewitness account. This is very distracting—a major plot hole. A number of head-scratching points of logic like this arise, but by the ending, we realize the whole movie was a setup to purvey an elaborate practical joke.

Without describing what happens at the climax, let’s just say that Siegel manipulates our familiarity with character studies about obsessive people. We’re so used to seeing these indie movies about a loner who loses it and decides to resolve his issues with a gun that the ending of Big Fan feels like a parody, albeit a welcomed, riotous one. Still, the surprising finale doesn’t make up for the holes in the plot, or the brief runtime (88-minutes) that wraps up leaving missed opportunities. For the duration, though, Siegel’s film is surprisingly non-judgmental, presenting the character as he exists. Throughout the first two-thirds of the movie, Paul’s fandom digs him into a hole, but he doesn’t learn anything from it. Strangely, that’s the truest part of the movie. Big fans like Paul are dedicated no matter the circumstances, whether their teams are winning or not, and their resolve is scarily unshakable.