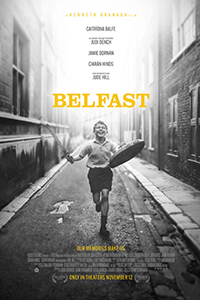 In Belfast, Kenneth Branagh remembers his childhood with a distinctly cinematic brand of romanticism. The film nostalgically conveys the setting—the capital city of Northern Ireland in 1969—in rich, expressive black-and-white photography. The semi-autobiographical story, written and directed by Branagh, frames the city as an idyllic place beset by The Troubles. Charming newcomer Jude Hill plays Branagh under the name Buddy. The 9-year-old looks up to his father, minds his mother, listens to his grandparents, goes to school, watches Star Trek on TV, visits the cinema with his family, and even falls in love. His family struggles with debt, health issues, and pressure from Protestant forces to pick a side in their escalating conflict with the Catholics. Despite these tensions, the film never approaches anything resembling a strident social drama. Instead, Belfast is effortless and pleasantly presented, almost to the point of neutralizing conflict. It’s all in service of Branagh reminiscing from a child’s perspective.

The first scenes show Buddy in all his innocence, playing knights in the street with other children. Then Protestant militants invade his world—a working-class neighborhood lined with attached houses—by smashing windows, throwing Molotov cocktails, and calling for Catholics to leave. Caught in the chaos, Buddy is rescued by his Ma (Caitríona Balfe), who runs their Protestant family, while his Pa (Jamie Dornan) is away for long stretches at work. However severe the situation may seem, Buddy’s mind soon transitions to other concerns—such as seeing Raquel Welch in One Million Years B.C. (1966) in full color alongside his family. Buddy also studies to advance his seat in class next to his crush, the smartest girl in his class. But in no uncertain terms, Branagh identifies this as a period of transition. When Buddy goes to church on Sunday, the sweaty minister (Turlough Convery) bellows about “the fork in the road” and asks, “Which way will you take?” Will Pa join the Protestant gangs or defy them? Will their family remain in Belfast or follow Pa to a new job opportunity in London?

While these concerns loom over Belfast, Branagh captures the rhythms of a child’s life all too well, making the proceedings feel repetitious. Buddy plays in the neighborhood, attends school, or visits his grandparents (Judi Dench, Ciarán Hinds), who have been written with character to spare. He spies from around the corner his parents arguing in the kitchen about their bills, watches Westerns such as The Man Who Shot Liberty Valance (1962) on TV, and gets roped into stealing from a sweetshop to join a gang. It’s all presented with sweetness, warmth, and the episodic structure of individual memories or pages in a photo album. Belfast native Van Morrison supplies most of the songs on the soundtrack, and the familiar, pleasant sound renders everything saccharine. Even the final conflict between Pa and the Protestant gang leader (Colin Morgan) is modeled after High Noon (1952), robbing the sequence of any real sense of danger. Belfast feels like a film made from a place of hindsight by Branagh to recall events from a child’s point of view, not convey history. In doing so, Branagh reduces The Troubles to a conflict in which Protestants take action to rid their town of Catholics, leaving out the more significant political and national issues at stake—but fittingly so, as a child wouldn’t understand them anyway.

Undoubtedly, Belfast is Branagh’s most personal statement on film. After making a name for himself as an actor in some of the UK’s most prestigious theater productions, his directing career started with several impressive Shakespeare adaptations, including Henry V (1989) and his masterful Hamlet (1996). But in the last decade or more, his output has consisted of big studio productions like Thor (2011) or Murder on the Orient Express (2017), occasionally interrupted by more personal projects such as All Is True (2018), where Branagh played an aging Shakespeare. Here, he romanticizes his former home with a deeply felt affection, starting with the first images that show modern-day Belfast in a gorgeous color montage before transitioning to monochrome. Throughout the film, Branagh injects notes of color into cinematographer Haris Zambarloukos’ stunning black-and-white images, often to denote moments where young Buddy feels inspired by art. For example, when Buddy sees A Christmas Carol on stage or Chitty Chitty Bang Bang (1968) in the cinema, they burst with color, lighting up Buddy’s face. Branagh’s enduring sense of wonder over the medium is infectious.

Branagh’s family left the city when he was nine years old, and it’s evident he holds those memories dear. As coming-of-age dramas go, Belfast proves almost too sentimental at times, especially given the implications of The Troubles on the next few decades of Irish history. But true to the film’s childlike perspective, Branagh doesn’t need us to understand the tumultuous events unfolding in the background. Using wide-angle lenses and sequences staged like a musical or Western, he convincingly renders Buddy’s imagination and experiences, even if occasional scenes that don’t involve Buddy betray the central conceit. Beyond the personal reminiscing, Belfast also contains a universal message about tolerance and acceptance. Pa’s desire to resist taking sides in a conflict and respect everyone’s beliefs becomes a decision that shapes Buddy’s life. Branagh’s film touchingly shows how grateful he remains for his family’s humanity and the city that fostered his imagination.