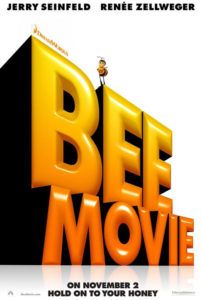 Crud Shoveler doesn’t sound like the most favorable occupation, especially if accepting such a job means you’re resigned to shoveling crud for the rest of your life. Imagine shoveling crud every day until you die and knowing that that was your fate only a couple days into maturity. Even if you weren’t shoveling crud per se, any uninteresting job like Honey Stirrer could apply; committing to said undesirable employment signifies the end. That’s the dilemma of Barry B. Benson, voiced by Jerry Sienfeld, in Bee Movie. Does he concede to being a worker bee, assigned to any number of jobs such as Crud Shoveler for his entire life, or does he go out and explore the world?

Barry, a lowly worker bee, slips off with a group of high-flying pollinators. He follows them into New York City, escaping the confines of the hive. His sense of freedom is overwhelming. So I suppose it makes sense that one way or another he befriends a human woman, Vanessa (voiced by Renee Zellweger). If you’re going to explore, why not explore the boundaries of which two creatures can relate to one another? Bees can speak, you understand, only it’s one of their laws that they never speak to humans. But Barry is fascinated by Vanessa, and she by him, so law schmaw. We watch has they talk over a cup coffee, sharing a piece of rum cake (in Barry’s case, a crumb), which for him is heaven. If only they were more biologically correct for each other.

After getting a view of the bigger picture of human-bee relations, namely how humans force bees into labor and steal their honey, Vanessa, Barry, and his bee-friend Adam (voiced by Matthew Broderick) bring a lawsuit against the human race. Defending the human interests is Layton T. Montgomery, voiced by John Goodman channeling a chubbier version of Foghorn Leghorn. His argument is that should humanity accept responsibility for stealing honey, we’d have to accept accountability for every other pillage of nature from a society of living creatures. Presiding over the case is Judge Bumbleton (Oprah Winfrey), whose verdict shouldn’t come as too much of a surprise, given her character’s name.

Like most animated features, Bee Movie relies on an unhealthy dose of celebrity voicework. The musician Sting makes an appearance in court for using his bee-derived name illegally. The sometimes crazy Ray Liotta is forced to answer for his own line of honey products. Most notable is Patrick Warburton, better known as Elaine’s on-and-off boytoy David Puddy from “Seinfeld”; fans of the animated show “Family Guy” will recognize the over-the-top voice as Peter Griffin’s wheelchair-bound neighbor Joe. He’s done voicework in a number of animated features like Open Season and Chicken Little. Here, Warburton plays Vanessa’s jealous boyfriend Ken, whose disbelief in bee society’s rights could have provided a much-needed skeptic, but instead drives us bonkers with his strained shouting.

Seinfeld himself, along with other writers, some from “Seinfeld” fame, create a refreshingly adult-appealing story, filled with surprising race and lawyer humor. Fans of the comedian’s work will be in bliss and be able to look past the film’s sometimes formula relationships. Always present is his brand of observational humor, only imbibed with more imagination when applied to the created bee world.

I doubt there was any way Seinfeld’s team of writers could have planned for this when writing years ago, but embedded into the subtext is an allusion to Colony Collapse Disorder, the plague currently affecting Western bee colonies in North America since 2006. Bee Movie started production and likely had a script long before the bee disappearances had begun (computer-animated movies typically take years to produce), but as is, we certainly realize the effects of a beeless world within the movie. When one part of an ecosystem disappears, we see how others disappear as a result. The coincidental message makes the movie better than it should be.

The Bug World has been almost entirely covered in the last decade of computer-animated movies. Ants (doubly), grasshoppers, spiders, and now bees have all been given worlds that compare somehow to our own. Fully realized societies bloom from out of the ground, personifying insects/arachnids, or any other species in the animal kingdom, with undoubtedly human stories. A Bug’s Life used Seven Samurai’s model, so cleverly so that Kurosawa’s film didn’t even get the courteous “inspired by” credit. And since I’m comparing insect cartoons to live-action masterpieces, Bee Movie is sort of like Terry Gilliam’s Brazil, in that the pursuit of dreams amidst bureaucracy leads to the realization that dreams can sometimes be dangerous.