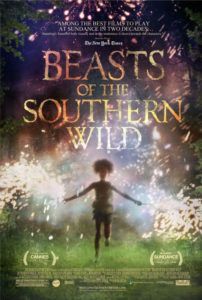 With strains of both independent filmmaking and commercial sensibilities pulsing through it, Beasts of the Southern Wild has become 2012’s indie darling. This first feature-length effort from director Benh Zeitlin made waves on the festival circuit, first at Sundance, then at Cannes, where it earned the Caméra d’Or, the award for the best first feature. Along with a number of Oscar nominations—including Best Picture, Best Director, and Best Actress—the film’s renown has created a wellspring of affection from critics and audiences. Indeed, if this film is anything, it’s a crowd-pleaser, despite its unlikely subject matter and often challenging depiction of life for one child. Based on the prologue, we might mistake Zeitlin’s approach as being relative to Terrence Malick, specifically his Days of Heaven (1978) or The Tree of Life (2011), but the young director makes a number of overwrought choices that relegate his film into, at times, dramatically overbearing circumstances.

Part fantasy, part realism, the film is told from the perspective a 6-year-old girl. Hushpuppy (Quvenzhané Wallis) lives with her father, Wink (Dwight Henry), in the “Bathtub”, a Louisiana marshland cornered off from civilization by a nearby levee. Hushpuppy is told her mother “swam away”, meaning she’s either dead or left Wink. The Bathtub’s isolated community lives a vagrant lifestyle in ramshackle abodes propped up by stilts because of frequent flooding. Wink’s only method of travel is a pick-up truck’s rear carriage mounted on a few oil drums. Far away from the plasticized ways of modernity, these people savor the wild outdoors, celebrating nature less like naturalists and more like a bunch of good-ole-boys on a permanent camping trip. They light fireworks and imbibe copious amounts of booze, and they survive on a steady diet of crab, crawfish, and the occasional alligator. They’re not scientists or even particularly bright; they’re not surviving ‘by the Earth’ or by adhering to some established philosophy. Their severe need for independence is almost certainly fanatical, but they’re free.

Much of the film settles on the relationship between Hushpuppy and Wink, the tale told with much intimacy through Hushpuppy’s narration and cinematographer Ben Richardson’s unsteady, peering handheld camera. Hardly suited for child-raising, Wink’s tough love approach isn’t above reckless bouts of drunkenness and the occasional slap. But after a Katrina-like storm floods their area with deathly salt-water and kills the lush surrounding flora and fauna, Wink’s parenting becomes even more desperate, not only because Hushpuppy must learn to fend for herself in her harsh surroundings, but because he’s dying of an aggressive blood disease. Regardless of Wink’s outward abrasiveness—rarely is he not shouting through moments of both elation and anger—his daughter is devoted to him. Even when officials come to enforce a mandatory evacuation of the area and bring the Bathtub’s residents to a shelter for clean water and medical care, Hushpuppy’s band of ragamuffins join together and escape. Her devotion is endearing and contagious, as soon we too begin to feel that the Bathtub is home and Wink is a loving father.

At the same time, Zeitlin, working from the play Juicy and Delicious by Zeitlin’s co-writer Lucy Alibar, incorporates an element of fantasy as Hushpuppy dreams of Aurochs, an extinct Ice Age species of giant man-eating hogs with horns. Hushpuppy’s great fear is of being washed away by the rising sea level as the ice caps melt. Zeitlin cuts away to melting glaciers collapsing into the sea, and in these glacial chunks are Aurochs who, now free, make their way toward her to destroy her family. Rendered with better CGI than expected for a film with a reported $2 million budget, these creatures finally reach Hushpuppy for a stand-off and call into question how much of their presence was only in Hushpuppy’s imagination. But such grand symbols lead to equally grand melodramatics. Zeitlin is not a subtle dramatist, nor do his contributions to the film’s score bear the mark of subtlety. Zeitlin and Dan Romer co-compose a booming score that’s meant to enlarge these small circumstances into a mythical story, which it does, but it also reminds the audience how to feel in moments where a little restraint might have benefitted the film’s rather straightforward emotional experience. The same could be said for Hushpuppy’s narration, which puts perhaps too fine a point on how we should feel toward her world.

A curious blend of David Gordon Green’s George Washington (2000) and Terry Gilliam’s Tideland (2005), there’s an affecting center here that will impact most audiences, quibbles about the inconsistent direction notwithstanding. Along with the film’s indie production airs, Zeitlin adopts Malick-esque impressionistic and lyrical style, that choice being incompatible with his own overt dramatic emphasis. Still, Zeitlin made a remarkable find in Quvenzhané Wallis, the young actress whose raw performance shows an emotional depth beyond her age. She contains all the innocence, rage, loss, and curiosity of her complicated character, which seems almost impossible to conceive for an actress her age. Nevertheless, there she is, giving us a performance that never once feels like a performance—an exceptional notion for a child actor. Overall, Beasts of the Southern Wild contains undeniable vision and ambition, even if the emotional clarity feels perhaps too certain for a child in the abstract world on display.