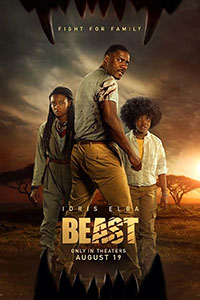 Nothing good comes from humans meddling with Nature. Venture into unexplored regions of a national forest, and you end up facing down the killer bear from Grizzly (1976). Dump hormones into the sewers, and you’ll have the colossal reptile from Alligator (1980) on your hands. Feed a random crocodile from your shoreline, and you’ll end up with the maneater from Lake Placid (1999). Genetically engineer dinosaurs for a theme park, and we all know how that ends. In most cases, Nature doesn’t like humanity, and in movies, animals tend to respond with jaws and claws when people try to conquer, exploit, or even trespass into the wild. Such is the case with Beast, a killer lion movie that, from a certain point of view, depicts humans getting what they deserve for messing with animals. More fundamentally, it supplies 90 minutes of Idris Elba defending his two daughters in the South African bush. That alone is worth the price of admission. It only helps that director Baltasar Kormákur delivers a visually immersive and fast-paced thriller that will cause audiences to jolt and scream.

Ryan Engle’s screenplay, based on an idea by producer Jaime Primak Sullivan, begins with a group of poachers who gun down an entire pride of lions, except a single male. “He’s a big one,” a poacher remarks. “We better get him… He’ll come after us.” Next to wealthy fatcats like the Trump offspring who pay beaucoup bucks to have guides wrangle big game for an easy kill and a pathetic photo op, poachers are the lowest of the low. So when the vengeful male lion eviscerates the poachers in the first scenes, I was in the lion’s corner, hoping he might target a particular Minnesota dental professional next. But alas, the lion kills indiscriminately, including an entire village of locals. Although the movie doesn’t lionize (get it?) the titular cat, it at least acknowledges that human behavior prompts Nature to respond in unnatural ways. As the body count rises, the situation recalls horror movies like Carrie (1976) or Terror Train (1980), where the killing is a response to human cruelty.

Enter Dr. Nate Samuels (Elba) and his daughters, the angsty teen Meredith (Iyana Halley) and the younger Norah (Leah Sava Jeffries). After the death of the children’s mother, Nate’s estranged wife, the three arrive in South Africa, the original home of their late loved one. They meet up with a family friend, Martin (Sharlto Copley), who describes himself as an “enforcer” for a wildlife reserve—otherwise known as an “anti-poacher” who targets those illegally slaughtering animals for the black market. An absent father full of regrets, Nate uses the trip to reassert his bond with “Mer” and Norah. Still, his efforts prove mostly transparent until Martin escorts them on a private safari that takes a sudden turn into nightmarish territory. While stopping at a small village to investigate if anyone knows about poachers in the area, they discover everyone slaughtered, likely by the rogue lion now determined to kill any human in his path. In due time, the lion attacks Martin, while Nate and his girls find themselves stranded in a stalled truck, fending for their lives.

Engle’s treatment of Beast’s familiar scenario contains predictable character beats and a resolution that will surprise no one. Inevitably, the dire circumstances allow Mer to voice her grievances with her father, while Norah proves she’s more than a little kid. By protecting his family, Nate demonstrates that, even though he wasn’t there when their mother was dying, he’ll be there for his children now and in the future. Unfortunately, dreams of his late wife also plague Nate—haunting, wispy visions that feel somewhat out of place in this otherwise tense movie. And one dream-within-a-dream-within-a-dream sequence perhaps strains credibility and the audience’s patience. But the character dynamics supply merely the connective tissue to this muscular chunk of Man vs. Nature—a survival story reminiscent of The Grey (2011). Except, unlike that film, it doesn’t cut away when it comes time for fisticuffs between our hero and the killer animal. What the movie doesn’t have is much to say about the poaching underworld, beyond portraying them as faceless bad guys against whom the lion is “fighting back,” according to Martin.

Nevertheless, Beast excels because of Kormákur’s ability to build tension through immersive camerawork, captured on location in South Africa. Aside from the aforementioned dream sequences that break the momentum, it’s the kind of movie that breezes by, leaving the viewer exhausted but relieved by the finale. The real star is veteran cinematographer Philippe Rousselot, whose nimble Steadicam follows the action in a series of digitally connected shots. Whole scenes unfold with the illusion of an unbroken take, placing the viewer amid Nate’s familial troubles and panicked interactions with the lion. Of course, the production renders the animal in question using CGI, sometimes convincing, sometimes less so. The creature’s appearance reminds us that we’re watching basic animal revolt fare, and with those expectations in mind, it’s a convincing enough effect given the reported budget of $35 million.

Kormákur knows what kind of movie he’s making. He’s well-versed in perilous survival stories, ranging from Everest (2015) to Adrift (2018). And his self-awareness becomes apparent early in the proceedings when Mer appears in a Jurassic Park (1993) tank top—because later, the director clearly models attack scenes after the close-quarters velociraptor sequences. Even the climax has a similar resolution to Spielberg’s film. However, Beast stops short of offering any thoughtful remarks on the impact of humans encroaching on animals’ territory; instead, it resolves to be your standard so-called natural horror yarn. On those terms, Elba, Kopley, and the entire cast commit to their roles, credibly selling an experience loaded with a few effective jump-scares and tension throughout. If the themes and character arcs prove obvious, Beast is a just-plain-fun viewing for those who enjoy this sort of “when animals attack” brand of B-movie.