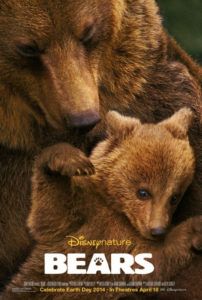 What started as a noble reinvigoration of Walt Disney’s two-reel travelogues called True-Life Adventures, the feature-length documentaries released under the Disneynature label have given up any hope of providing audiences with an educational experience. From the thoughtfully narrated and visually awe-inspiring spectacles that were Earth (2009) and Oceans (2010), to the borderline contemptible anthropomorphisms present in African Cats (2011) and Chimpazee (2012), Disneynature’s pictures have devolved from documentaries into cutesy arguments for how animals are like people. However well-intentioned and supportive of various wildlife preservation associations these productions may be, the G-Rated docs are more interested in producing awww responses from little kids than teaching them about nature.

Take Disneynature’s latest “true life adventure” called Bears, directed by Alastair Fothergill and Keith Scholey, who also partnered on African Cats. The film looks gorgeous, having been shot in the Katmai National Park on Alaska’s southern peninsula. Time-lapse footage of incoming tides, magnificent vistas showcasing snowy mountains, and colorful shots of blooming meadows all stand out as glorious and memorable images. But like its predecessors, the “story” told in Bears is that of a parent-child relationship of survival, filled from start to finish with adorable and vulnerable cubs protected by their caring mother, and seemingly designed to relate almost exclusively to young children in the audience. John C. Reilly, whose voice is naturally goofy and likable, narrates and lends a kind of clumsy affability to these burly, intelligent creatures.

In typical Disneynature fashion, all animal characters must be given names. Central is a family of Alaskan brown bears, the mother named “Sky” and her two cubs named “Amber” and “Scout”. Following the first year of the cubs’ life, we see Sky and her babies travel down a mountain after a long winter. She struggles to find food and defend her offspring from predators and competition, and the filmmakers have given her journey a mystic quality by suggesting she’s guided to the salmon spawning pools upriver by a cawing raven. Meanwhile, two quarreling males, the dominant Magnus and roguish Chinook, make attempts at Sky’s cubs, as does a mischievous white wolf named Tikaani. Despite violent head-to-head battles between Magnus and Chinook, there’s nothing very gory showcased, aside from some bloody salmon chomping. But the environmental perils are many, such as a sequence where Scout falls asleep on an inlet in the middle of a river just before a rising tide.

Beyond his descriptions, Reilly’s voiceover adds unfunny and unnecessary comic asides, and in doing so over-punctuates the obvious. The images alone, supported by George Fenton’s score, have plenty of drama, while the cuteness of the cubs and the vitality of their bond to Sky are apparent without Reilly’s incessant commentary, penned by two credited writers. When my wife and I saw the film, a father and his 4-year-old (or thereabouts) daughter were seated behind us, and the girl’s charmingly innocent, loudly whispered commentary throughout Bears kept us amused. One scene featured several bears yawning sleepily after a meal. The girl said, “Daddy, that looks like you in the morning!” The very next moment, Reilly chimed in and said, “This guy looks like my dad trying to watch TV.” The point is, the little girl was able to make this association without Reilly’s narration punctuating it.

Children will remain unaffected by the films’ concerning lack of scientific fact or educational purpose; rather, they’ll be swept up by 78 minutes of beautiful wildlife photography. And fortunately, as with all Disneynature productions, a percentage of the opening week’s box office goes to a worthy cause (in this case, the National Parks Foundation), making it a difficult prospect to avoid. But if Disneynature continues on this path of editing nature into the narrative through abominable narration and conspicuous editing, one can foresee a future project eliminating narration altogether and instead occupying a talking-animal tale—something more akin to Homeward Bound: The Incredible Journey (1993) or Cats & Dogs (2001). In its current state, Bears only just qualifies as a documentary and leaves us wanting to revisit Werner Herzog’s Grizzy Man for an unflinching look at the dangerous beauty of bears.