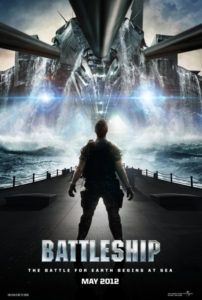 A big dumb expensive hunk of excess, Battleship stands for everything tedious and overblown about Hollywood and its penchant for brainless popcorn-munching summer entertainment. Based on Hasbro’s board game—a one-note source if there ever was one—the movie borrows heavily from another Hasbro property-turned-blockbuster, Transformers, in terms of both subject and execution. Like that film, we follow uninteresting human characters as they somehow get the better of technically advanced mecha-aliens. This plot will leave players of the original Navy-centric game (which could have inspired an interesting The Hunt for Red October-esque yarn) scratching their heads. Why aliens, you might ask? Because, that’s why. Don’t be surprised if Hasbro’s proposed Monopoly movie features time travel, alternate realities, and a city-destroying lizard. Why wouldn’t it?

To ready himself for this $200 million-budgeted Universal production, director Peter Berg (Hancock) attended and graduated with honors from the Michael Bay School of Filmmaking. He imitates Bay’s approach a little too perfectly, leading one to suspect he obtained Bay’s answer book before the final exam. Berg pilfers from Bay’s robot-clashing Transformers trilogy and even his maligned WWII dud Pearl Harbor. And in addition to his degree in Bay-isms, Berg must’ve also double-majored in The “Art” of Roland Emmerich, as there’s an alarming level of influence taken from Independence Day here. And let’s not forget Berg’s seminars in James Cameron’s Titanic and J.J. Abrams’ revamp of Star Trek either. The movie adopts an epic style with grandiose imagery and scope, and it employs uncharacteristically smooth camerawork. But any hope for visual clarity is lost when Berg’s vast frames are diced and strung together nonsensically in staccato editing. A student of Bay and Emmerich, indeed.

Erich and Jon Hoeber, writers of Whiteout and Red, devised a story recalling Atomic Age alien-invasion fare where extraterrestrials land and the U.S. military responds with immediate distrust and aggression. Granted, the humans here shouldn’t trust the hostile visitors, but the movie doesn’t even entertain the notion that these aliens could be the friendly type. One character compares them to Christopher Columbus and humanity to “Indians.” In 2006, scientists sent out a signal to a planet capable of supporting life, and six years later, aliens respond by landing several ships off the coast of Oahu, smack dab in the middle of a training exercise involving navies from all over the world. Floating aircraft that look like something out of Skyline, the alien vessels erect a force field around the Hawaiian Islands, leaving the Naval ships inside without radar or tracking gizmos. Like the board game, our heroes are forced to engage their enemy blind. When the U.S. Navy resolves to shoot first, ask questions later, the aliens attack, and only one lowly ship remains to save the day. And no, moviegoers will not hear the line “You sunk my Battleship!”

Taking cues from Armageddon and any number of movies about mass destruction, Berg incorporates scenes of citywide ruin, complete with reaction shots from soon-to-be-dead bystanders. It’s all very familiar. An alien ship makes a crash-landing in downtown Hong Kong, toppling buildings and sending crowds running for their lives. The aliens launch metal-grinding orbs to preemptively eliminate threats, such as the nearby military base, by buzzing through them like a chainsaw through butter. And explosions. Lots of explosions. Iffy CGI renders the lizard men from space, who wear metal suits and have boney stubble on their chins. They’re also telepathic, as we briefly see one transmit their whole alien history to a human after making physical contact—an all-too-convenient expositional device also used in Ghosts of Mars and Slither.

Specific characters haven’t been mentioned yet because there are none worth mentioning. The filmmakers have padded Battleship with dull dramatic arcs and subplots, none of which are beyond cliché and predictable, bloating the runtime to more than two hours. After the first 30 minutes of build-up, the movie becomes nonstop action until the conclusion, when everyone gets awards for their acts of world-saving gallantry. John Carter himself, Taylor Kitsch, plays bad-boy Lt. Hopper, whose usual reckless behavior is subject to a crash course in heroism when he’s forced to take command. On Oahu, Hopper’s physical therapist girlfriend Samantha (Brooklyn Decker) teams with her patient, Army veteran and amputee Mick (Gregory D. Gadson), to stop the aliens from “phoning home” for reinforcements. Liam Neeson appears in an extended cameo as Samantha’s father, Admiral Shane, and spends The Fight for Earth on the sidelines, doing little except putting Pentagon politicians in their place by angrily hanging up the phone. Rihanna, Alexander Skarsgård, and Tadanobu Asano also appear in peripheral roles, while Kitsch tries and fails once again to lead a mega-blockbuster.

Scattered about the screen are dozens of actual Navy sailors, including several retired veterans—one of two commendable facets of this production. The other facet comes as a major surprise: Battleship offers no optional 3-D presentation. This means audiences can watch Berg’s chaotic battles, computer-generated scenery, and alien disaster scenes in wonderful 2-D, without the need for awkward, darkening glasses to impede their experience. Not that it matters. Despite the lack of random objects flying toward the audience, the movie makes no further attempts at integrity. Berg has spent hundreds of millions on a derivative, nonsensical sci-fi project best described by comparing it to better movies. But when those “better movies” were made by the likes of Michael Bay and Roland Emmerich, one shouldn’t have to suggest spending your time and money elsewhere.