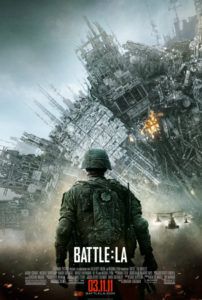 In Battle Los Angeles, Aaron Eckhart plays Staff Sgt. Nantz, veteran soldier and leader of a Marine platoon assigned to rescue civilians in LA during an alien invasion. Eckhart’s presence is the only worthwhile element in a movie designed for the sole purpose of jarring the senses with nonstop combat. To that extent, you could argue that the movie is successful, just as you could argue that it makes fine Marine recruiting propaganda or ample material for the next installment of a Gears of War videogame. Just don’t argue that the result has an involving narrative or worthwhile story to tell. Director Jonathan Liebesman and his arsenal of handheld cameras make visual mishmash out of a familiar plotline, one filled with little else beyond pyrotechnics and unintentionally funny dialogue, wherein nondescript aliens attack and America saves the day.

Coastlines near major cities the world over are pummeled by meteorites containing aliens. Drone robo-ships and marching alien hordes emerge from the ocean. Their mission: wipe out humanity so they can suck up our water, an apparent power source. The aliens may have advanced weaponry, but humans have American patriotism (“Hoo-rah!”), which doesn’t know the meaning of defeat. Nantz’s men take to Santa Monica’s streets for firefights filmed with a “really there” feel. New to his command, the platoon doesn’t trust Nantz completely, his reputation sullied by some event from his past, which won’t matter to you once it’s revealed. As Eckhart gives persistent “be all you can be” speeches, the other actors fulfill stereotype roles: the noble civilian (Michael Pena), the tough female soldier (Michelle Rodriguez), and a whole roster of indistinguishable grunts.

After a shotgun wedding between Black Hawk Down and Independence Day, this movie was the unwanted offspring—an unintelligible mixture of war movie and science-fiction that insults the credibility of both genres. Enduring the experience becomes an exercise in noise tolerance and a test of the audience’s attention span. The effect is something akin to watching as someone else plays a videogame; you wait patiently for your turn, but two hours later you realize that you won’t get to play, because someone else just beat the game. However fast-paced the production may seem, nonexistent characters and unrelenting gunfire keep the viewer at a distance. And by the half-way mark, the dramatic death scenes and explosions become repetitive white noise.

Characters other than Eckhart’s have little screen time and fewer lines outside of monosyllabic battle commands. Christopher Bertolini’s screenplay breezes over inane character introductions in the first few scenes, rushing the movie to the gritty combat so those faceless soldiers can have meaningless deaths. But the extra-terrestrial invaders are just as anonymous. Animated by CGI, they’re biomechanical things with thin metal frames and featureless oval heads. They appear mostly in shadow or silhouetted by bright backgrounds, and drive inelegant flying contraptions that look like a junkyard come to life. In every alien invasion movie, there’s a scene where the characters examine a dead alien, if only so the audience can get a good look at the enemy. Here, the shaky camerawork never allows for that moment; the closest we get is a field autopsy that involves Eckhart stabbing an alien body like a maniac to find its weak spot.

The nicest thing this critic has to say about Battle Los Angeles is that it doesn’t reach the lows of last year’s Skyline, another sci-fi actioner about a worldwide alien invasion limited to the scope of LA. Liebesman proves he’s just one more modern director devoted to fast cutting and slack camerawork, his approach completely devoid of precision or refinement. Many scenes are incomprehensible or simply baffling in their arrangement, as though Liebesman used dozens of cameras at once and hoped for the best in the editing room. Other filmmakers, such as Sam Peckinpah, have used this approach, but choose their angles and camera placement carefully, and edited with kinetic energy. Liebesman seems intent on shooting chaos so his audience will recognize the bedlam onscreen. Yet those pesky (but, go figure, necessary) filmic elements of character and narrative never materialize, leaving the audience to grow bored with relentless violence and underwhelming special FX.