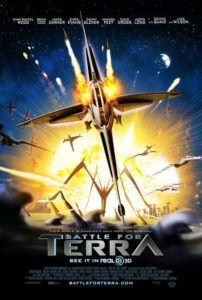 Not to be missed, Battle for Terra is a computer-animated family film, and it’s not from the top animation studio Pixar, but it is presented in 3-D—two significant strikes, both of which are minor details that viewers should ignore. Though entertaining enough to divert your children’s attention for the duration and keep them quiet in the theater, the ideas within are big enough to inspire discussion and critical thinking in youngsters. At the very least, it presents a narrative structure your children haven’t seen before.

Consider how your children would react to humans being the bad guys and aliens being the good guys. And instead of aliens invading Earth, humans are invading an alien planet for a change. The alien world is called Terra, which is Latin for “earth.” Perhaps that’s why the producers changed the title from Terra, its name at the Toronto Film Festival, to Battle for Terra to not confuse Latin-speaking children who saw Disney’s recent nature documentary Earth. (Okay, so maybe that’s not likely.)

Anyway, the film’s peaceful little alien planet is home to flying tadpole-like creatures with big expressive eyes and a funny way of floating by wiggling in the air. Their local fauna consists of likewise flying creatures, such as massive sky whales. A peaceful people, they do what their Elders tell them, living in the treelike roots of an enormous mushroom growth and not asking too many questions, because they were once a warring people reliant on technology. The main character, a reckless and curious youth named Mala (Evan Rachel Wood), likes to ask questions, of course. And when a massive moving structure appears in silhouette and blocks their sun, everyone thinks it’s a new god, but Mala wants to know for sure.

On the flipside, Earth Force has been scouting the galaxy for generations, and their broken-down ship barely sustains what’s left of humanity. Having exhausted natural resources on Earth long ago, the humans, led by a militaristic despot General Hemmer (Brian Cox), plan to invade Terra. They aim to terra-form and oxygenate the atmosphere, which would, in turn, kill the local Terranians. But when reconnaissance pilot Jim Stanton (Luke Wilson) crashes, he’s saved by Mala and sees first-hand that the planet they’re invading is filled with peaceful people. And along with his silly robot Giddy (David Cross), a mix between C-3PO and WALL·E, Jim tries to defend Mala’s planet, while both parties prepare for war.

What ensues has surprising dramatic gravity, in that more sensitive children may need the notions of genocide and self-sacrifice, themes that appear later in the film, explained to them. But for those ready for it, and indeed anyone older than a preadolescent, Battle for Terra presents unexpected theatricality on a planetary scale. The none-too-subtle implications criticize humanity’s wasteful and warlike behavior, suggesting that someday our irresponsibility will turn us into monsters. Or perhaps we already are. Long ago, the Terranians stopped their careless spending of natural resources and warmongering before it was too late. If we could be more like them, perhaps life would be better off. Teaching responsible environmental and social awareness, the film is filled with social commentaries. Maybe its messages will rub off on your children, and maybe not. Either way, it’s worth a try.

The voice talent includes James Garner, Justin Long, Danny Glover, Amanda Peet, Dennis Quaid, Chris Evans, Mark Hamill, Rosanna Arquette, Beverly D’Angelo, Ron Perlman, and Danny Trejo. Not that you’ll recognize these voices once the plot gets going. Animated movies could cut their budgets in half by avoiding that unnecessary need for celebrity name recognition on the movie poster, as if we’re rushing out to see the latest animated film because so-and-so did some voicework therein. Along with the 3-D gimmick, it’s a bad habit animation studios need to abandon.

Generic in visual concept design, the Terranians and humans alike resemble a toddler’s action figures—smooth and without much detail. However, the scope of the picture, complete with rousing dogfight battles and an incredible sense of atmosphere, lends these characters and their environment a natural feel. Canadian director Aristomenis Tsirbas and writing partner Evan Spiliotopoulos construct an involving story with an animation style that takes time to appreciate. But once you’ve accepted that the animation won’t be near to Pixar yet will surpass those Dreamworks Animation duds, you’ll realize the movie is more than kids’ stuff and become enveloped in the excitement—those grand stakes grounded in morality. How often can you say that of an animated film?