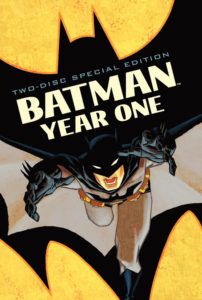 While watching Warner Bros. Animation’s Batman: Year One, I paged through my copy of writer Frank Miller and illustrator David Mazzucchelli’s graphic novel on which the film is based, and I was impressed by its devotion to the source material. Dialogue, narration, and plot in most cases follow the book almost verbatim. Directors Sam Liu and Lauren Montgomery imbue all of Miller’s depth into the pensive characters, elevating its dramatic weight above Warner Premier’s usual DC Universe animated features. Still, there was something lacking overall, perhaps linked to the film’s brief 64-minute runtime; the film isn’t as immersive or emotionally drawing as the comic, suggesting potential viewers must answer the question: What’s more important, a faithful adaptation or an adaptation that redefines itself with the new medium?

Narrated like a noir from the perspective of Lt. Jim Gordon (voice of Bryan Cranston), the story follows Batman’s first-year emergence in Gotham City. Unlike Batman Begins (which borrowed some from Miller’s book in structure), however, the audience doesn’t watch as Bruce Wayne (voice of Ben McKenzie) trains and constructs his alter ego from scratch, gadgets and all. We watch as Gordon sizes up Gotham’s police corruption, rampant crime, and Batman’s early standing as he transforms from vigilante criminal to citywide hero. A curiously small number of scenes are dedicated to Batman, who’s approached as a mystery through Gordon’s eyes. Meanwhile, Gordon has an extramarital affair as his wife Barbara is pregnant, a pregnancy he regrets taking part in, given the crime-saturated state of Gotham. For Gordon, Batman eventually becomes a beacon of hope not only for the city, but for his family.

Of course, being a Miller story, there are some questionable representations of women. Selina Kyle (Eliza Dushku) is written as a tough-as-nails prostitute, using Batman’s example as inspiration for her own masked getup. She’s nowhere near the admirable feminist and animal-rights activist that Catwoman was in Batman: The Animated Series, but she’s accurate to Miller’s story, so there’s that. This is also where the PG-13 rating comes into play, as Bruce Wayne first encounters Kyle in a neon-laden red-light district, sex shops and such filling the background. Also, the film’s violence is stained with blood and a greater potency throughout. There’s a scene where Gordon takes down the corrupt Detective Flass, dishing out a beating as brutal as you’ll ever see from a Warner Premiere title.

Had Liu, Montgomery, and longtime Warner-DC animation producer Bruce Timm followed Robert Rodriguez’s cue, they might’ve given Miller or Mazzucchelli (or both) co-director credit, as the filmmakers stay so close to the source that it almost seems like tracing. Unfortunately, the book’s deep atmospheric quality fails to translate to film. Something about the darkness of the story on the printed page enhanced it, whereas the bright colors of this film (although considerably darker than any typical Warner-DC project, save for Batman: Under the Red Hood) removes its depth. Although this could have arguably been corrected within the animation itself, here’s where a stronger adaptation from writer Tab Murphy would have helped, to broaden the groundwork instituted by Miller into an 80 or 90-minute feature. This is not to gripe about the result—which is detailed and accurate and involving, especially for those unfamiliar with the book—but perhaps I was hoping for more than what Miller and Mazzucchelli put on the printed page.

Debuting their release on video, Warner does animation itself a disservice by not giving audiences an opportunity to see the film in theaters (aside from the prescreening at Comic Con). Just by being a “cartoon”, Batman: Year One will have enough trouble earning artistic credibility. Most critics won’t review this title, for example, as its audience isn’t as widespread as your typical Dreamworks or Pixar release, yet there are plenty of major Hollywood animated films that can’t compare to the integrity behind Warner’s short comic films. If the studio offered small theatrical events (like they did in 1995 with Batman: Mask of the Phantasm), even one-night-only exclusives open to the general public, they would find their target fanboy audience flocking to see their serious-minded superhero fare on the big screen. Until Warner Bros. Animation begins treating their products as genuine films—complete with a feature-length and theatrical distribution—their releases won’t receive the attention they deserve. And that’s a shame, as moviegoers are instead forced to endure drivel like Rio or countless Ice Age movies theatrically over the quality storytelling Warner completes every year.