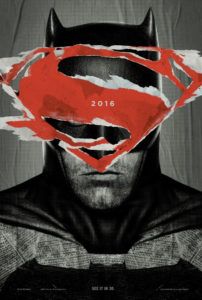 Zack Snyder’s Batman v Superman: Dawn of Justice tries to be many things at once, yet it does few of them well and none of them thoroughly enough. As the title suggests, it’s a “versus” film, pitting the Caped Crusader against the Last Son of Krypton; however, after the colon, it’s also about the genesis of the Justice League, DC Comics’ counterpart to Marvel’s Avengers. Beyond what’s signified, Snyder’s film also serves as a sequel to his 2013 effort, Man of Steel, starring Henry Cavill as Superman. Meanwhile, it’s also a reboot for a new Batman, effectively played by a brooding Ben Affleck. Four separate films could have been made from the plot of Batman v Superman: Dawn of Justice. And yet, the worst part isn’t even that Snyder’s film fails to do any one of these four films justice. The worst part is that, in trying to deliver the ultimate clash of comic book titans, as well as provide the groundwork for a superhero team franchise, Snyder delivers another joyless, self-serious blockbuster, only slightly more entertaining than Man of Steel.

In one form or another, Batman v Superman: Dawn of Justice has been a long time coming. Talk of a cinematic match between Batman and Superman has been in discussions at Warner Bros. for about fifteen years, since back in 2002, when Wolfgang Petersen (Air Force One) was attached to direct. That project fell by the wayside and remained a fanboy’s dream. But let’s not forget about the “Dawn of Justice” portion of the title either. In 2007, Warner Bros. made plans to develop “Justice League: Mortal”, featuring Superman, Batman, Flash, Wonder Woman, Aquaman, Green Lantern, and Martian Manhunter (Mad Max: Fury Road helmer George Miller was even set to direct). Due to the 2008 writers’ strike and other delays, Warner Bros. resolved to put more attention into Christopher Nolan’s Dark Knight Trilogy. When they were finally ready to start building toward a Justice League film, the studio faced another blow in 2011 when they released the solo Green Lantern feature, an absurdly cartoonish movie that displeased both critics and fans. 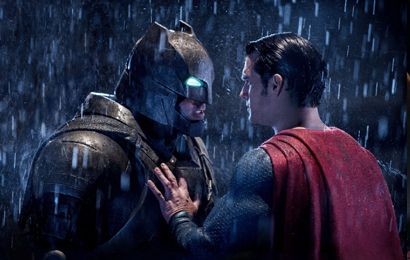 Desperate to mirror the success of Marvel Entertainment’s ever-expanding Avengers-verse, and also desperate to catch up, the studio has fast-tracked plans for a similarly diverse Justice League universe. But in doing so, they’ve rushed things. After all, before their master plan can begin, Batman v Superman: Dawn of Justice has to prove worthwhile. There’s a lot riding on this individual film and its potential to establish a much larger franchise. Given the film’s $250 million production cost and another $150 million on marketing efforts, worldwide box-office numbers will need to soar in order for the studio to earn a profit. Moreover, it’s the studio’s launch pad for several solo DC Comics superhero efforts, including scheduled productions for Wonder Woman (2017), Aquaman (2018), The Flash (2018), and two Justice League features. Their model mirrors Marvel’s plan and the several films surrounding that unprecedented franchise. Still, as with Man of Steel, Snyder’s production contains sweeping, grandiose imagery, but little emotion.

Screenwriters Chris Terrio (Argo) and David S. Goyer (Christopher Nolan’s Dark Knight Trilogy) have a lot to accomplish to develop the film’s numerous plot strains. They must establish an adequate backstory for their newly imagined Batman; they must deal with the ramifications for Superman and the world after he all but destroyed Metropolis in Man of Steel; they must establish a conflict between Batman and Superman; they must introduce classic characters like Lex Luthor, Wonder Woman, and Doomsday; they must show how our heroes come together against their common foe; they must introduce periphery heroes like Flash, Cyborg, and Aquaman; and they must lay the groundwork for future sequels. Even with all of this, they still manage to incorporate a subplot about a disabled victim (Scoot McNairy) and a U.S. Senator (Holly Hunter), both of whom want to hold Superman accountable for blowing up half of Metropolis. There’s so much going on in this blockbuster that, regardless of the giant-sized 153-minute runtime, many of the film’s various storylines feel underdeveloped. (And it’s all sort of moot, since Frank Miller thoroughly explored what would happen if Batman and Superman clashed in his epic comic series The Dark Knight Returns, from 1986.) 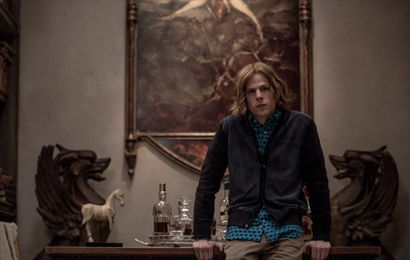 The film opens with shots establishing how young Bruce Wayne witnessed his parents’ murder—as if we needed to see his origin story again—after a screening of John Boorman’s Excalibur (1981), which instantly links Bruce with a predilection for the theatrical and legendary. Then, the film cuts hard to the cataclysmic battle between Henry Cavill’s Superman and General Zod (Michael Shannon), which killed thousands and left Metropolis in shambles at the end of Man of Steel. This time, the sequence is experienced at ground level by the graying Bruce Wayne (Ben Affleck), who maneuvers through crumbling buildings and witnesses tragic civilian death as a result of the overhead alien battle. In the aftermath, Bruce tries to secure himself some Kryptonite to possibly end Superman’s reign of uncontrollable heroism. Meanwhile, Batman’s brand of justice in Gotham City is savage, likening him with Marvel’s The Punisher, complete with bat-symbol brandings, stabbings, and an onscreen death toll in the dozens. This interpretation of Batman may disturb some longtime fans, but Snyder’s view of DC heroes and villains is anything but traditional.

Consider the high-pitched, wacko antics of Lex Luthor, here played by Jesse Eisenberg under a scruffy mop of hair, a lunatic stutter, and a penchant for mad ramblings. Eisenberg plays Luthor as the comic book version of his Mark Zuckerberg from The Social Network, being an over-privileged megalomaniac who rants about whatever flutters into his mind. Luthor’s snarkiness feels inappropriate for the character, and ultimately he ends up feeling like a combination of Dr. Frankenstein and R. M. Renfield—a creator of a beast (Doomsday), and a servant for a forthcoming master, presumably Darkseid (DC’s counterpart for Marvel’s Thanos). Luthor is anything but frightening. He’s annoying. But then again, there’s never been a truly imposing version of Lex Luthor onscreen. Gene Hackman played a version underneath a hairpiece in three of four Christopher Reeve-Superman movies. Hackman’s Luthor also operated in a sewer lair and had Ned Beatty as a bungling sidekick. Kevin Spacey proved a little more imposing in Bryan Singer’s defunct Superman Returns (2006), though he wasn’t immune to moments of cartoonish absurdity either.

On the periphery, a particularly wondrous woman (Gal Godot) catches Bruce Wayne’s eye and seems to have secrets of her own—she’s one of many “meta-humans” being watched by Luthor. Also, Bruce experiences cryptic dreams about a post-apocalyptic world and time travel, undoubtedly hints to future sequels. Amy Adams reprises her role as Lois Lane, if only to be rescued three times by Superman. And finally, the story proceeds as Batman takes on Superman, though both heroes have been manipulated into the fight by Luthor. When our heroes face one another, their battle easily consists of the film’s best 10 minutes. Sadly, their combat is interrupted by a slobbering beast of Kryptonian origin and unexplained powers, known as Doomsday, famous from the comics because he killed Superman in 1992. (Also, Doomsday looks a lot like the monster Abomination from The Incredible Hulk.) The final showdown between Batman, Superman, Wonder Woman, and Doomsday is a CGI-animated mess, causing the viewer to shut down any brain activity and watch the flickering lightshow, wholly detached. The special FX work is often wowing, but that hardly matters when the character development leaves us feeling flat and uninvolved. 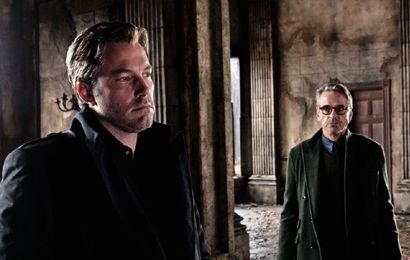 Cavill’s Superman remains devoid of personality—an absolutely boring character. This is less the fault of Cavill than the screenwriters, since the actor demonstrated he has charm to spare in Guy Ritchie’s The Man from U.N.C.L.E. last year. No doubt, after Man of Steel, reactions to Cavill’s Superman resulted in the studio making a sequel with Batman as the lead, and a more well-known star in the role to boot. Affleck’s immediate weight and screen presence make him a charismatic Bruce Wayne and arresting Batman. (Affleck’s solo Batman film, which he’s set to direct sometime in the immediate future, seems promising.) Elsewhere, Godot makes a fine Wonder Woman in her few scenes, although the character seems obligatory here. There’s barely any explanation for her powers, so unless you’re already familiar with her bracelets and lasso, you’ll be scratching your head when they appear. But perhaps the picture’s finest casting is Jeremy Irons as Bruce Wayne’s loyal butler Alfred, who warns Bruce, “Even you’ve grown too old to die young.”

Snyder’s film has several moments of greatness (the rumble between Batman and Superman is a doozy), but they never come together into a whole. Had the story just been about Batman and Superman’s opposing ideologies to superherodom (vigilante justice vs. emblematic responsibility), the film would have been much more dynamic. Instead, the heroes bond against a common opponent for a typical demolition-infused finale. Snyder and his writers breeze through every plot element, while editor David Brenner seems incapable of holding any of lenser Larry Fong’s crisp shots more than few milliseconds. And the electric guitar-infused score by Hans Zimmer and Junkie XL sounds like it’s conducting a rock opera. Many scenes feel artificially composed of CGI backgrounds and atmosphere, whereas the quieter, more human scenes with Affleck resonate far more. The superhero action is distracting for a while, but eventually, our eyes begin to gloss over and we lose focus—I believe the effect is called “mind-numbing”.

All of this attention on action over narrative, and the uneven, passionless storytelling, amount to disappointment. Not that this critic’s expectations were particularly high (Man of Steel curbed any real enthusiasm I may have had for another Snyder-directed superhero film). But I want to see a great film about Batman fighting Superman, and I want to see a great film about the Justice League. Regrettably, this scattered, ambitious effort sets out to achieve too much and doesn’t accomplish enough, leaving fans to seek out Warner Animation’s The Dark Knight Returns and Justice League: The New Frontier for truly worthy versions of these stories. Any one of Batman v Superman: Dawn of Justice’s many plot strains could serve as a stand-alone film, but Snyder has never been a filmmaker to decelerate for the sake of his story—he’s more interested in spectacle, while Warner Bros. was more interested in building a franchise than a single great film. Thus, the film operates in narrative broadstrokes, leaving many interesting ideas underexplored. Let’s hope, if Warner Bros. carries out their plans for an expanded DC cinematic universe, they give these stories room to breathe. Alas, Batman v Superman: Dawn of Justice suffocates us with plot. It neither declares a victor in the titular battle, nor leaves us particularly excited for the eventual gathering of the Justice League.