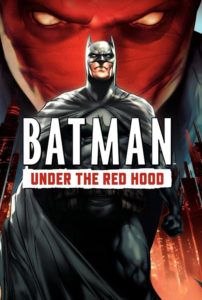 Batman has always been a character whose storytelling prospects more often than not overshadow his appearances in comics, movies, and various other pop-culture. This is the sad truth of most iconic superheroes; their legacy outperforms the material that constructed it. With the campy 1960s television show, four underwhelming movies, and comic books that seldom grasp the depth of the character, finding great Batman stories is a rare luxury. Some may look no further than Batman Begins and The Dark Knight, an approach that’s hard to dissuade. But the 1990s television show Batman: The Animated Series stands as possibly the best amalgamation of the character’s dark tone and comic style. The show’s creators have gathered once more to make another animated Batman epic, this one unrelated to their previous series.

Warner Bros. Animation’s Batman: Under the Red Hood comes from Warner Premier, which debuts DC Comic-centric features, (usually) PG-13-rated, on home video for cheap, often resulting in a hefty profit and appealing primarily to the apologist fanboy crowd. Though starting strong with Justice League: The New Frontier and Wonder Woman, the animation in their recent releases has faltered. Watch Superman/Batman: Public Enemies or Justice League: Crisis on Two Earths and you notice that they feel no different than Nickelodeon cartoons, whereas the company has avowed to elevate its comic stories above typical cartoons through their generally superior storytelling. With this objective, Warner has failed to meet their high aspirations in most cases, but their latest effort reminds us why this studio should be considered one of the great animation studios in the business.

Based on the comic storylines “A Death in the Family” and “Under the Hood”, the movie is separate from the continuity of The Animated Series, much to fanboy chagrin. Though producers Bruce Timm and Alan Burnett and voice director Andrea Romano are behind the project, alas, fans will miss the aural appearances of Batman voice actor Kevin Conroy and Mark Hamill’s signature Joker. They’re replaced, respectively, by Bruce Greenwood and John DiMaggio, whose voices are both more gruff and serious, aligning with the Christopher Nolan approach to Batman. But their voices are also less iconic, or simply less known as those characters, creating a minor distraction as the movie begins.

The story follows Batman as he attempts to discover the identity of a new villain called “The Red Hood” (voice of Jensen Ackles), who has bribed or killed most of Gotham City’s criminal underworld. The established kingpin known as The Black Mask (voice of Wade Williams), a Scarface-like gangster with a black skull-face, hires everyone he can to take down his new competition, but the Red Hood anticipates every move from both Batman and Gotham’s criminal element. Though Batman tracks down the Red Hood with the help of Dick Grayson, his first Robin known now as Nightwing (voice of Neil Patrick Harris), the villain easily escapes. Who is this mysterious figure? How does he seem to know Batman’s methods front and back? And what does this have to do with The Joker, Ra’s al Ghul (voice of Jason Isaacs), and Jason Todd, the second young orphan to don the Robin mask and who was murdered by The Joker?

Whereas the twist of the Red Hood’s identity is obvious, the substance and atmosphere of the mvoie prevails. This is dark animation, filled with blood and violence in a noirish color scheme of blacks and grays that earn the PG-13 rating. The majority is hand-drawn, except during complex action sequences where vehicles and backdrops are rendered with computers. The characters feel attuned to adult emotions, but that’s counteracted by the fantastical comic book battles. And instead of resorting to mere action, the movie resolves to bring some weighty emotional purpose to Batman legend—adding to the character’s already deep rooted inner pains. Of course, director Brandon Vietti has obviously siphoned inspiration from Nolan’s Batman pictures, both in style and tone. What’s more, the movie’s thick bodied, deep-voiced Joker behaves less like the raving lunatic of The Animated Series and more like Heath Ledger’s murderous sociopath in The Dark Knight.

The lack of Conroy and Hamill, and the rest of The Animated Series’ voice cast, does the movie an unfortunate and unintentional disservice. With the animation style closely following The Animated Series—with only a few slight, superficial alterations, such as the thicker, cracked visage of The Joker—viewers familiar with Warner’s previous DC Comic animations will have trouble reconciling what’s onscreen and what they’re hearing. It seems a rather simple detail with which the filmmakers could have coddled their target fanboy audience. After all, if a videogame like Batman: Arkham Asylum can gather the voice cast that audiences/gamers want, why shouldn’t the production team that made them the gold standard?

Still, Under the Red Hood is an entertaining piece of animation. It can’t help but inspire Bat-fanatics to return to The Animated Series, where Warner Bros. Animation both found its bearings and reached the height of DC Comic adaptation. Moreover, the movie will no doubt begin questions into whether or not Black Mask will appear in Nolan’s third and final Batman film (it’s one of many rumors for the yet-unannounced villain, along with The Riddler, Catwoman, et al.). So here’s a worthy movie that redeems some of Warner Premier’s lesser titles, offering a one-shot experience that’s easily disposable for general audiences, but a must-see for fans of animation, Batman, and general comic book fare.